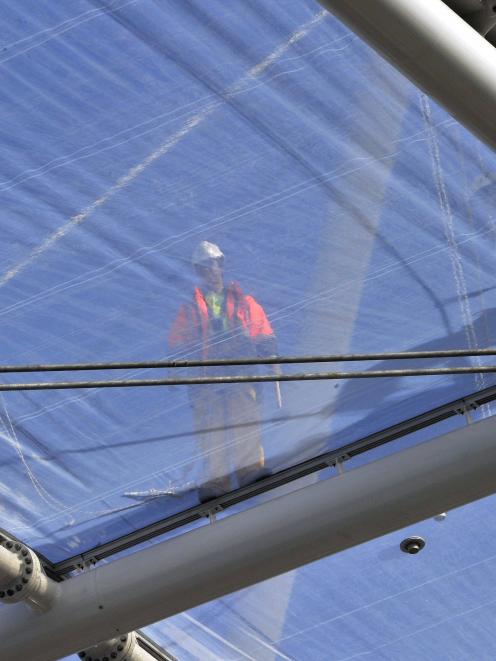 The Carisbrook Stadium Trust yesterday gave the Dunedin City Council an update on the project, including a new time-line, or "milestone summary", for the construction.

That showed the stadium fit-out was expected to be completed by June next year, with trials due in July.

The landscaping and plaza was due to be complete by August, one month before the Rugby World Cup.

Pitch construction was expected to begin this month, "with acceleration options being reviewed to interface with the slower-than-expected progress of the structural steel".

Trust chairman Malcolm Farry said last night that meant because of hold-ups getting steel on to the site, now that three trusses were in place, work on the pitch would start while the final two trusses were being put in place, rather than waiting until they were all up.

The turf work was expected to be completed by April next year.

Councillors also heard that the recent Christchurch earthquake, felt in Dunedin, had not affected the stadium.

At a finance and strategy meeting, Mr Farry said while the time-line had been included in the report, he did not want councillors to think it was "set in concrete", as there were variations to the build "almost on a daily basis".

Cr Richard Walls asked where having three of five trusses in place put the construction programme, and was told by Arrow International projects director Lale Ieremia the next two trusses were always to have been put up between now and Christmas.

The time-line showed the roof structure in place by January next year.

The "simplistic" answer was there were two to go, and three months to complete the workThe construction team was now "a little bit more comfortable" it had time to do the work, even in the event of bad weather or high winds.

Mr Farry said the time-line provided yesterday was "the one we're working to", and had been provided because of confusion about the issue in the community "as to whether we're on task or not".

Cr Chris Staynes asked whether a March-April 2011 finish date in the time-line for the ETFE roof was critical, and was told by Mr Ieremia it was, "if we [want to] keep on track".

Cr Kate Wilson asked if there had been any effects on the stadium from the recent Christchurch earthquake, and was told by Mr Ieremia there were "none so far".

The stadium was built to withstand a one in 1000-year earthquake, as Dunedin was considered a "medium-risk" area, compared to Christchurch, which was low risk.

Asked by Cr Colin Weatherall if he expected problems for yet-to-be-tendered work, considering the amount of work that needed to be done in Christchurch would attract contractors to that city, Mr Ieremia said he did not expect that to affect the stadium.