Roped into a really top job 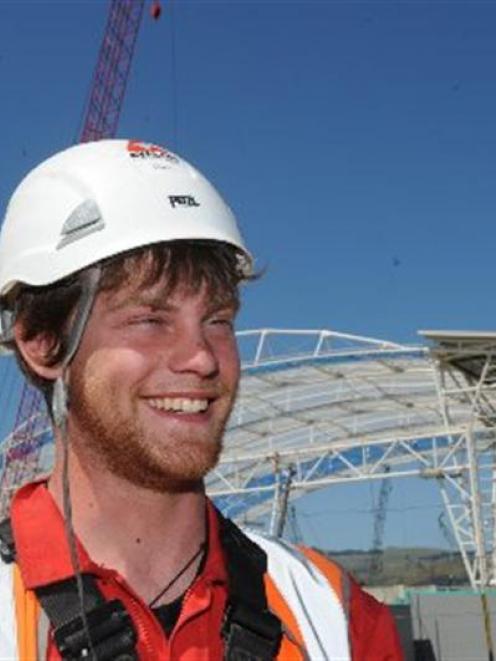 Not even the early morning starts, the occasional southerly gale or the 37m drop below can dissuade the 25-year-old from donning his safety harness each morning.

It is a job Mr Price has fallen in love with, and one that he has travelled half-way around the world to do.

The foursome include two other English workers and one from Scotland, who together formed the heart of an 11-strong team of "rope-access technicians" on the project.

Mr Price compared the work to a giant jigsaw puzzle, with each piece of steel, or ETFE cell, having only one designated space to fit.

The roof workers spent their days clambering about the roof's steel frame, and across temporary blue access nets, assembling the parts while tethered to a 11.5km-long network of safety ropes, he said.

While icy winter morning or spring winds over 72kmh could stall their progress, the view from the top on a sparkling spring day was among the best from any workplace in the city, he said.

"There's a pretty good view from the roof of the surrounding area. You can see a fair way on a clear day," he said.

Mr Price and his three international colleagues each held the highest level three certification in their trade, meaning they were experts in the climbing, lifting and rescue techniques - as well as the book work and theory - required of their high office.

Mr Price was persuaded to come to Dunedin after spotting an online advertisement for roof workers posted by New Zealand company Avalon, a subcontractor on the stadium construction project.

Avalon was established in New Zealand by two UK immigrants with a background in engineering and caving, and its workers also helped with the redevelopment of Auckland's Eden Park.

The technique required caving, climbing and abseiling skills to provide an alternative to scaffolding and other more traditional approaches to construction projects, which were not practical on a project the size of the stadium, he said.

Mr Price's days begin with a safety briefing about 7am, and continue for 10 hours with only two half-hour breaks each day.

He left a "dead-end job" at a McDonald's restaurant in Nottingham to take up his new role in 2003, after being encouraged by his mother, a fellow climber and rope-access worker, and had not looked back.

His jobs since had included a two-month stint in Texas, abseiling down 137m wind-farm turbines while maintaining the machines, and more recently helping build the roof of the 2012 London Olympic Velodrome.

Safety systems meant an accident was "incredibly unlikely" and vertigo was not an issue, but a slight touch of nerves remained and was a good thing, he believed.

"The longer you work for the less nervous you are, or the less time it lasts for, but it's good to be a little bit nervous because it makes you check your gear again."

Mr Price planned to remain at the stadium site until the roof work was completed early next year, before travelling around New Zealand and then looking for work in Australia.

He was not yet sure what his next project could be, but doubted it would involve a desk.

"I would still be abseiling somewhere. I don't think I could do anything else, really."