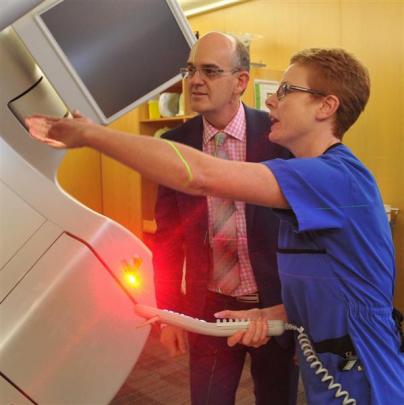 Health Minister Tony Ryall says public investment in health services in Dunedin is ''quite good'', but the Government is not getting enough credit.

The Southern District Health Board had been able to hire 160 extra doctors and nurses because of funding increases.

The extra staffing needed to be taken into account in the current debate about the South losing a range of public sector jobs.

''It's disappointing that in this whole debate there's been no reference to the fact that there have been 160 extra medical and nursing positions created at Southern since 2008.''

Requests for further investment at Dunedin Hospital - such as a long awaited upgrade to the gastroenterology facility - would be considered alongside the needs of other parts of New Zealand.

''I think your attitude is that you think it's a problem [lack of investment] with our Government. What I'm saying is, actually, it's tough times. The priority has been Christchurch.''

There was also need for major capital spending on Grey Base Hospital in Greymouth.

He pointed to the $24.4 million capital works at Dunedin and Wakari Hospitals signed off in 2010, funding multiple projects, including a new paediatrics/neonatal intensive care ward.

Money was ''raining down'' in budgets under the last Labour government, and questions should be asked about Labour's investment in Southern health during its nine years in power, he said.

Asked if patients should blame Michael Swann if they could not access services, he said the massive fraud undoubtedly extracted a lot of money from the local health system.

''Certainly, services must have been affected.''

He refused to comment on Mr Swann's release, saying it was a legal matter.

Health indicators such as access to specialists and elective surgery showed patients here had better access to services than in the past, he said. The health board still faced challenges getting itself out of deficit.

Mr Ryall said the challenge of health funding was allocating money through the country when some areas had a growing population, some were stable, and others, mainly in the South Island, were ''depopulating''.

Everywhere he went, health boards complained they did not get a fair deal from the population-based funding formula, which made him think it was getting things about right.

He could not speculate on how many jobs would go if Dunedin Hospital's kitchen was downgraded, which was being considered under a Health Benefits Ltd proposal, but a lot of the food would still need to be prepared locally, he said.