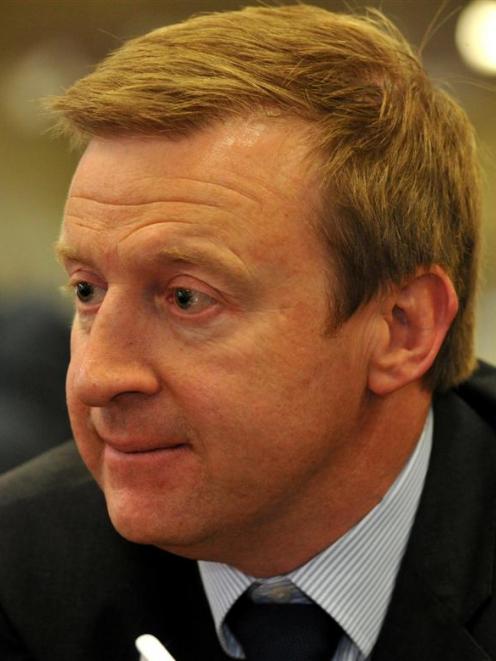 Jonathan Coleman.
It would be wrong to characterise the Southern District Health Board as an ''unhappy DHB'', new health minister Dr Jonathan Coleman says.

Just days into the job, Dr Coleman visited Dunedin on Friday to meet clinicians and managers from the health board and primary care sector.

Speaking at Dunedin Hospital, he played down tensions that have been prominent in the media recently, saying he spoke to happy and engaged clinical leaders on his visit.

''Obviously, there has [also] been some people in the papers who aren't that happy.

''It would be a mistake to characterise this as an unhappy DHB, because what can happen is you can talk the morale down, and it can get into a downward spiral.''

Ministry of Health officials have briefed Dr Coleman on the southern health service change plan set to be released next week for consultation. It is expected to be controversial, but Dr Coleman was quick to give an assurance it was not a radical shake-up.

''There's not going to be any big sudden change in any regard.

''I've said to [the DHB] anything that changes over time, they've got to take the public with them.''

Before signing off a build plan for Dunedin Hospital, decisions had to be made about how the region's health services would be delivered.

It's likely to involve shifting services to GPs and regional hospitals.

To what extent would be laid out in next week's health plan, and the public needed to get involved and have a say, he said.

The ''way of the future'' was care delivered by GPs and other community-based health practitioners, including managing chronic conditions in general practice rather than by hospital specialists.

The Government needed confidence the board was financially sound before signing off the new hospital. Unlike predecessor Tony Ryall, who suggested the Cabinet would consider a Dunedin Hospital business case next year, Dr Coleman is giving no such time frame.

However, Dr Coleman is giving the board the same message as his predecessor on funding, saying it received $850 million a year from the public purse.

''The issue is really how that money is spent.''

Dr Coleman was asked about the board's surprise U-turn on the Lakes District Hospital upgrade, in Queenstown, which it now says it cannot afford.

''It's an issue that needs to be settled in the long term,'' he said in response.

He had had no official advice on the Queenstown matter.

Asked about cost-cutting team Health Benefits Ltd, which has created unease among lower-level health board workers waiting to hear if they will keep their jobs, he said it was one of his priorities.

''I will be looking very closely at the HBL situation.''

Asked if HBL had been a success, he said ''the jury's out on that''.