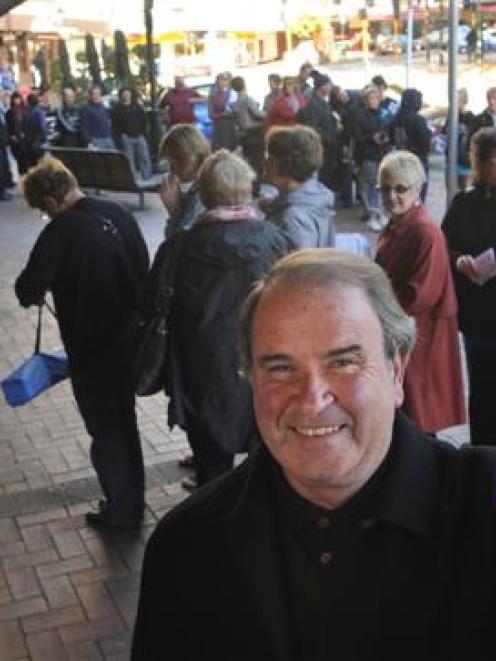 Mike Bird, of Dunedin, with his Elton John concert booking ticket, in front of the queue of people outside the Regent Theatre yesterday morning. He started queuing at 5am and secured 20 tickets for family and friends. Photo by Peter McIntosh.
A second Elton John performance is possible after a rush of opening-day sales for the entertainer's November concert in Dunedin.

Many prospective purchasers, however, struck problems, frustrations, or both.

Promoter Phil Sprey, of Wellington, said 73% of tickets had sold by 3pm and he now expected the concert to be a sell-out.

"I'm very happy with the way it's started.

"Some seating sections have already sold out, but there are still a few seats left."

When sales to the general public open next Monday, there could be no tickets left.

Mr Sprey said that if the first concert sold out and "there was enough steam in" a second concert was "a possibility".

"Our focus has always been on trying to negotiate a second concert," he said.

More than 100 people queued at both the Regent Theatre and the Edgar Centre yesterday ready for the box office to open at 9am.

However, some left disappointed.

"A man came out of the Edgar Centre at 8.45pm and told everyone that they weren't accepting a Dunedin rates bill and that it had to be an Otago Regional Council bill or an ODT subscription number. Fortunately, we had our ODT number," Murray Fraser said.

"A lot of people were really peeved off."

Matt Menzies described the ticketing operation as "a fiasco" after he had to pay an extra $240 to secure seats.

"Then we got a call at lunchtime to say it wasn't all right after all.

"The $110 tickets we wanted were all gone and the only tickets available were more expensive."

Maureen Rush began ringing TicketDirect at 8.45am, intending to get three $130 tickets.

Some customers who went online also came away empty-handed An Elton John fan calling herself "Kiwi Girl"said she logged on at 8.45am and was still waiting 55 minutes later.

"Those of us there at 9am got placed in the queue of nothingness," she said.