Stadium: Positive vibes, but still work to be done 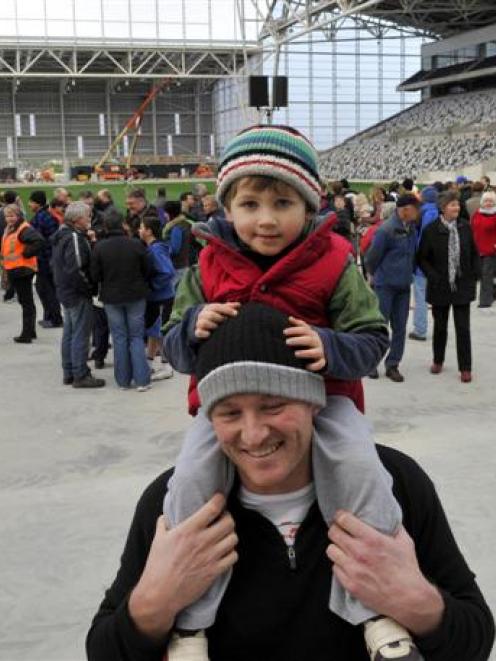 John and Archie (3) Hyslop said they liked what they saw during an open day at Dunedin's Forsyth Barr Stadium on Saturday. Photo by Craig Baxter.
Thousands of people had a peek inside Dunedin's newest sporting arena on Saturday.

Forsyth Barr Stadium is due to be completed by August 1, and people were allowed to the edge of the grass to make their own assessment of progress so far.

Organisers counted 11,850 people entering the stadium gates between 11am and 2pm - a near-constant queue testament to the interest in the multimillion-dollar project.

And the verdict? It seems they liked it.

Comments like "it's much bigger than I thought", "it's awesome", "so warm; I love the roof" and "the grass looks really amazing" were the most common.

Graeme Wyllie, of Green Island, said he thought it was "absolutely brilliant".

It was going to be a great asset and "huge" for Dunedin.

"The key thing is it's going to be used for lots of stuff, lots of sport, the university, not just rugby."

His son Conner (12) was amazed by how big it was inside.

"It doesn't look that big from the outside."

Dan Templeman, of Dunedin, described the stadium as "epic".

"Clearly, it's what we've needed for a while, and now we've got. It's something Dunedin can be really proud of."

Some were pleased they no longer had to sit in the cold at Carisbrook, others happy the seats were close to the field.

There were a few niggles.

One person reckoned the closest car park was "practically on the other side of town" and worried what it would be like when 30,000 people were at an event; others were disappointed cricket could not be played there; some thought the grass looked a little "fake".

Feedback had generally been positive, and he was gracious about that, but said he also recognised if people were motivated enough to turn up they were looking to be impressed.

"We also need to recognise there are lot of people who still have doubts and we musn't rest on our laurels. We've got to win those people over."

A gold-coin stadium entry donation raised a little more than $21,000 for the Otago Medical Research Foundation.