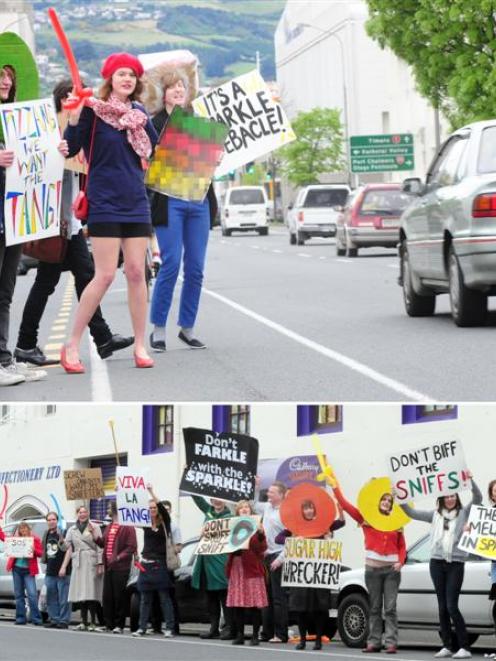 Sugar Liberation Army members demonstrate outside Cadbury Confectionery, in Cumberland St, Dunedin, yesterday. The group is opposed to the company's decision to discontinue several well-known confectionery products. Photo by Craig Baxter.
It may not sound as serious as demonstrating for the environment, world peace, or democratic rights, but a group of Dunedin protesters say a campaign to save some favourite sweets is anything but tongue in cheek.

SLA members claim to be serious about saving endangered confectionery.

"We are deadly serious. Confectionery is important. I might only have Sparkles once every two weeks, but I like having that choice," Ms Paterson said.

People should protest more often against changes to food which had sentimental appeal, she said.

The SLA, whose revolutionary heroes included Fidel Castro and Willie Wonky, could not rule out further action if other "icon foods" such as Marmite and Weet-Bix faced the chop.

Although the immediate concern was saving "the big three" - Snifters , Sparkles and Tangy Fruits - members had discussed a shortage of "decent licorice straps".

Whether the demonstration was light-hearted fun, a "Dada" social experiment examining the media response to well managed publicity, or a serious effort to save "the big three", the group showed enthusiasm for a cause is all important - the protest drew a rowdy response from most motorists and passersby for more than an hour from 5.30pm yesterday.

Earlier this week, Cadbury-Schweppes Pty Ltd corporate communications manager Daniel Ellis said since early 2007, the company had increased the number of outlets selling the confectionery, in an unsuccessful bid to lift sales of the products.

Production of the sweets stopped in June.