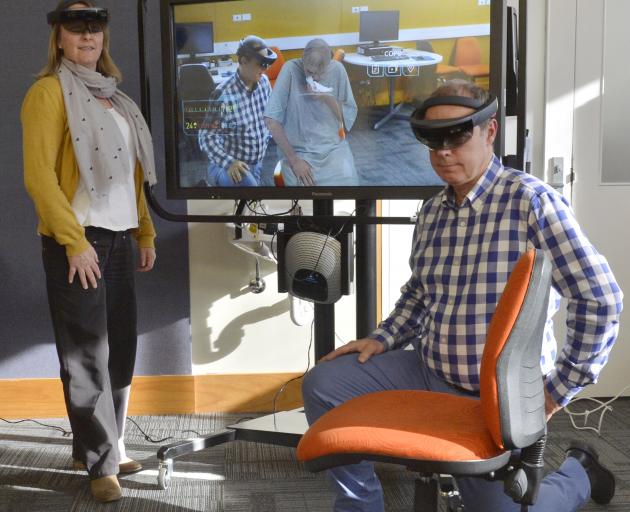 Nursing School head Ian Crabtree kneels beside a seated holographic patient, who is invisible to principal nursing lecturer Emma Collins although she is able to see both Mr Crabtree and the patient on a screen. PHOTO: GERARD O'BRIEN
The amazing world of augmented reality is about to enter nursing training at Otago Polytechnic.

The polytechnic is working with international company Pearson, which has developed interactive applications that tap into Microsoft's HoloLens, a headset which projects high-definition holograms into a viewer's surroundings.

The cutting-edge technology allows nursing students to see 3-D images of the human body, including organs. The students can highlight specific areas of the body and any of the organs and assess relatively common conditions they might not experience on clinical placements.

Nursing School head Ian Crabtree said the use of the interactive tool put Otago Polytechnic at the forefront of learning and teaching technologies.

"It's a very different way of learning," he said.

"And it better prepares learners for real-world situations. They can visualise what they are being taught, the theory they have read.

"Imagine a scenario in which a `patient' has gone into anaphylactic shock. The students can sit the `patient' down and walk around him.

"When they do that, they'll see he's got an injury on his back. From there, they can deduce he might be having a reaction to the antibiotics he's taken for the injury," Mr Crabtree said.

Pearson trainer Linda Bush, who is training nursing school staff in the use of the technology, said using the special untethered (cordless) headset, which had miniature cameras and screens, was "like wearing a computer. Basically, it's an internal projection system but you see the image out in front.

"Using the holographic images provides a sense of presence."

Several headsets allow students and their tutor to interact with the same holographic figure.

Mr Crabtree said that once the staff had been trained in the system, it would be introduced to second-year students before the end of term and would be implemented more fully into the Otago Polytechnic nursing programmes next year.

The polytechnic is one of seven nursing schools to be part of an early adopter programme. The other six schools are in the United Kingdom, Australia and the United States.