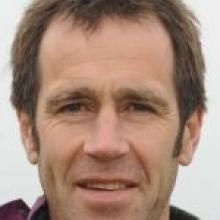 Scott Willis
It was a great idea: erect a wind turbine or two and generate enough energyto power the entire Waitati-Blueskin community.

The plan is still firmly on the agenda, but project manager Scott Willis has discovered putting up the turbines might be the easy bit.

What the Blueskin Resilient Communities Trust is attempting is ground-breaking, he says. If all goes according to plan, 700 to 1000 householders will become New Zealand's first "prosumers" - electricity producers and consumers - getting their electricity from a cluster of three or four wind turbines.

It could be another two years before any turbines are installed, but much has been achieved since the idea was first raised five years ago.

Funding has been obtained to employ Mr Willis to drive the project forward, possible turbine sites have been investigated and weather stations have been set up to monitor wind. Discussions have been held with possible generation partners and a memorandum of understanding has been signed with Our Wind Ltd (Owl), part of the Christchurch turbine manufacturing company Windflow Technology.

Last month, Owl erected a 10m-tall tower for the next stage of intensive wind testing.

Asked if the project has turned out to be more difficult than he expected, Mr Willis' reply is an emphatic "yes".

"If I had known how complex it was going to be I would have looked for another job. But what buoys me is the huge interest from virtually everyone - companies, individuals and other communities."

Windflow Technology's turbines are 30m high and have a two-blade rotor with a 30m span. The preliminary cost of the turbines and installation is $4 million to $6 million.

How the project might be funded has not been finalised.

New Zealand's electricity marketing regulations, which Mr Willis describes as "the most complex in the world", do not allow the trust to supply only to its own customers. Instead it must enter into an agreement to sell electricity to a retailer and arrange for that retailer to supply its customers.

While houses in Blueskin Bay will not be powered by wind energy alone, they might as well be, he says.

"We have been told that electricity from our turbines will be embedded in the local grid, which means it won't be going too far from the Blueskin area."

And he says the more energy-efficient shareholders become, the more electricity which can be exported further afield, bringing in revenue the trust can use to boost dividends for shareholders.

Unlike many other countries, there are no incentives available in New Zealand for those wanting to generate from wind and other renewable sources, Mr Willis says.

The two most common incentives globally are feed-in tariffs, which give small electricity generators a guaranteed price for their product, and renewable energy portfolios, which require electricity retailers to purchase a substantial portion of their energy from renewable generation sources.

Mr Willis says he cannot understand why New Zealand does not have incentives, especially as the Government has set a target of producing 90% of the country's electricity from renewable sources by 2025.

"Incentives could certainly help projects like ours. The Government needs to underwrite new [renewable source] developments. It could be cost neutral, with the Government offering loans which generators would repay over time. But introducing incentives needs political will, and I don't see any of that."