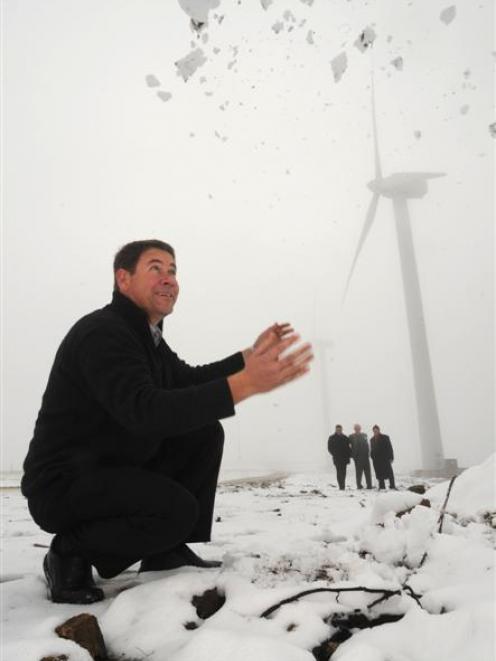 About 5cm of snow settled on the Mt Stuart wind farm yesterday, prompting Pioneer Generation to hold its official opening in the Waitahuna Hall instead of on-site. More than 100 people attended.

Pioneer Generation chief executive Fraser Jonker said the project was completed ahead of schedule, and the company was pleased with the support from the community during the project.

He said Pioneer Generation was looking at six sites for possible wind farms, with most of the testing stations in Clutha, with one on the Clutha-Gore border, and another in Southland.

The Mt Stuart wind farm uses nine 850kW wind-turbine generators, each with a three-bladed rotor 52m in diameter, and a tower height of 45m. They are expected to each produce 2845MWh of electricity a year.

Resource consent was granted in 2010 for the 7.65MW wind farm on the southwestern side of the Manuka Gorge. It aimed to produce enough electricity to meet the annual energy needs of about 3350 homes.

Farmer Rob Hewett, who owns the Mt Stuart land, said the wind farm was great for everyone, especially the community. He said he floated the idea for a wind farm in 2004, and began measuring wind for a few years, before a larger testing station was created. Later, the site was considered to be viable for a wind farm.

"There's 3000 homes getting power from here - all used locally. It's great for the community, great for everyone really. It's a bit like eating your own veges."

Power generated at the site was used in Balclutha and Milton as well as the area surrounding Mt Stuart.

Mr Jonker said the energy generated by the wind farm was not fed in to the power grid.

Pioneer Generation, based in Alexandra, is 100% owned by the Central Lakes Trust. It owns and operates 13 hydro-electric power stations and one wind farm in Central Otago and Southland.

Mr Jonker said the company was still looking into hydro development, with a probable 50/50 split between hydro and wind interests.

The opening was held in conjunction with Global Wind Day, an annual international celebration of wind energy in 40 countries.

"New Zealand's wind resources are among the best in the world, and the role of wind energy for electricity generation is steadily increasing," Mr Heatley said.