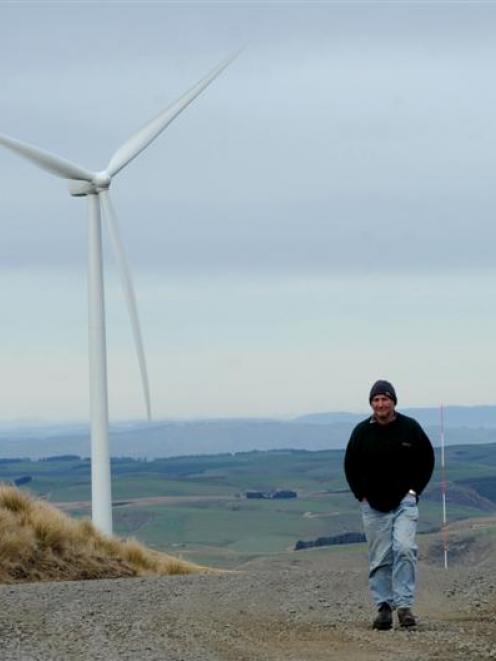 Mahinerangi farmer Richard Reid walks among TrustPower's Mahinerangi wind-farm turbines. Photos by Peter McIntosh.
By year-end, wind turbines in Otago and Southland will be producing enough electricity to power an estimated 36,000 homes, and developments which would increase production 11-fold are on the drawing board.

To supporters, wind turbines are a graceful, pollution-free way to produce electricity. To detractors, they are a blot on the landscape.

But to those on both sides of the debate, it seems size does matter. 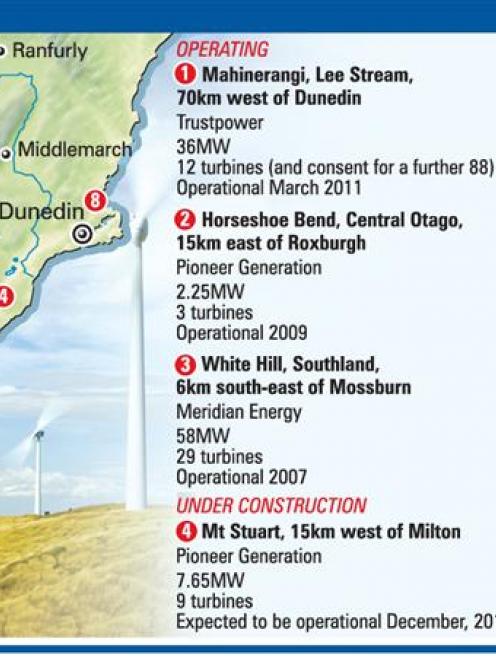 So it is perhaps not surprising that visitors to Robert and Jill Reid's Mahinerangi Rd farm look from their garden across to the 12 TrustPower turbines on the nearby hills and comment to their hosts the turbines "don't look that bad".

"When I tell them there are another 88 turbines to go up they are amazed," Mr Reid says.

Even with only 12 turbines operating, the Mahinerangi project is the first large-scale wind farm in Otago. At 100 turbines, it would be the largest in the South Island by far - at least for now.

The Reids and several of their neighbours were vocal detractors when TrustPower applied for resource consent for the wind farm, not least because of the scale of the proposal.

Now, with low winter sunlight flickering off the slowly-rotating blades and the red light atop each turbine "constantly flickering" throughout the night, the Reids are no happier about the stranger in their midst.

"They are still a blot on the landscape. In our landscape we are used to birds and not much else," Mr Reid says.

Landowners like himself have "been squashed ... by the corporates" and the arrival of the wind farm was inevitable, Mr Reid says.

"They are dictating what goes into our neighbourhood, and that's wrong. But it's too late now, we're stuck with it. It's gone through the court process and there is no way we can do anything about it now.

How many wind turbines are too many?

Pioneer Generation, wholly owned by the Central Otago Lakes Trust, has found a niche constructing small-scale wind clusters. It completed the three-turbine Horseshoe Bend development near Roxburgh in 2009 and is now installing nine turbines at Mt Stuart, west of Milton.

"Our developments are smaller, we are a locally-owned company and probably we are easier to deal with."

Like larger wind-farm proposals, the main opposition is about turbines' visual impact on the landscape and possible noise from rotating blades.

Mr Jonker says a big concern for neighbours at Mr Stuart is being able to see turbines from their houses.

The company's policy with all developments is to establish community consultation committees to discuss issues and concerns and try to reach a consensus, he says.

Last year, the company advertised for expressions of interest from farmers in Otago and Southland willing to have turbines on their land. More than 70 farmers responded, a number Mr Jonker says was surprising.

"The positiveness of that exercise was unexpected".

Nineteen sites have been selected as having potential for turbines. Wind monitoring masts will be erected and two years of data gathered before it is decided whether or not turbines are feasible.

Mr Jonker says turbines are "always going to be in someone's back yard", but he gets the feeling New Zealanders would rather have a wind turbine than a nuclear or coal-fired power station.

"People tell me a few turbines are not that bad and they can probably live with them."

But several other factors played a part too, most critically, the site of the proposed development and a lack of trust of corporate developers.

They found people did not oppose developments because of the NIMBY - not in my back yard - syndrome. There was no consistent relationship between proximity to a proposed development and the level of opposition.

More than 1050 submissions were lodged in the Project Hayes proposal, of which only 20 were from people living within 20km of the site on the Lammermoor Range.

Dr Stephenson and Ms Ioannou had some sage advice on how to achieve greater social acceptance of wind farms and other renewable energy generation projects.

Members of the public were more likely to give support, or not oppose a project, if they. -

• Had more knowledge and familiarity with the technology being proposed.
• Felt the proposal did not have significant negative impacts on them.
• Felt developers listened to their concerns and responded to them respectfully and honestly.
• Agreed with the scale of the proposal.
• Could see tangible links from the proposal to themselves and their community.
• Felt they were contributors to the transition from old-style energy generation to renewable generation rather than on-lookers.

There did not appear to be an arena in which the public could discuss wider renewable energy generation issues, the women said.

"The market-led approach to energy developments mean that as far as the public is concerned, privately-owned energy generation companies and state owned enterprises lead the process and they can only respond on a case-by-case basis.

"This inevitably leads to a sense of siege, with groups perceiving themselves to be in David-and-Goliath situations and developers seeing oppositional groups as out to get them.

"We conclude there would be huge advantages in ... engaging the public in discussion and debate and the development of policy.