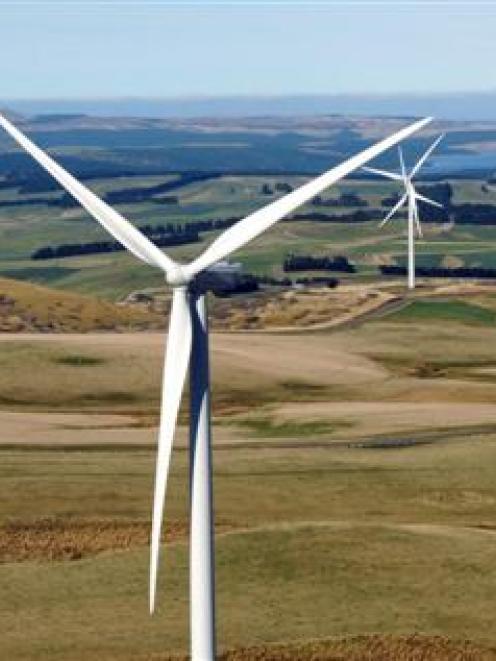 The turbines turn at TrustPower's Mahinerangi wind farm, in the hills about 70km west of Dunedin. TrustPower's Mahinerangi hydro storage lake can be seen in the distance, to the south of the turbines. Photo by Stephen Jaquiery.
Lee Stream farmer Peter Doherty still considers the wind turbines he can see from his farm gate "a blot on the landscape".

But he concedes that after having TrustPower's Mahinerangi wind farm as a neighbour for a little more than a year the 12 turbines are "growing on him" a little.

"They are still not appealing, but I don't take as much notice of them now."

Other neighbours are not quite as forgiving. Robert Reid says the turbines annoy him every time he looks at them, and that is every day unless he is off his farm.

Asked what goes through his mind when he sees them, he replied: "How could anybody be so bloody stupid to put that in our landscape?"

Although small, the wind farm, which lies to the north of TrustPower's Mahinerangi hydro storage lake, is Otago's largest. The last of its turbines were commissioned in April last year and in the 12 months since, it quietly worked away, generating 111GWh of electricity - enough to power about 13,700 average homes.

The wind farm got off to a promising start, producing 9% more electricity than expected in the first eight months of operation. But reduced wind speeds in the first few months of this year brought generation over a full year back to 5.7% above expectations, TrustPower community relations manager Graeme Purches said.

At the time the wind farm was being proposed, TrustPower said it was attracted to the Mahinerangi site because of steady winds experienced in the area.

Since its commissioning, the total average availability of wind for the wind farm had been 98.31%, he said. While the turbines began generating when wind speeds reached 4 metres per second (m/sec) the ideal wind speed was 9 m/sec. The average wind speed for the first 12 months was 9.33 m/sec.

The best month for winds was July last year, when the average wind speed was average 11.9 m/sec. During that month, 15GWh was produced, Mr Purches said.

"This year we have seen 20% lower wind speeds in April compared to the same month last year, and 7% lower winds in May."

One turbine was out of production in May. Mr Purches said Vesta, the company which supplied the turbines, identified an issue with parts in overseas turbines which it believed might lead to a reliability risk.

"Out of our 12 turbines, only two were identified to have any risk based on serial numbers of turbines and batch numbers of parts used in each turbine, and ... Unit 8, it was shut down as a precaution."

The four red aviation hazard lights which wink throughout the night remain one of the main irritations for neighbours.

Mr Reid, fellow Lee Stream farmer Lindsay Brown, and another person who did not want to be named, all said they had been assured at the Environment Court hearing that the lights would be shielded and would not be able to be seen from the ground, but that was not correct.

Mr Reid said he understood the local consultation committee established when the wind farm was first proposed had raised the issue with TrustPower.

Reflections from the turbine blades, particularly when the sun was low, and the constant movement of the blades were also concerns. 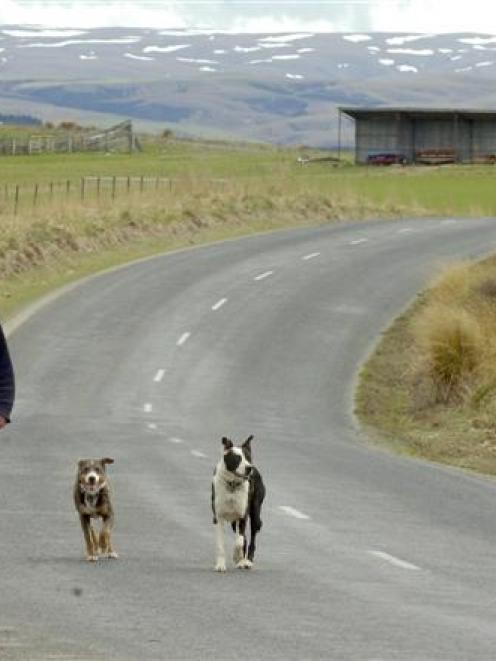 Mahinerangi farmer and wind farm objector Peter Doherty walks on Lee Flat Rd beside his farm. More than 12 months on, he takes a more relaxed view of the neighbouring wind farm. Photo by Craig Baxter.
Mr Brown said the turbines could be seen from "everywhere".

"I think you can see them from the bloody moon".

Because of their visual impact, Mr Brown suggested the resource consent requirements should be different for wind farm developments.

"We're not talking about the impact of a line of trees on a hilltop or the colour of a house roof. The impact of wind farms is a quantum leap away from that."

Based on TrustPower's figures, the wind farm had produced at 30% capacity over the first year, Mr Reid said.

"It makes a mockery of wind farms being such an efficient way to generate electricity.

"What's the use of having something that is only 30% efficient?"

TrustPower has consent for a further 88 2MW turbines or 66 larger 3MW turbines at Mahinerangi.

Mr Doherty said while he had "just about got used to" 12 turbines, he did not want to think about what a wind farm of 80 to 100 turbines would be like.

2010: TrustPower announces 12 3MW turbines from Denmark will be installed in stage one. Total value of stage one $75 million.

Construction begins in September with formation of roads and turbine foundations.

2011: Tower and turbine components arrive at Port Chalmers by ship and are trucked to Mahinerangi. The first two turbines begin generating in February and by April, all 12 are operating. TrustPower says future expansion of the wind farm is on hold, pending decision on who will pay for the upgrade of the Cook Strait electricity cable.