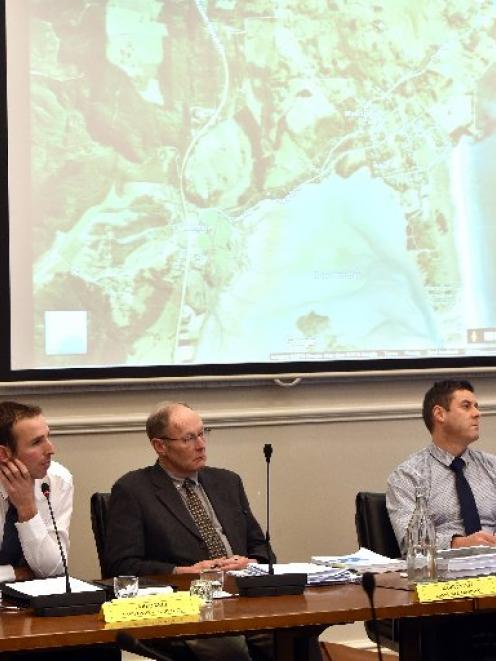 Dunedin City Council environmental health officer Carlo Bell (left), landscape architect Barry Knox and planner Darryl Sycamore have sat through three days of hearings. PHOTO: GREGOR RICHARDSON
The fate of a wind farm proposed for the edge of Dunedin remains in the balance after a ‘‘challenging'' three days of submissions.

The gulf between those for and against the $5 million to $6 million proposal to build three wind turbines on Porteous Hill was once again highlighted at the third day of the resource consent hearing yesterday.

The turbines described by some submitters as an eyesore were ‘‘beautiful kinetic sculptures'' to another.

The trust behind the proposal was hailed for its ‘‘exemplary'' consultation with the community by those in favour, while a submitter against accused them of being a ‘‘cultish'' special-interest group, incapable of listening to opposing viewpoints.

All the landscape architects were highly qualified, gave compelling evidence, but came up with different answers about the impact the turbines would have on the landscape.

He ‘‘narrowly'' favoured the view wind turbines would contribute positively to the environment, but accepted commissioner Colin Weatherall was in a ‘‘difficult situation'' when it came to weighing up the alternative views.

The hearing will go in to its fourth day after council planner Darryl Sycamore requested more time to make a recommendation on whether consent should be granted.

Warrington resident Geraldine Tait was a founding trustee of Blueskin Resilient Communities Trust, but resigned, along with another trustee, because of concerns about the direction it was taking and its tendency towards ‘‘empire building''.

She accused the trust of being a ‘‘cultish'' special-interest group, incapable of listening to alternative viewpoints.

A report from Polson Higgs raised doubt about the project, but the trust, under the leadership of manager Scott Willis, pursued the project ‘‘well beyond its logical end''.

Green Party MP Gareth Hughes spoke over video-link, which he said saved 176kg of carbon emissions over flying to Dunedin from Wellington, saying he supported the proposal.

Despite being a small wind farm it would have a ‘‘cumulative'' benefit in helping New Zealand meet its climate change obligations, Mr Hughes said.

The ‘‘bigger picture'' wasthe precedent it set for future community-owned renewable energy projects, which were popular in Europe and could become ‘‘the way forward''for New Zealand.

Waitati resident Antony Deaker was fully supportive of the wind farm and the proposal to use profits for community initiatives.

The turbines would be ‘‘beautiful kinetic sculptures'' on the Blueskin Bay skyline, which would help mitigate climate change, Mr Deaker said.

He had no problem with the level of consultation, saying BCRT had kept the community informed of the shifting nature of the proposal, which had changed in response to political, regulatory and financial constraints.

In another example of experts having contrasting views, Waitati ornithologist Derek Onley said the trust had taken an ‘‘abysmal approach to the ecological assessment''.

Rather than relying on desktop study, the applicants should get someone to go out to the site and carry out an assessment.

‘‘Find out if falcons nest on the hill, rather than declaring from Auckland that they don't.''

Brenda Thom, who helped her brother John Thom submit, said the boundary of his farm was 300m from the proposed turbines.

The turbines going up would destroy his dream of building a house to retire in on a part of the farm close to the proposed wind farm site, she said.

He bought in the area to ‘‘enjoy its natural beauty'' and would not have done so had the turbines been up.

Blueskin Bay resident and Waikouaiti Coast Community board member Alasdair Morrison pleaded for resource consent for the ‘‘political vanity project'' to be declined.

‘‘If we cut through the flowery rhetoric, this application is essentially a somewhat political vanity project about someone wanting to erect three very large inappropriate structures in an inappropriate place.''