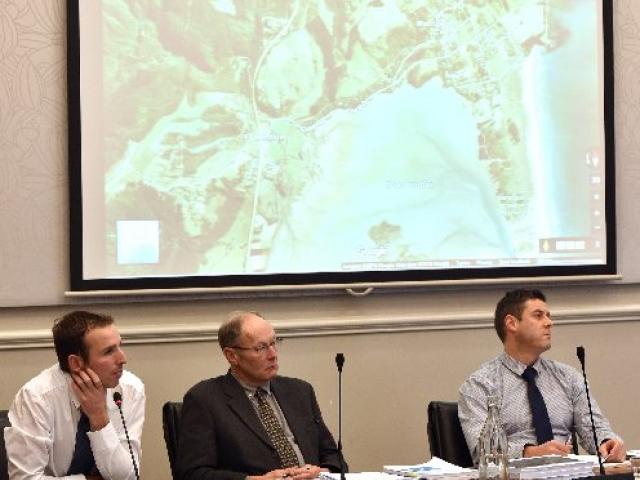 The fate of a wind farm proposed for the edge of Dunedin remains in the balance after a ‘‘challenging'' three days of submissions.

The Dunedin City Council is "open to the idea" of buying electricity from a community group planning to erect a $5 million windmill cluster in Blueskin Bay, and is investigating if such a move would be viable.

Lee Stream farmer Peter Doherty still considers the wind turbines he can see from his farm gate "a blot on the landscape".

A Dunedin couple's plans to build a hot pools and accommodation complex in Queensberry have been put to one side, in favour of a wind farm that could have 100 turbines.

The trust hoping to erect a cluster of wind turbines to provide electricity to Blueskin Bay area residents is about to begin the next phase - engaging with the community.

Further monitoring will be carried out on the Kakanui Mountains to help establish the feasibility of a wind farm being investigated by Waitaki Wind Ltd.

Work on the Mt Stuart wind farm between Milton and Waitahuna is progressing well as foundations are being prepared and base rings placed in position. The rings will be embedded in the concrete to form the base upon which each tower will be bolted.

By year-end, wind turbines in Otago and Southland will be producing enough electricity to power an estimated 36,000 homes, and developments which would increase production 11-fold are on the drawing board.

It was a great idea: erect a wind turbine or two and generate enough energyto power the entire Waitati-Blueskin community.
Claimed delays over a further Environment Court hearing involving the proposed Project Hayes wind farm on the Lammermoor Range in Central Otago were highlighted at an Otago Regional Council meeting on Wednesday.

Much of Central Otago's high country has been reclassified in the district plan as being an outstanding natural landscape, which may add more hurdles for developments such as wind farms to gain resource consent.

Windflow Technology, the manufacturer of 500 kilowatt (kW) two-blade wind turbines, has just launched a renounceable rights issued aimed at raising about $5.4 million to fund growth. The company...
Meridian Energy has joined forces with an Australian generation company to build a wind farm in Victoria that will be the biggest in the southern hemisphere if Project Hayes does not proceed.

The Environment Court decision on the Project Hayes wind farm had set a new test for any major project, one that was unprecedented, impractical and perverse, Meridian Energy counsel Hugh Rennie told the appeal hearing in the High Court at Dunedin yesterday.

Construction of stage one of the Mahinerangi wind farm will begin in September, with the first power expected to be produced in February, TrustPower announced yesterday.
The Mt Stuart wind farm could be producing power within the next 10 to 15 months, but first the company behind the South Otago site needs to secure some wind turbines.

The group hoping to put wind power into the houses around Blueskin Bay is looking for a joint-venture partner.