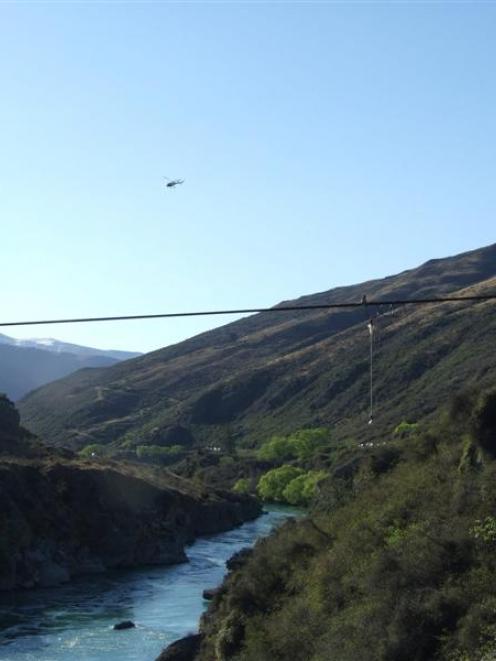 Kawarau Gorge - now classified as an 'outstanding natural feature'
Much of Central Otago's high country has been reclassified in the district plan as being an outstanding natural landscape, which may add more hurdles for developments such as wind farms to gain resource consent.

The Central Otago District Council has changed the way it classifies landscapes, as part of 23 changes to its district plan, affecting only the rural area.

It spent six weeks last year hearing submissions on the changes and announced its decisions this week. Submitters have 30 days in which to appeal those decisions to the Environment Court.

More than two-thirds of the 289 submissions received were about how the council identified and classified landscapes.

The council included a comment in its district plan changes about outstanding natural landscapes and features needing protection from inappropriate development, use and subdivision.

It listed the establishment of wind farms and transmission lines, telecommunications and other structures on skylines among the activities "that could potentially have an adverse impact on landscape values".

Council hearing panel chairman John Lane said some of the changes were prompted by the Environment Court decision which cancelled resource consents for Meridian's proposed 176-turbine wind farm on the Lammermoor Range.

"Obviously, we had to take cognisance of the Environment Court decision, in which they described the Lammermoors as an outstanding natural landscape, of national significance."

Consents for the wind farm were granted by the council and Otago Regional Council in 2007, but the Environment Court, after hearing an appeal against those decisions, ruled the adverse effects of the proposed wind farm on the landscape outweighed its potential economic benefits.

The matter is still before the court. Meridian and the two councils appealed that decision to the High Court, which upheld the appeal after a hearing last year.

The case was sent back to the Environment Court to be reconsidered, with the court directed to hear more evidence on alternative locations for the wind farm.

Further evidence on those locations has to be lodged with the Environment Court by the end of January next year.

In its changes to the Central Otago district plan, the council has included extra areas as being outstanding, or nationally significant, landscapes.

They include the Lammermoor and Lammerlaw Ranges, the Rock and Pillar range, the Lindis area, the Rough Ridge and North Rough Ridges and the Old Man ranges above Roxburgh and Dumbarton.

"Essentially, we've run a contour line around it, where practicable, and the highest country features in the outstanding landscape category," Mr Lane said.

Mr Lane said there was no ban on developments such as wind farms on that land.

"They would require resource consents, as they do now, but, it's fair to say, they would have bigger hurdles to get across, to get the appropriate consents." Under the changes, existing rural production in outstanding natural landscape areas has existing use rights.

New buildings, structures, roading, forestry or subdivision on that land are non-complying activities so resource consent would be needed, to allow the impact on the landscape to be assessed.

The council has decided on a three-tiered approach, with categories being outstanding natural landscapes, significant amenity landscapes and other rural landscapes. The first category has the greatest protection against development.

In submissions last year against the change, Contact Energy objected to the reference to wind farms and transmission lines as potentially having an adverse effect on the landscape.

Pioneer Generation also objected to the comment, saying it unnecessarily drew attention to those types of structures.

TrustPower opposed all 23 changes, saying they could affect the company maintaining and enhancing efficient electricity generation. The inclusion of wind farms in the statement was "emotive" and prevented proper consideration of the visual effects of wind farms at the time an application was made, it said.