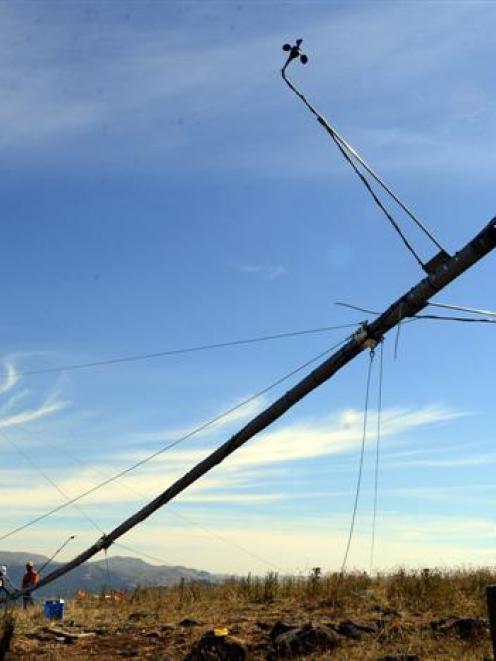 Staff from wind energy consultancy Energy 3 and Pioneer Generation install a 30m wind testing tower on Porteous Hill, north of Dunedin, the site for a proposed cluster of wind turbines that would generate enough energy to power Waitati. Photo by Peter McIntosh.
The next significant matter in developing a proposed wind farm project for Blueskin Bay was ''raised'' yesterday.

The 30m wind testing tower was raised on Porteous Hill yesterday on a near windless day.

Blueskin Resilient Communities Trust manager Scott Willis said the tower was loaned to the trust by TrustPower and would allow the trust to carry out more precise testing at its proposed wind turbine site, which would be important for sourcing funding for the project.

Use of the tower was arranged by renewable energy consultancy company Garrad Hassan's Wellington office, the tower's owner, Transpower, allowing the group to use it free of charge, Mr Willis said. A grant from climate change action group Hikurangi Foundation and $9000 obtained from crowd-sourcing helped pay for specialised equipment to be attached to the tower, installing the tower and other costs related to using it.

The data collected from the tower would provide more certainty to potential investors and information that would aid the resource consent process, which was the next step to be taken, Mr Willis said. The trust plans to erect up to four turbines on Porteous Hill, capable of generating 5.2GWh of energy each year, at a cost of about $5 million.

Mr Willis said the success of crowd-sourcing - the practice of soliciting service, idea or financial contributions from a large group of people, usually an online community - was a ''real vote of confidence''. The trust had aimed to raise about $8000 by crowd-sourcing and was pleased people all over the country had put their hand in their pocket to support the project.