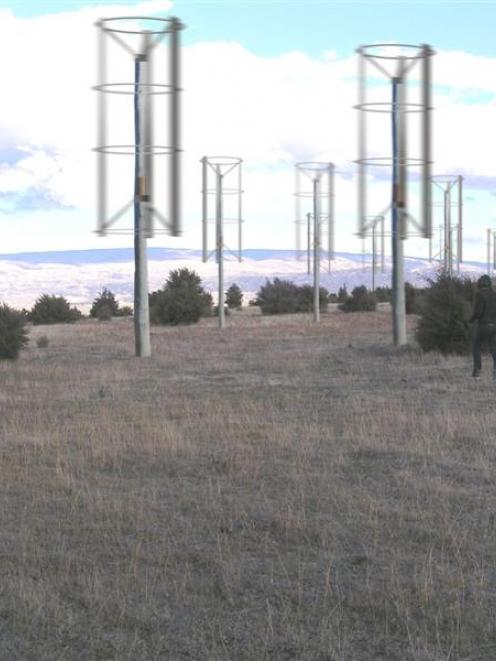 Wind farm plans mooted by a Dunedin couple could see their Queensberry property look like this. Photo by Zeddd Panorama.
A Dunedin couple's plans to build a hot pools and accommodation complex in Queensberry have been put to one side, in favour of a wind farm that could have 100 turbines.

Catherine Mann said they had withdrawn their land use consent application for the complex as the project would require a costly road upgrade but, while researching access alternatives, they had come across information about renewable energy farming which led to the wind farm idea.

"The primary reason has been the likely cost to upgrade the access road. A local engineer has advised Kaituki Ridge Lane would need [to be] widened and taken to a new category of road. This simply makes the project unviable for us.

"We are investigating a ... wind farm and will be trialling two wind turbine designs over the next several months ... The wind turbines should work well in Queensberry, which is known for its strong prevailing winds"

She said she and partner Michael Hodge were aware wind farms could be controversial "due to their visual impact on the landscape and in some cases noise from the turbines" but they intend to use vertical axis turbines, a maximum of 10m high, and "a lot less noisy".

She said the kanuka on their property would remain under the turbines and because of the design, bird life would not be affected.

Eventually, they plan to install up to 100 turbines with a generation capacity of 1 megawatt, which Mr Hodge said had the potential to power between 600 and 800 homes.

Ms Mann said the turbines would only be visible from one public road.

She believed they would be "within the existing permissible building envelope" providing they did not "breach" the skyline and fitted the colour scheme.

That could not be confirmed with the Central Otago District Council yesterday.

Ms Mann said they intended to resubmit a land use application later in the year, after their trials were completed, and hoped to begin this year.

She declined to say how much it might cost.

She said high-tension power lines and infrastructure which could connect the wind farm to the grid already crossed their land.

The couple still hope to build the hot pools complex near the area at a later stage, if they can work out a better access point.

Their land use consent application to the council for the complex received 16 submissions, mostly opposed.