Waterfront hotel: How big would it be? 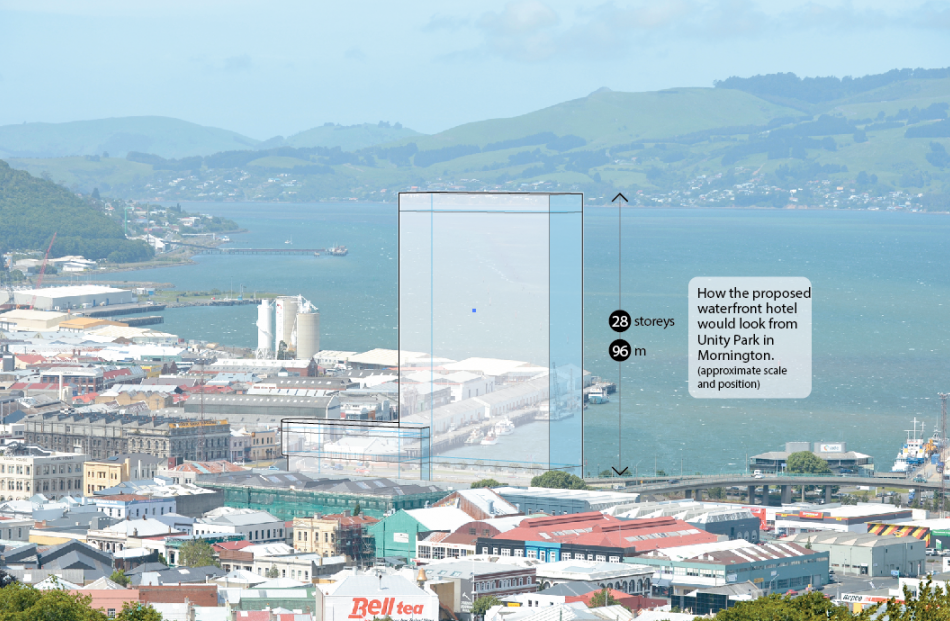 The company bidding to build a 28-storey hotel on Dunedin's waterfront may have to launch a helicopter or a helium balloon to demonstrate how tall it would be.

Betterways Advisory Ltd has applied for resource consent to build the 96m-high apartment and hotel tower on vacant industrial land at 41 Wharf St, prompting a public hearing that adjourned this week without a decision.

The height of the proposed hotel has emerged as a major issue for many submitters, some of whom have also criticised montage images presented to the hearing that purported to show what the hotel would look like from city vantage points.

Yesterday, Cr Colin Weatherall, chairman of the hearings committee weighing the evidence, confirmed a request to physically demonstrate the hotel's height at the site was being considered.

It would be up to Betterways to find a way of fulfilling the request and pay for it, he said.

However, one option was to hover a helicopter above the site, with a steel bar hanging below to indicate the height, he suggested.

Another option could be to launch a helium balloon from the site on a calm day, tethered to the ground by a 96m-long wire rope, he said.

It was ''not unusual'' to make such a request as part of the council's consent process, Cr Weatherall said, but there were differences this time.

''This [hotel] is a different height than most,'' he said.

Whatever method was chosen, committee members would need to be satisfied the height being demonstrated was accurate.

The method would also need to remain in place for several hours, allowing time to view the results from various locations, Cr Weatherall said.

Betterways director Steve Rodgers, asked yesterday how he might comply with such a request, said he was still ''working it out''.

A balloon could be blown off course, making exact heights difficult to achieve, while a hovering helicopter would not give a true impression of the building's bulk or impact on views, he said.

The consent hearing adjourned on Wednesday after seven days of arguments for and against the hotel, but is scheduled to resume on February 18.

Cr Weatherall said Betterways would be notified of any requirement to demonstrate the hotel's height, and any other additional information deemed necessary, prior to the resumption.

Helicopters Otago owner Graeme Gale said when contacted it could cost between $1800 and $3000 per hour to hover over the site, depending on the helicopter used.