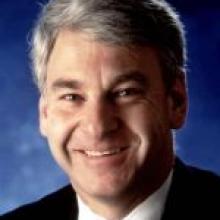 Paul Collins
The chairman of the trust running Wellington's Westpac Stadium is ready for competition with Forsyth Barr Stadium in Dunedin.

Wellington Regional Stadium Trust chairman Paul Collins was responding to comments this week by David Davies, the man tasked with making a success of Dunedin's roofed venue, who this week predicted "aggressive" competition between the venues.

Mr Collins said those behind the Wellington stadium had worked hard to establish the venue's reputation for hosting successful events, and it was "not necessarily" true the venue would lose events to Dunedin.

There had always been competition between New Zealand stadiums, but the upgraded Eden Park in Auckland - with room for 55,000 patrons - would be in a position to target larger-scale events, while Dunedin's stadium would lure crowds seeking an indoor venue, he said.

Mr Collins would neither confirm nor deny Westpac Stadium would cut its margins to compete with new or upgraded venues.

That was despite comments in his trust's draft statement of intent, which said: "We expect to do some events at reduced margins and we must be prepared to meet the market conditions".

Instead, Mr Collins said the ability to sell tickets, and the yield per ticket, would be a key consideration for a promoter or other party considering signing a contract to use a particular stadium.

Ultimately, competition between the venues would come down to how each venue operated, and their ability to establish a successful reputation.

"I think it's what you make of the venue you have got.

"I have got absolutely no doubt Forsyth Barr Stadium will attract a different range of events.

"It's obviously a covered facility and ... that obviously differentiates itself from any other facility in New Zealand.

"It's now how Otago ... capitalises on that and builds on it," he said.

Since the completion of Westpac Stadium in 1999, the number of events staged at the venue had grown from 14 in the first year to at least 40 each year, he said.

A Berl report released earlier this month found the venue had generated $484 million for the Wellington economy, more than double original forecasts.