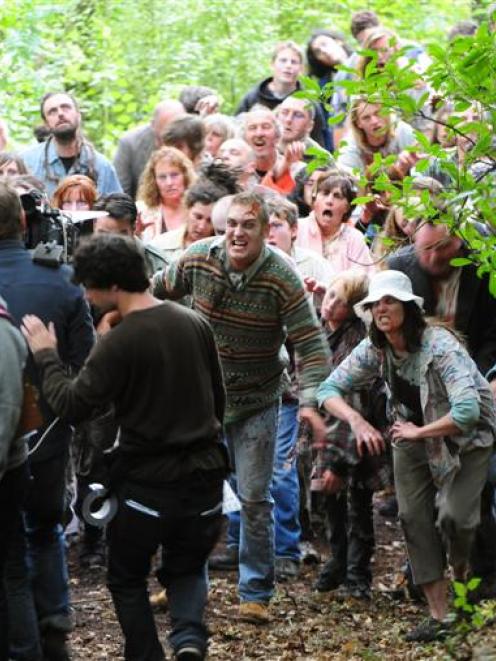 Zombies on the move at Seacliff yesterday during filming of I Survived a Zombie Holocaust. Photo by Craig Baxter.
It could have been a scene out of a horror movie.

And that's exactly what it was.

"Zombies This Way" signs lined the entrance to the former-Seacliff Lunatic Asylum grounds yesterday for the shooting of 38 Pictures feature film I Survived a Zombie Holocaust.

Down in a clearing in the bush, 100 terrifyingly realistic zombies are waiting to attack.

Just as soon as the clapboard comes down and the fake smoke has dissipated.

The lead actors are quietly discussing the scene on a moss-covered rock nearby.

"The cast are dead on their feet," Ben Baker jokes.

"They're the next big thing."

But, the real stars of the show are the 100 zombie extras, who have given up their time to appear in the film.

Production company 38 Pictures held zombie workshops in Dunedin two weeks ago to reveal the inside secrets of looking undead.

"A good groan is essential and it's also handy if you have something physically wrong with you," director Zoe Hobson said.

"But, it's great fun to wear make-up and run around in the forest eating people.

"It's been a great chance for people to be a part of a local project and get out on a film set.

"These guys have been better than any paid extras I've worked with.

"People are taking time off work to be in this."

Local enthusiasm for the project had made the film possible, Ms Hobson said.

"We couldn't have made this without all the people who have jumped in and helped.

"The locals have been absolutely fantastic.

"There's a farmer down the road called Denis O'Connell who brings up his tractor every time we get a vehicle stuck.

"You wouldn't get that in Auckland."

Stewart bought the former-asylum property five weeks ago and has plans to convert it into a wedding and reception centre.

"We only moved into the place 10 days ago, so the timing wasn't great, but we wanted to be part of this," he said.

"It's been really good fun."

"It didn't take much rehearsing. It's just like being out on a Saturday night, really."

The $250,000 film was one of only four, out of a pool of 250, selected for funding by the New Zealand Film Commission's first Escalator project.

The film still has four weeks of shooting left, to take place in South Dunedin, Berwick Forest, the Leviathan Hotel and Naseby, before it goes into postproduction in Dunedin.

Ms Hobson said she hoped to see it released in New Zealand and overseas next year.