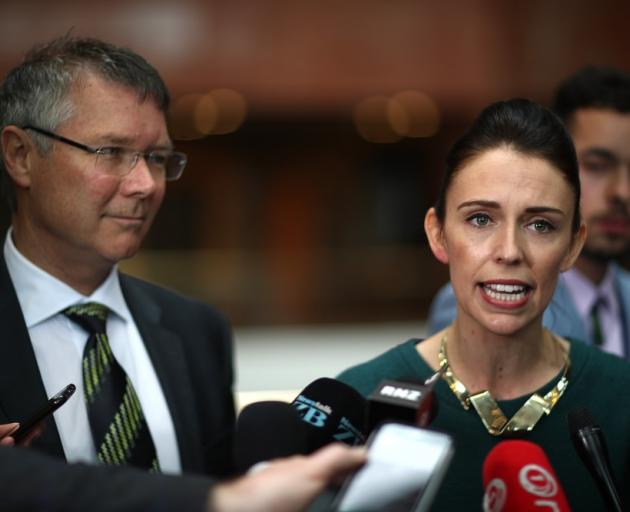 Senior Labour MP David Parker has emerged as a linchpin in the new coalition cabinet, taking the pivotal economic development, environment and trade portfolios that will connect him to key ministers in both the New Zealand First and Green parties.

Despite being formally ranked number 11 in the cabinet announced today by Prime Minister-elect Jacinda Ardern, Mr Parker has emerged as a key confidant of the new Labour leader since she took over from Andrew Little in August, and has a long and cordial relationship with the new Deputy Prime Minister and Foreign Minister, Winston Peters.

By taking the environment portfolio, Mr Parker will also end up working closely with the new Climate Change minister, Greens co-leader James Shaw, and his fellow Green minister outside of cabinet Eugenie Sage, who will become Minister of Conservation and Land Information, the latter covering the Overseas Investment Office with responsibility for vetting foreign land and other investments.

Mr Parker, whose proposal for a levy on commercial water use did not survive the coalition negotiation process, is also Attorney-General and an associate minister of finance.

Ms Ardern confirmed that both Mr Parker and Mr Peters will travel with her to the APEC leaders' summit in Vietnam early next month, her first on the international stage and where New Zealand's desire to renegotiate elements of the controversial Trans-Pacific Partnership agreement represent an early diplomatic challenge.

The coalition agreement announced yesterday included a commitment to spend up to $1 billion a year on regional development initiatives and a plan to plant one billion trees to underpin a new focus on the forestry sector, regional employment, and the creation of carbon 'sinks'.

She signalled that would require a splitting up of the Ministry for Primary Industries, which the previous National Party-led government had created from the old Ministries of Agriculture and Forestry and the Ministry of Fisheries.

While there has been speculation the new government might also seek to break up the Ministry for Business, Innovation and Employment, Ms Ardern said that any plans for changes at the super-ministry had not yet been formulated.

Ms Ardern herself takes a new position as Minister for Child Poverty Reduction, which will have its own unit established in the Department of Prime Minister and cabinet and will devise national indicators to measure progress in reducing current levels of deprivation among children, based on Ms Ardern's own Private Members' Bill from the last Parliament.

Mr Twyford also becomes Minister of Transport, with his responsibilities making him responsible for two of Labour's flagship policy areas: a massive affordable housing construction push and investment in light rail in Auckland.

Leading the new government's policies to strengthen unions' bargaining power and its intention to shrink total migration numbers will be Iain Lees-Galloway, who becomes Minister of Workplace Relations and Safety, along with holding the Immigration portfolio.

Education goes to long-time spokesman in the area, Chris Hipkins, who will also be Leader of the House, assisted by Willie Jackson, who will be a minister outside cabinet serving as Minister of Employment, which includes the tertiary education, skills and employment portfolios.

David Clark becomes Minister of Health, while Carmel Sepuloni picks up Social Development, where Ms Ardern said she would be undertaking a review of the previous government's "social investment approach" to ensure that it was delivering the improvements claimed for it and was consistent with Labour's "beliefs and values".

The former party leader also becomes Minister of Justice, for Courts, and takes responsibility for the government's intelligence agencies, although Mr Ardern retains the Minister for National Security and Intelligence portfolio routinely held by Prime Ministers. She will also take the Arts and Culture portfolio, emulating her former boss and Prime Minister Helen Clark, who leveraged the portfolio to strong political effect.

Megan Woods, who might have expected the climate change portfolio, becomes Minister of Energy and Resources, Research, Science and Innovation, and Minister for the EQC and Greater Christchurch Regeneration.

Mr Peters rounds out his responsibilities by becoming Minister for State-Owned Enterprises, while Mr Nash also takes the Revenue and Police portfolios.

Clare Curran takes on the Broadcasting, Communications and Digital Media portfolio, making her responsible for the telecommunications sector.

The commerce and consumer affairs ministries sit with Labour's Kris Faafoi, outside cabinet, while Customs is also outside cabinet and held by second-term MP Meka Whaitiri.

Peeni Henare, as Minister for the Community and Voluntary Sector and the Whanau Ora health policy and Aupito William Sio as Minister for Pacific Peoples, round out the Ministers outside cabinet.

Each of the three governing parties gains a parliamentary under-secretary.

- By Pattrick Smellie of BusinessDesk