Peters claims he is victim of 'filthy politics' 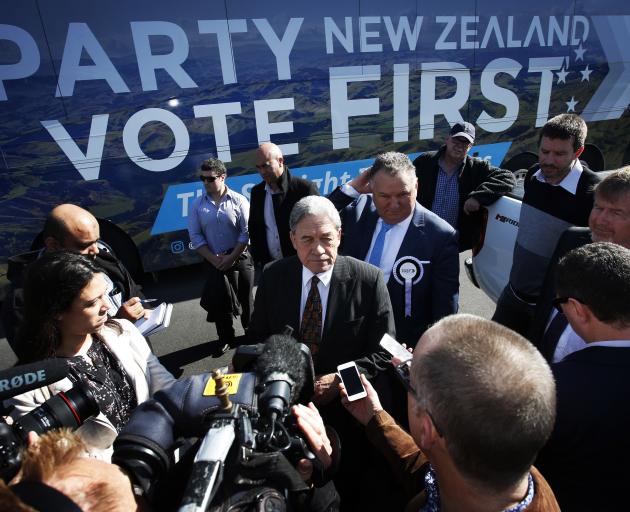 Winston Peters at the Northland Club, Porowini Ave, speaks to media and Northland Forestry representatives. PHOTO: THE NORTHERN ADVOCATE
NZ First leader Winston Peters has claimed he is the victim of "filthy politics'' and is considering his legal options as three investigations began into how his superannuation details were leaked into the public arena.

Mr Peters is pointing his finger at the National Party as the possible "leak'' to the media of the news he had to repay overpayments for his superannuation since 2010, saying it was an attempt to destroy NZ First.

That followed revelations that two ministers - Paula Bennett and Anne Tolley - were briefed on the overpayments by Government department heads under a "no surprises'' policy.

National leader Bill English said he did not believe the leak had come from National and was assured by Ms Bennett and Ms Tolley they had not passed on the information.

Ministerial Services is now looking into the handling of the information by the ministerial offices involved. Both the Ministry of Social Development and Inland Revenue are also investigating to ensure the leak was not by a public servant.

Mr Peters said he would speak to his lawyer about his options and was determined to get to the bottom of the matter so people could have confidence when dealing with government departments.

"There's no way I think the fair-minded people of this country are going to put up with this sort of carry-on when it's deceitful, it's duplicitous, it's all the worst elements of dirty politics.''

However, he did not say the incident would make it difficult to go into a governing arrangement with National after the election, saying he did not put personal interests above national interests and it would be for the voters to decide.

Mr Peters has also signalled he will complain to Privacy Commissioner John Edwards.

State Services Commissioner Peter Hughes defended the decision to inform the ministers, saying it was carefully considered and the solicitor-general consulted.

However, Mr English said the government departments should not have told ministers, given the personal nature of the information.

"There's a question as to whether it was the right judgement by the public service to advise ministers when it involved a senior politician during an election campaign.''

He said the ministers had handled it "with integrity''.

Ms Bennett said she knew the information would be "explosive'' so decided not to share it even with her staff. She denied National had leaked it.

Ms Tolley was first told by MSD chief executive Brendan Boyle on July 31 and got an update from MSD on August 15. Ms Tolley also told the Prime Minister's chief of staff, Wayne Eagleson, who has denied telling anyone else in the office, including Mr English.

The Ministry of Social Development said Brendan Boyle was first advised on June 19 as part of a routine briefing. On July 27 he was advised the matter had been resolved to officials' satisfaction.

Mr Boyle asked the State Services Commission if it should be disclosed to the minister under the "no surprises'' policy and was told to do so. That happened four days later on July 31 at a one-on-one meeting with Ms Tolley. It was followed up with a written note on August 15.

Newshub have reported they got an anonymous tip-off by phone three days later on August 18.

It remains unclear who was at fault for the overpayments - Mr Peters was on the rate for a single person who was sharing accommodation rather than someone living with a partner.

He has said he took his partner Jan Trotman with him when he applied for super in 2010 but neither MSD nor Mr Peters will release his initial application form or reveal how much he had to repay. Mr Peters said they were unable to work out how the error was made.