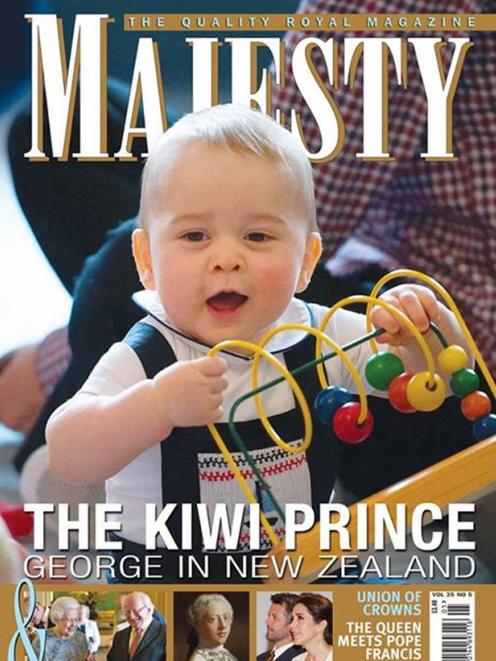 The Majesty magazine cover.
A photograph of Prince George at Plunket's royal play date is the subject of a wrangle over ethics after it was posted on the internet by a British magazine in an apparently altered form.

As shot by freelance photographer Marty Melville, the image of the 8-month-old Prince shows him holding a wooden bead framed toy bearing an inscription that identifies it as belonging to Wellington's Tawa-Linden Plunket Toy Library.

The image has run in numerous publications - both here and around the world - but it's the image on Majesty magazine's cover that has caused outrage.

In Majesty's version of the picture, slated for the cover of its May issue and previewed on the magazine's Facebook page, the image doesn't contain the hand-written inscription "TLPTL T157" and an associated crossing-out in black ink.

Nor is there a caption to say that the image has been digitally altered.

London-based Majesty did not respond to Herald inquiries yesterday.

Melville said, after seeing the Majesty version, that he was in no doubt it was his picture and that the original showed the inscription.

He said digitally altering a news picture and not saying so in a caption was a serious matter. He would raise it with AFP, the news agency for which he covered the visit last Wednesday of George and the Duke and Duchess of Cambridge to a Plunket coffee group with New Zealand children and their parents at Government House in Wellington.

"You can crop, adjust levels [of brightness, contrast and colour-correction], but you cannot add or take away anything that's in the original photograph," Mr Melville said. "Agencies take a very dim view if clients download their photos and then alter them."

Melville couldn't understand why the inscription had to be removed, saying, "It really didn't distract from the photo."

The British Press Complaints Commission's editors' code of practice states, under the heading of "Accuracy": "The press must take care not to publish inaccurate, misleading or distorted information, including pictures."

Several British newspapers featured George on their front pages playing happily with the bead frame, but their pictures either omitted the wooden base plate which carries the inscription or blocked out that section of the image with a smaller one, of Kate cuddling her son.

AFP deputy photo direction for Asia-Pacific Richard Brooks said Mr Melville took the image on a pool basis. That meant it was distributed to about a dozen agencies in New Zealand, Australia and beyond, which are then free to relay it to their own clients. "So Majesty magazine might have received it from any of those sources."

He said AFP did not permit any digital alteration to images in any form, outside the normal, accepted standards of colour adjustment and cropping.

Toy Library Federation president Ester Romp said toy libraries and Plunket were excited to see one of their toys featured with the Prince. She said she was surprised the inscription had been removed from the Majesty picture.

"Kate had asked for a genuine Kiwi experience. Toy libraries and Plunket are part of that. We were very proud to be involved. How the British press use the images doesn't take away from our experience."