Better late than never - mail is on the way 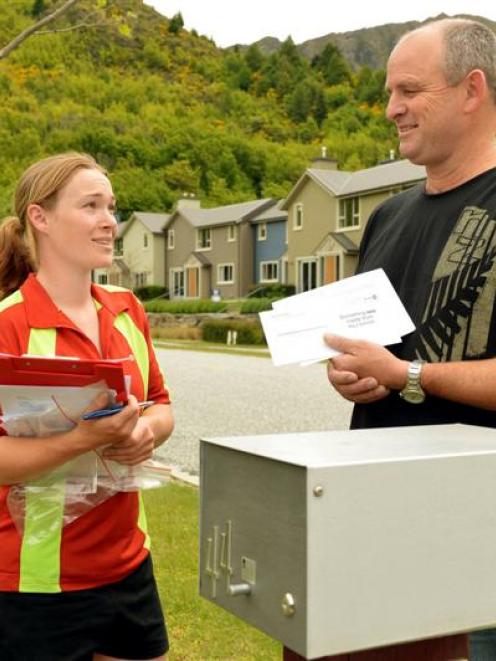 Postie Terri Oakden delivers a letter to Peter Crum, of Arrowtown, yesterday. Photo by Stephen Jaquiery.
The first deliveries of more than 16,000 overdue letters and parcels by New Zealand Post yesterday was a case of better late than never for hundreds of Wakatipu residents.

Police have released 16,611 pieces of mail which were recovered unopened from commercial storage and the home of a 32-year-old former postal worker, who faces criminal charges and has name suppression.

The former postal worker is due to appear in the Queenstown District Court today.

Police still possess "several hundred" items of opened mail which they retained as part of the investigation.

The Otago Daily Times accompanied uniformed and experienced contract postal worker Terri Oakden, of Queenstown, as she made her door-to-door deliveries in Arrowtown yesterday.

Ms Oakden was one of 20 postal workers busy all day delivering mail overdue by up to 18 months. They were assisted by 10 support workers driving vehicles carrying boxes of sorted mail.

The team began to serve most of the 730 addresses in the Queenstown suburb of Fernhill, plus 397 in Lake Hayes Estate and 236 in Arrowtown, which were all notified of the Sunday delivery days a few days earlier by a mail drop.

An official letter from NZ Post apologising for any inconvenience or distress caused by undelivered mail was also given to recipients.

Arrowtown resident Peter Crum answered Ms Oakden's knock on his door. He presented identification for security and signed for the delivery. All recipients had to provide ID and a signature.

Mr Crum said he was "happy to have it" as he had had a feeling mail was not being delivered.

He spoke for many when he said, "I was surprised so much mail went undelivered without being noticed."

NZ Post spokesman Michael Tull, of Wellington, who joined staff on rounds in the Wakatipu basin yesterday, said other recipients felt "a sense of closing an unfortunate chapter and some are relieved they're getting the mail where it belongs".

There was also an anticlimax for some, as undelivered post was found to be bills and junk mail.

If occupants were not at home, postal workers left a card with NZ Post's contact details to arrange another time for delivery, in an operation which is expected to take weeks to complete.

Households which were not reached in time yesterday were notified by a new mail drop their delivery will resume this Sunday.

NZ Post said it would use "all available resources" to locate the intended recipients, including any who no longer lived in Queenstown, Lake Hayes Estate and Arrowtown.

This could be a logistical test for the organisation, especially with mail addresses to Fernhill residents, due to the suburb's status as a virtual dormitory for Queenstown's overseas and seasonal workers.