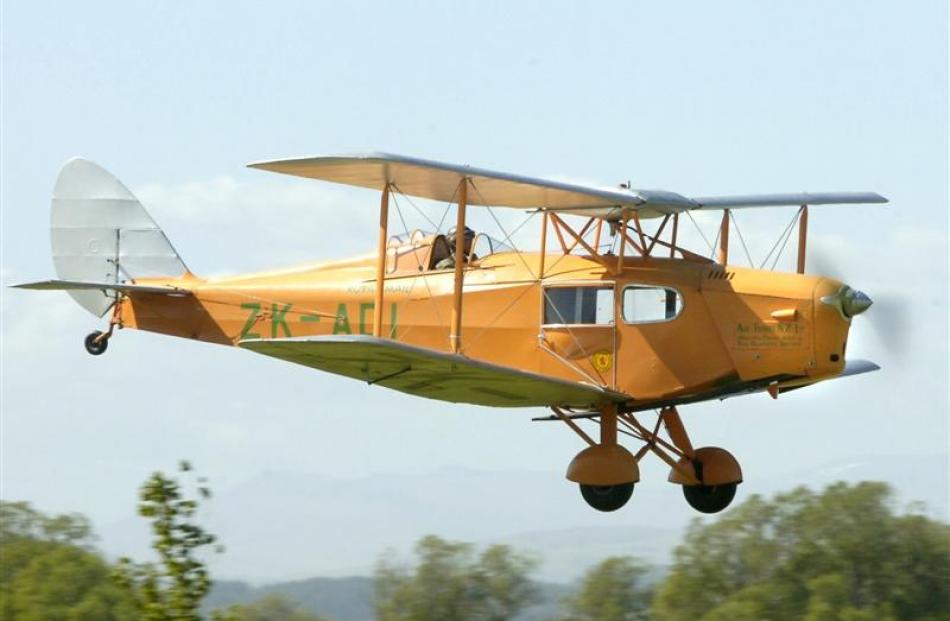 The Fox Moth owned by Colin and Maeva Smith and based at the Mandeville airfield which tomorrow will recreate pilot Will Scotland's historic 1914 flight from Invercargill to Gore. Photo by ODT.

Aviation enthusiasts from all over the country are planning to recreate a historic Southland flight tomorrow.

On February 20, 100 years ago, pilot Will Scotland flew a biplane from Invercargill to Gore, following the main trunk railway line and landing safely at 7.40pm to complete the first successful New Zealand flight between two towns.

Colin Smith, of the Croydon Aircraft Company, at Mandeville, has organised a recreation of Scotland's 40-mile (65km) feat, which was described by newspapers of the day as an ''aerial voyage''.

The orange Fox Moth from the Croydon Aviation Heritage Trust will fly the same route, with Will Scotland's grandniece on board.

It will be accompanied by up to 20 aircraft owned by clubs, commercial operators and individuals.

Many will be Tiger Moths whose owners are bringing them to Mandeville for this weekend's annual Tiger Moth Club of New Zealand convention.

Tomorrow, the fleet of aeroplanes will leave from Mandeville, arrive at Invercargill Airport from 4.30pm and spend about two hours on the ground before flying back to Mandeville.

Mr Smith said Scotland's flight might have been the first flight between towns anywhere in Australasia and was a ''momentous event'' at the time.

''The flight by the Fox Moth is doubly nostalgic because this same aircraft celebrated the 50th anniversary of Will Scotland's pioneering venture by flying over the same [route] 50 years ago.''

The plane also flew the first scheduled commercial passenger service in New Zealand in 1934, from Hokitika to South Westland, he said.

''Air New Zealand can trace its lineage directly back to this aircraft. The Fox Moth is a major part of New Zealand's air transport heritage.''

If winds are too strong, the flight will be made on Saturday.