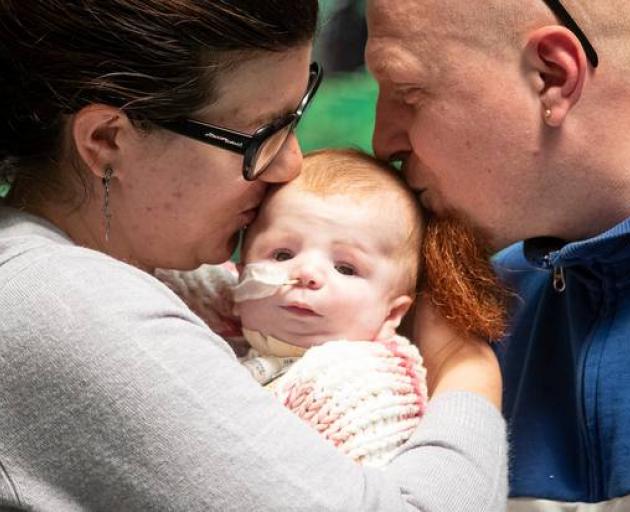 The Russian couple, who moved to New Zealand for a better life, were told their baby daughter Eva has a rare condition which makes it difficult for her to breathe. She also has an undeveloped lower jaw, thumbs and is unable to bend her arms.

Very quickly the family were saddled with $460,000 of medical bills, and no way of paying them.

"This wall went up. You don't believe what's happening. We were in shock. After some time it sunk in and our world collapsed. We didn't know what to think or what to do," Konstantin told the New Zealand Herald while holding back tears.

In March, the couple moved to New Zealand with their unborn baby so Konstantin could study information technology in a bid to create a better life for his family.

"Our plan was that I would finish my studies and then get a work visa and stay here for two or three years, if we like this country then we would stay longer and if not we could move elsewhere," Konstantin said.

Now, all their choices have been ripped away from them.

Baby Eva was born the evening of July 28 in Auckland Hospital. Her doctors noticed she wasn't breathing properly and she was immediately rushed in for surgery before being connected to a ventilator to help her breathe.

It was discovered Eva had a rare genetic disease called Pierre Robin sequence. The syndrome is not a terminal illness and most babies outgrow the severe breathing problems as their airways grow.

For the first month she relied on the ventilator - now she is off the machine but has a feeding and breathing tube.

Konstantin said after a couple of weeks he began to wonder if the medical bills were being covered or if they would have to pay out of their own pocket.

"I asked the doctor and he told me the bills were not covered. International insurance doesn't cover any genetic conditions or birthing services provided by the hospital.

"It all hit me and I couldn't believe it."

In two weeks, Eva is expected to be discharged from hospital with loaned medical equipment, along with a $400,000 bill.

By the time she turns one year old, she will be eligible for a surgery to help open up her airway - but that will be another $60,000.

"We have this huge debt and I don't know how I will pay it because I'm still on a student visa and there's no guarantee I will be able to get a job."

In nine months, the young family will have the option to return home to Russia - as Eva will be well enough to travel the distance - but they say there's no way they could pay off the debt if they did.

A salary is about triple the amount in New Zealand, compared to what it is in Russia."

A Ministry of Health spokeswoman told the Herald New Zealand's approach was to provide treatment to anyone requiring emergency services.

"If they're not eligible for treatment, they can expect to be invoiced for the services they received.

She said visitors coming to New Zealand have health insurance which pay their treatment costs.

"For those who don't, individual DHBs follow up themselves to encourage payment.

"Managing debt arising from unpaid treatment fees for ineligible patients is an operational matter for DHBs."

The couple said they were prepared for the birth not to go to plan but they never expected to have to foot half a million dollars for medical bills.

"We had the money for an emergency caesarean but this, no we never expected this."

Holding Yulia's hand while she looks down at their beautiful newborn, Konstantin translates for his wife: "If my wife stops to think about our debt and what is happening, she feels like she is falling into deep depression."

A Givealittle page has been created to help the family pay off the mountain of debt.

• A genetic condition which means a baby has a smaller than normal jaw and tongue which can lead to difficulty breathing and problems eating early in life.

• It is a rare disease which affects one in 700 babies.

• The syndrome is not a terminal illness and most babies outgrow the severe breathing problems as their airways grow.

Isn't it interesting how sports people are labeled as heroes and when they are injured they get fixed up right away whereas ordinary people have to languish on waiting lists oftentimes up to years, then migrants such as this young couple who come here for a better life get hit straight away with a half a mil debt.
How fair is that?.