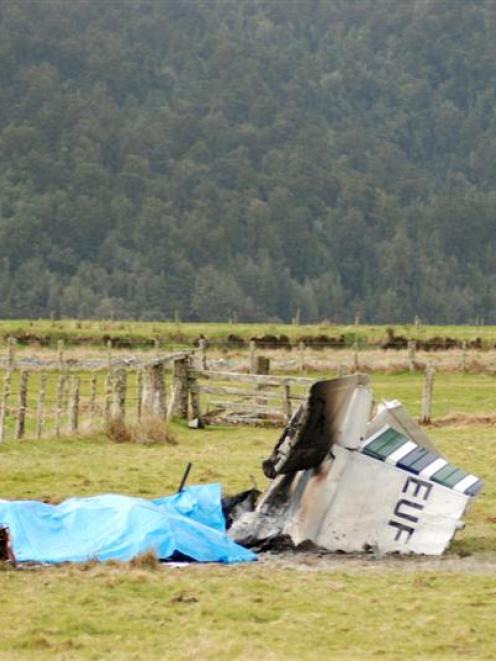 The scene of the fatal crash. Credit:NZPA / Hokitika Guardian, Janna Sherman
The pilot of a plane which crashed in the town of Fox Glacier on the West Coast, killing nine people in September, tried to manoeuvre out of a dive before the left wing dropped and the plane hit the ground, witnesses say.

The Transport Accident Investigation Commission (TAIC) released an interim report today on the September 4 crash which was the worst air disaster in New Zealand in 17 years.

Investigators estimated that the plane was off-balance and overweight when it crashed.

Witnesses said the plane was nearly vertical when it hit the ground. A fine mist or vapour shrouded the plane on impact moments before intense flames erupted.

The nature of the fire meant no one was able to get close enough to the plane to help those inside.

Five men, including the pilot, from Fox Glacier along with four overseas tourists died when the Fletcher fixed wing plane, on a skydiving flight, crashed at the end of the runway at Fox Glacier Airport at 1.15pm.

The interim report identifies further lines of inquiry which are to be looked at by the full report -- which could be up to two years away.

* a possible malfunction or problem with the plane;

* the fitting of the Walter engine to the FU24 type aircraft;

* the conversion of the plane for parachuting operations (the plane used to be a cropduster);

* gaps or deficiencies in the regulations which cover parachuting operations.

The commission expanded on a few of these points in the interim report.

The plane was estimated to have been five kilograms above the maximum certified weight of 2203kg.

Its centre of gravity was estimated as three quarters of a metre rear of where it should have been. The flight manual did not have clear information for centre of gravity for loading parachutists through the cabin.

Following urgent recommendations from TAIC in the week after the crash, the Civil Aviation Authority (CAA) ordered skydive operators to limit the number of people in the main cabin to six.

The commission found that more than six passengers could disrupt the centre of gravity which could lead to control difficulties. It also advised that passengers should be restrained in the front of the cabin.

TAIC also recommended that the flight manual include more accurate determinations of the centre of gravity.

None of the parachutists on board was restrained.

The role of restraints was previously been looked at by TAIC and recommendations made to the CAA calling for a study on the issue. The CAA in 2003 advised not to require restraints for smaller aircraft carrying fewer than 10 parachutists.

There was no traffic control or radar coverage of the plane when it crashed.