Royals turn on charm in Waikato 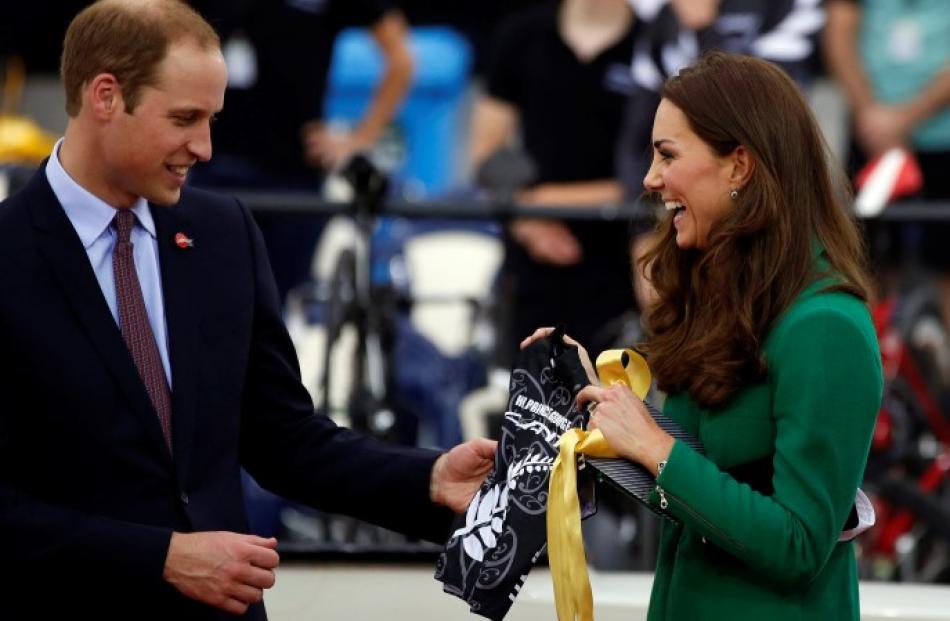 The royal couple share a laugh after being presented with a cycling jersey for their son, Prince George, during a visit to open the new National Cycling Centre of Excellence, also known as the Avantidrome, in Cambridge. REUTERS/Phil Noble

An emerald Duchess and her dashing husband turned on the glamour in Waikato today.

A full day of events in the region meant thousands from all over the North Island were able to catch a glimpse of the happy couple.

A stylish looking Catherine, dressed in a green Erdem coat with a Suzannah dress underneath, chatted with children at Hamilton's Rainbow Place hospice, while her husband charmed aviation enthusiasts at Pacific Aerospace, south of Hamilton.

The events were the first the Duke and Duchess had attended solo on their New Zealand visit.

For little Lee Thompson, the highlight of Catherine's visit to the hospice was finding out whether royalty - like everyone else - were required to eat all their vegetables.

The answer: "Yes I do. I have to eat all my vegetables and so does George," Catherine said.

The duo then reunited for a visit to the town of Cambridge, where decorations were out in full force.

An estimated 10,000 people turned out to welcome the pair, who laid flowers at the town's war memorial.

Members of the crowd who had been waiting up to eight hours were thrilled when the couple came over to greet them.

New Plymouth photographer Helen Joy had made the journey across the North Island for today, and was one of the lucky ones to shake hands with the Duchess.

"The focus is really on Cambridge today and I think it will last the weekend."

For their final stop in Waikato, the couple attended the opening of the National Cycling Centre of Excellence in Cambridge.

To wrap up the opening, founder of Avanti John Struthers gave the couple a tiny bike and matching helmet for Prince George.

They were also given a miniature black and white cycling shirt for their son, emblazoned with the silver fern.

Other presents gifted to the royal couple for George today, included a onesie embroidered with the little prince's name by Hamish Taylor, 17, who is diagnosed with cerebral palsy, and a pint-sized Waikato Chiefs jersey and rugby ball.

- APNZ, Herald on Sunday and agencies