Shrek: From Tarras to Te Papa 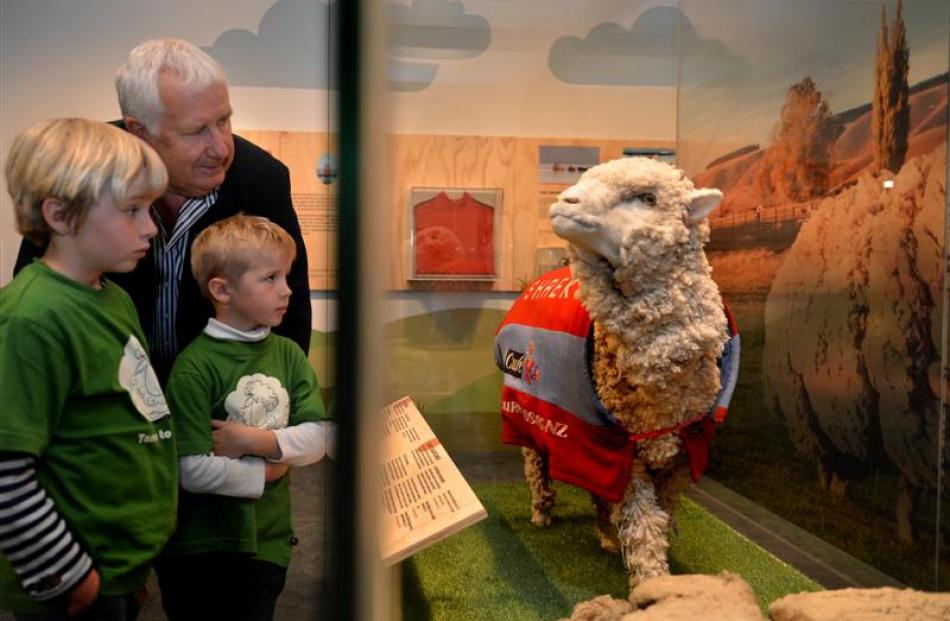 Johim Perriam looks at the Shrek mount in Te Papa with his grand-children Ollie (7) and Max (5). Photos by Stephen Jaquiery. 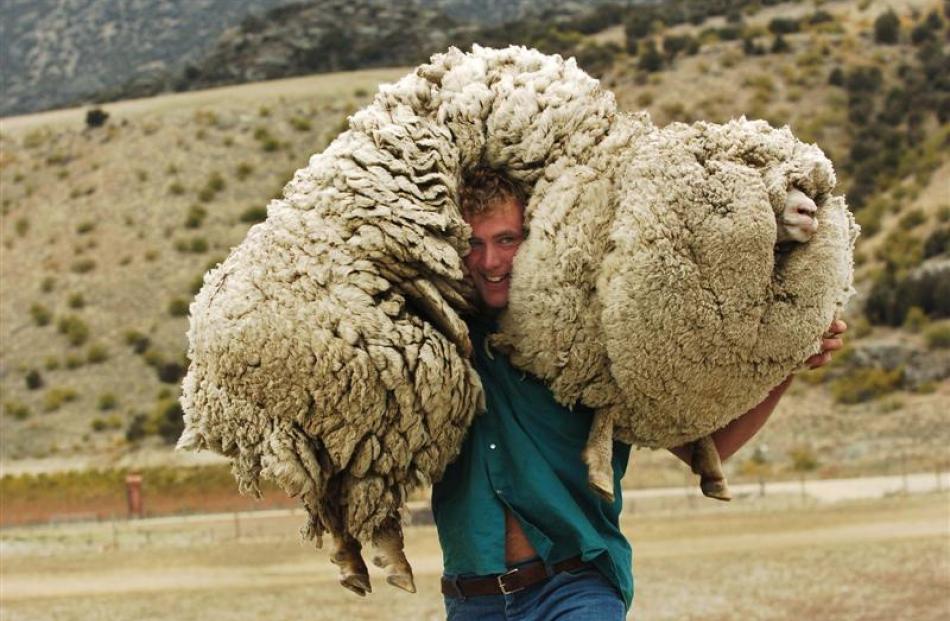 Daniel (Cage Fighter) Devine, a musterer on Bendigo Station in Central Otago, hoists Shrek, the hermit merino wether, which lived for six years in the mountains avoiding being shorn.

Shrek stands beside his shorn fleece 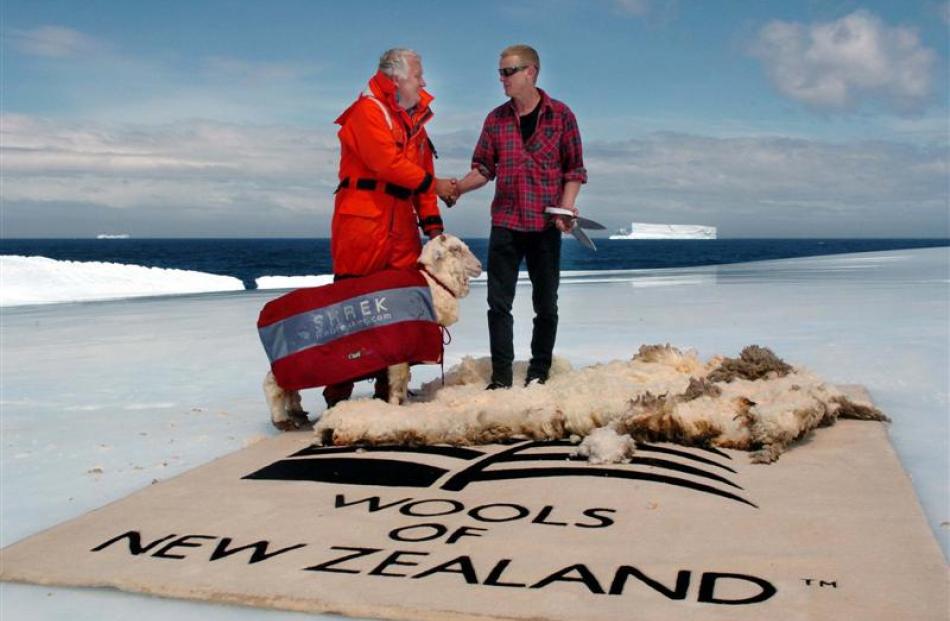 Shrek on an Otago coast in November 2006. 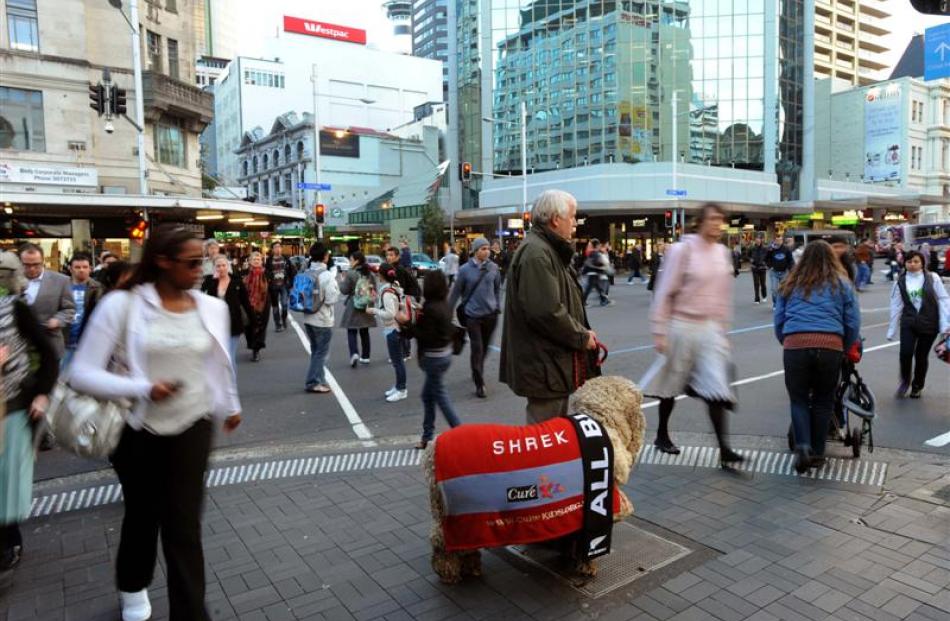 The ordinary was recognised as extraordinary in Wellington yesterday.

The mounted remains of Shrek, the renegade merino sheep from Central Otago, were blessed and unveiled at the national museum, Te Papa.

Speaking at the function, John Perriam, Bendigo Station owner, talked about the incredible journey which started with ''an almost worthless sheep''.

Mr Perriam credited the ''incredible'' photograph of Shrek, draped over the shoulders of musterer Daniel (Cage Fighter) Devine and published on the front page of the Otago Daily Times in 2004, for the success of Shrek.

''Without that and the story, he wouldn't have gone anywhere,'' he said.

Shrek was born on Bendigo Station at Tarras, his parentage unrecorded.

With the rest of the flock he was tailed, castrated and moved on to the high summer tussock run land, boasting views of both Lake Dunstan and the Upper Clutha Basin.

Here he managed to avoid muster for five scorching summers and an equal number of harsh winters.

Shrek was suffering from wool blindness and weighed down by a massive fleece.

It was only through the compassion of musterer the late Ann Scanlan, who discovered this ''massive woolly'', that he was not consigned to dog food there and then.

Transported back to the homestead, squashed into the back seat of a ute, he was dubbed Shrek by visiting teens attending a pony club event because he reminded them of the movie ogre popular at the time.

But it was not until the next Monday that his story really began.

The ODT's front-page photograph was picked up by newspapers around the country and, via the Reuters agency, around the globe.

He was an instant sensation with the animal-loving world.

TV current affairs host, the late Paul Holmes, cemented Shrek's celebrity launch by broadcasting the shearing of his then world-record 27kg fleece to a claimed world-wide audience of 1.2billion viewers.

With the fleece gone, Shrek, now weighing 19kg, shunned other sheep and preferred the company of people, especially children.

Shrek became a fundraiser for Cure Kids, a charity supporting research into life-threatening childhood diseases and, because of that, Dreamworks allowed him to retain his name.

With his cellphone routinely ringing with requests from local and international media, Mr Perriam, the man who proudly describes himself as ''the father of Shrek'', formed a bond with the sheep.

Shrek seemed to trust him and followed him like a loyal child.

Mr Perriam and Shrek started on the publicity circuit.

International film crews were fitted in around A&P shows, a visit to Parliament, rest-homes and the corporate circuit where, at $20,000 per appearance, he commanded a better fee than the All Blacks.

The event was as unlikely as Shrek's first rise to stardom - the woolly wether was shorn 100km offshore on an iceberg which was floating past Otago's coast.

This launched him on to the world stage once more and the money kept rolling in.

During this time, Tarras School published a bestselling book on Shrek, which not only cemented the school's immediate financial future but continues to sell well.

Shrek was shorn for a third time at the top of New Zealand's tallest building, the Sky Tower in Auckland, and by then he was probably also New Zealand's oldest sheep.

At 17, with his health failing, he was put to sleep in his luxury woolshed, his home when back on Bendigo Station.

Mr Perriam said it would be impossible for him to even guess how much Shrek raised for charity, but ''it would easily be six figures''.

Now on display at Te Papa, Shrek and his story, about the wether that won the heart of millions, will survive for future generations.

• Footnote: One of the quiet pleasures of being a newspaper photographer is having a photograph of an ordinary person published in the paper and, in doing so, making that person a star for a day. I may have been responsible for launching this woolly sheep from obscurity, but Shrek has repaid the favour a thousand times over by giving me an enormous amount of pleasure. Sometimes, truth is stranger than fiction.