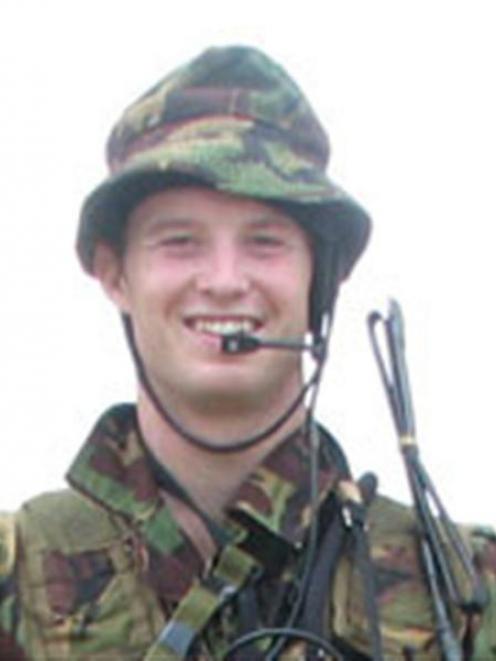 It was attended by members of the New Zealand Provincial Reconstruction Team (PRT), the provincial governor, Habiba Sarabi, and the acting provincial chief of police.

Those at the ceremony wore red poppies in honour of their fallen comrade.

Lt O'Donnell, 28, was killed when his three-vehicle convoy, in which about 12 soldiers were riding, was attacked as they patrolled in the north-east of Bamiyan province yesterday.

The wounded soldiers, Lance Corporal Matthew Ball, 24, and Private Allister Baker, 23, and the interpreter accompanied the casket to Bagram Air Force Base, east of Bamiyan, in a coalition air force C130 Hercules. They have been admitted to Bagram hospital for further treatment.

Earlier today, Prime Minister John Key, who is in Vanuatu for the Pacific Islands Forum, said the Royal New Zealand Air Force might send a 757 aircraft to Afghanistan to bring back the body of soldier Lieutenant Timothy O'Donnell and his two wounded comrades.

Commander Joint Forces Air Vice Marshal Peter Stockwell said there would be a clearer picture by the end of the day as to how Lt O'Donnell would return to New Zealand.

"The New Zealand Defence Force (NZDF) is working with authorities in Afghanistan, and coalition countries to try and bring Tim, Matthew and Allister home as quickly as possible," AVM Stockwell said.

"However, it is a complex task, ensuring the necessary air assets and other requirements are in place to repatriate Tim."

The NZDF will commission a Court of Inquiry into yesterday's attack.

"The Court of Inquiry will consider how the incident took place and the tactics and procedures of the personnel involved in the contact," AVM Stockwell said.

"It will involve talking to members of the patrol as well as a site visit."

The NZDF was unable to say how long it would take.

There are 207 NZDF personnel in Afghanistan, 106 of them serving with the PRT in Bamiyan.

The 16th rotation of the contingent arrived in Afghanistan in April 2010 and will remain in there for about six months.