Teacher yelled at class 'to get out' 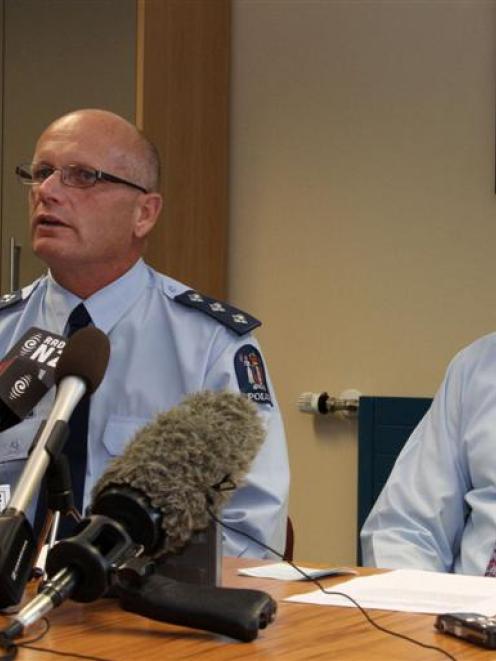 Western Bay of Plenty police commander Inspector Mike Clement (left) and Te Puke High School principal Alan Liddle talk to the media after a teacher was stabbed at the school yesterday.
As blood dripped from stab wounds inflicted by one of his pupils, maths teacher Steve Hose yelled at the rest of his class to get out.

The 53-year-old, a popular teacher and head of Te Puke High School's mathematics department, was about to start class at 11am with his year 9 pupils when one of them, a 13-year-old boy, attacked him with a 10cm kitchen knife.

He was stabbed several times: in the back of his neck and in the shoulder.

"It just happened completely out of the blue," said a girl, who was in the classroom at the time.

"Mr Hose was moving towards the front of the class and there was a lot of blood dripping everywhere ... he [the boy] was following him.

Western Bay of Plenty police area commander Inspector Mike Clement said the boy dropped the knife in the classroom before he left.

He was caught shortly afterwards.

Mr Hose remained conscious as other teachers and pupils came to his aid.

"I think it would be hard to describe it as anything other than a very vicious attack.

"I mean four stab wounds to the neck and shoulder on anybody is vicious," Insp Clement said.

A St John paramedic said Mr Hose had been stabbed once in the back of the neck and twice in the shoulder.

A colleague had attended to his wounds but he was still bleeding heavily when paramedics arrived. The teacher was in pain but was able to speak to officers and tell them what happened.

Insp Clement said the boy, who because of his age cannot be charged with a criminal offence, had been co-operative with police who questioned him yesterday.

The boy, last night in police custody, is to go to a Child, Youth and Family caregiver pending a family conference.

Shocked pupils said Mr Hose, who has been a teacher at the school for eight years, was well-liked and respected.

Te Puke High School principal Alan Liddle said it was the first such incident he had seen in 16 years of teaching in the Western Bay of Plenty.

He said victim support and a traumatic response team from group special education had been in to offer support to the affected pupils and at least seven teachers.

Mr Liddle said it would look at steps to improve the school's security.

"I think as the police are going through the investigation we will be doing our own.

"We need to learn what's happened here and we need to put steps in place."

"It raises the same issues it has raised before and unfortunately as far as I can see there are the same unsatisfactory answers to questions raised the last time there was a stabbing."

• In March last year, Tae Won Chung (17) stabbed teacher David Warren in the back in front of 20 other pupils at Avondale College. He was jailed for 18 months and ordered to pay $10,000 to his victim.

(Source: Ministry of Education and ACC)