Thousands turn out for royal couple in Auckland 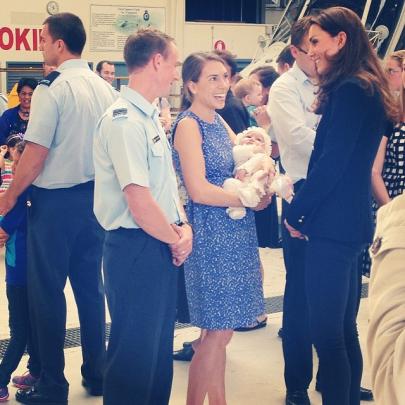 The Duchess of Cambridge meets families at Whenuapai Air Base. Photos Twitter/@GovGeneralNZ 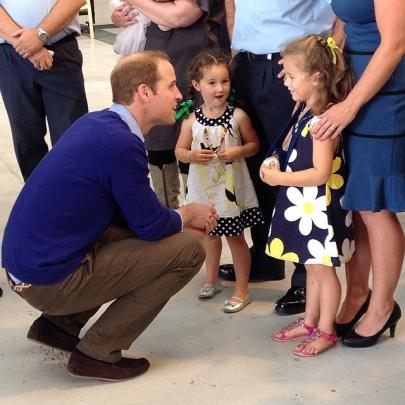 Prince William asks a young girl how she broke her arm. 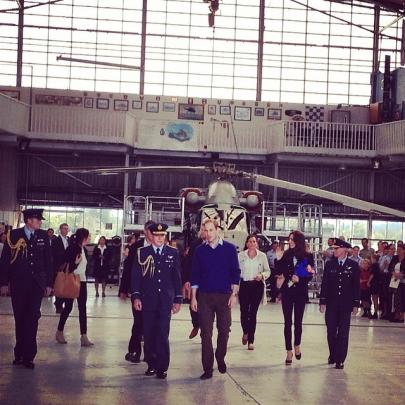 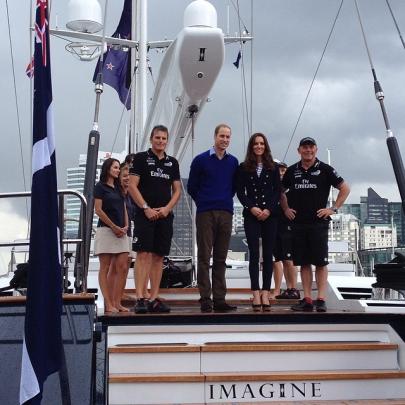 The Duke and Duchess and their match race sailing teams.

Aucklanders turned out in their thousands today to catch a glimpse of glamour royal couple the Duke and Duchess of Cambridge.

And it is Catherine who can claim bragging rights over her husband Prince William, as she left him in her wake during a spectacle race around Waitemata Harbour aboard two Team New Zealand boats.

As the royal couple arrived at the Viaduct Basin, a few heavy showers of rain poured down on the thousands of people lining the dockside.

Some were resplendent in Union Jack coloured clothing and others wore Williams and Catherine face masks.

Aimee Trist had been waiting at the Viaduct for a chance to meet the royal couple since 6.30am.

"I fell forward and she (the Duchess) said 'you're getting squashed'''.

They shook hands and the Duchess said she had a top similar to the one Ms Trist was wearing.

She said it had been worth the wait.

Faye Hayman and Heather Saint said the Duchess of Cambridge spent three or four minutes talking with them.

"She spotted us and made a beeline towards us,'' said Mrs Hayman.

"She hung around and had a full conversation with us. She asked if we were from Auckland, told me my hand was warm, said she had a good flight up here and Heather wished her a good sail.''

The friends are both keen sailors and amateur photographers and picked their spot in the crowd at 7am.

The women said their royal experience was amazing.

"She was very open and a very warm person. She was genuine, and looks at you when she's talking to you,'' said Mrs Saint.

Lily Ferguson wore an English rugby jersey hoping she would stand out in the crowd - and it worked.

"William said 'nice rugby jersey' and asked me where I was from. It was amazing.''

The student from Yorkshire had waited four hours to meet the couple.

But she wasn't the first in line at the waterside; Leeza Chan got up at 3am to mark her spot by the barrier at Karanga Plaza about 4.30am.

Her pre-dawn effort paid off when the Duke and Duchess made a beeline for their most committed fan.

After their walkabout, the royal couple boarded the superyacht Imagine where they changed before the yacht racing.

Catherine raced with Team New Zealand skipper Dean Barker and Prince William with team manager Grant Dalton. Both royals spent lengthy periods at the helm, but it was Catherine who can take home the bragging rights, winning the mini series two nil.

She was gracious in victory: "I am sorry", she said, as she patted her husband's shoulder, back on dry land.

Rawiri Geddes, 21, a member of the Royal New Zealand Yacht Squadron youth training programme, was on Catherine's boat and said it was an honour to be so close to her.

Mr Geddes was a grinder for much of the racing but still managed to get a couple of photos with the Duchess and said she was determined to win.

"She was good, she was really good - she took charge and won both races.''

Mr Geddes, who wore red socks, was on the grinding pedestal during much of the racing but still managed to get a couple of photos with the Duchess.

The Bachelor of Science student said there were celebrations on the boat as they made their way back in to the Viaduct, and Kate came over to the group to talk about their youth programme.

Barker said Kate was very knowledgeable about Team NZ, and had followed the racing in San Francisco. Kate had displayed her competitive side, he added.

"She definitely didn't want to come off the water being behind, I don't think.''

Asked what went wrong, Dalton hinted at conspiracy: "I was just doing what I was told, really''.

He said William was not too distraught at losing, either: "He was pretty happy with that because he was just doing what he was told as well''.

The future king had displayed his skills out on the water, Dalton said.

"He was great, he had a really good feel for it and got off the line nicely in the second race, he was going really well...he was into it.''

However, Team NZ will not be tempted to sign the Duke of Cambridge on as a member.

"I'm not sure we can afford him, he might be a bit expensive. The insurance would definitely be a killer.''

After the excitement of racing, the royal couple headed up to West Park marina on the amphibious Sealegs craft.

The Duchess took the wheel of the Sealegs for at least part of the trip to the marina where people lined the side of the ramp to shore and called out to the couple.

The couple disembarked and spoke to people at the marina.

Prince William shook hands with Boston Newton who is celebrating his seventh birthday .

He said meeting the Prince was the best birthday gift - even better than the BMX he got.

Earlier in the day, the royal couple touched down at Whenuapai, where they met Royal New Zealand Airforce families.

The Duchess wore navy blue jeans and a blue and white striped top under a fitted, military-style navy blazer as she got off the plane with her husband grinning at the small crowd waiting for them.

The royals were greeted by Auckland Mayor Len Brown and his wife Shan Inglis, and Air Commodore Kevin McEvoy.

They chatted happily before heading into the hangar to meet Royal New Zealand Air Force families.

Among them were members of the Orion crew recently returned from the search for the missing Malaysia Airlines jet off the west coast of Australia.

Flight Lieutenant Andrew Fisher, who had three weeks on the Orion, said the Duchess took much interest in his recent role.

"She asked if we had been away recently. She was interested in how we found it. It was intense flying, we flew around 110 hours in three weeks,'' he said.

Maia Hunt, the 6-year-old daughter of Squadron Leader Steve Hunt, presented the Duke with the book The Wheels on the Bus _ a present for his son George.

"He thought it was for him. He said he would do the actions and make all the noises,'' Maia said.

Outside, a crowd of about 100 people lined the road leading up to the airbase gate.

They waved and cheered as the motorcade rolled by, with glimpses of the Duchess prompting squeals and cries of "Oh my God she's beautiful''.

A column of primary-aged Whenuapai School students snaked their way across the entrance, waving handmade New Zealand flags as the royals passed.

Tomorrow the couple will visit Waikato.