Leaders save best for last 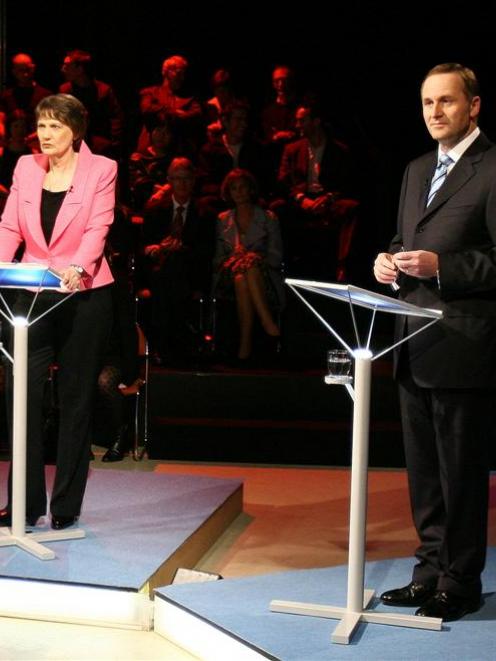 Prime Minister Helen Clark and National Party leader John Key get set for the ONE News Election 08 Leaders Debate in Auckland tonight. Photo by Wayne Drought/NZPA.
Mark Sainsbury tried to sound casual. "Do you believe in God?" he asked.

Helen Clark and John Key didn't seem to have been expecting that one, but they're good politicians and didn't flinch.

"No I don't," Miss Clark said firmly. "I'm on the public record over many years as saying I'm an agnostic. That means nothing is proven."

She said she didn't spend a lot of time agonising over it. "I'm a social democrat, the basic principles of Christianity pretty much dictate how I live my life."

Mr Key said he wasn't a deeply religious person "as I've said before".

He also lived by Christian principles. "But I don't sit there and worship a god every night. I don't believe in life after death."

Miss Clark chipped in for both of them: "None of us really know."

These personal revelations made the third and last TV leaders debate completely different from the raucous first and second encounters - and a lot better value.

TV One's Sainsbury followed up by asking them whether they had broken any laws.

Mr Key said he drove his car on a car-free day during the petrol shortage in the '80s. The reason why was confusing, but the police didn't take any action.

Miss Clark admitted to a couple of speeding tickets.

Ever had a cigarette, then?

"I had a puff once" Miss Clark said, but that was when she was a student and who didn't?

Sainsbury frowned, and then suggested it would have been easier for both of them to have said they believed in God and went to church.

"It's better to come in here and say what we really think," Miss Clark told him.

This 90-minute campaign episode was a polite affair and viewers would have found out a lot more about policies than they had the chance to in previous debates.

That was mainly because the leaders didn't shout at each other, and maybe that was influenced by having watched Barack Obama win another election just two hours earlier.

Miss Clark said the reception he got brought a lump to her throat. Mr Key was impressed as well.

They covered the economy, health, education, the environment and law and order.

Mr Key was solid with his policy points and he managed to mention Kiwis leaving in droves several times. His answer was standard National - grow the economy, increase opportunities, cut the red tape, give people a chance to get ahead under their own steam.

Miss Clark came across as more caring. She cared about workers who might lose their jobs, she was passionate about helping people who couldn't look after themselves.

After the debate both leaders told reporters they thought people had seen a different side of them.

"You know, I think that's good ... we are both very passionate about the future of New Zealand, we passionately want the job of being prime minister," said Mr Key.

She thought the US election had an impact on the way she and Mr Key had behaved.

"We've seen magnanimity from the US candidates towards each other, that may well have been the background against which we came into it."