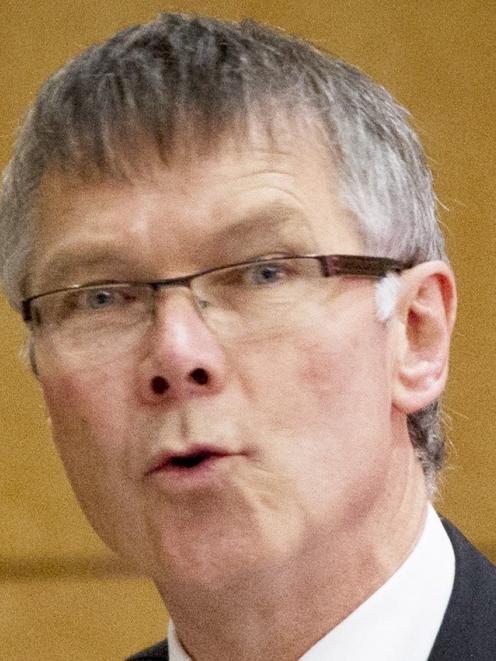 David Parker
Amid the energy-sapping and morale-draining bouts of bedlam afflicting the New Zealand Labour Party, one senior caucus figure gives every impression of being a veritable rock of calm and stability.

Mr Parker's standing was further boosted this week by the release of Labour's alternative Budget, a document that somehow manages to be both cautious and audacious - and is all the better in political terms for being so.

The figures and forecasts have been worked, reworked and worked again to ensure they survive the scrutiny to which National will no doubt subject them. But that constraint has not stopped Mr Parker inserting a major surprise in the package. He has taken the battle over economic policy into what National views as its own territory by flagging the possibility of income tax cuts.

Admittedly, such cuts would have to wait until Labour's second term in Government, due to the lengthy period before Labour's capital gains tax really starts cranking out revenue. Even so, when was the last time a Labour finance spokesman mentioned tax cuts while still ensconced on the Opposition benches?

Mr Parker's innovative thinking and hard work is likely go unrewarded for now. One day, presuming he sticks around long enough, he will be minister of finance. Judging from his record so far in Opposition, he will probably be a very good one.

Unless there is something of a miracle in the next three months, however, he will not get his mitts on the portfolio before 2017 at the earliest.

He will be able to blame a combination of factors for that, ranging from the pick-up in economic growth, which is of huge benefit to National, to Mr Cunliffe's string of mistakes.

But knowing the Presbyterian streak that runs through Mr Parker, he will more likely blame himself.

He shouldn't. True, at times he seems to disappear from public view, seemingly abducted by aliens who reprogramme him to issue continual warnings of pending economic catastrophe as the inevitable result of New Zealand's shocking current account deficit.

Mr Parker is one of a long list of politicians ranging from Jim Anderton in the 1990s to the Greens' Russel Norman who are members of this Doomsday Cult and whose forebodings of disaster are about as accurate as the predictions of the end of the world made by Jehovah's Witnesses.

Mr Parker can also be pointy-headed at times. There is little point in winning arguments that your target audience cannot understand. As Labour's economic reform agenda has begun to crystallise, however, Mr Parker has come out of his shell and started to confront National on whether it is simply sitting back and basking in the current surge in economic growth, but doing little to prolong it. Labour, on the other hand, is unquestionably looking long-term at how to sustain the upturn at consistently higher levels.

Mr Parker now has an array of policies that, while not necessarily popular - the capital gains tax being the obvious example - have the long-term national interest at heart.

On that score, Mr Parker passed a major test this week in presenting an alternative Budget that is both visionary and responsible in addressing matters such as national savings through KiwiSaver and an early resumption of contributions to the Cullen super fund.

National's response was utterly predictable. Interviewed on National Radio's Morning Report, Steven Joyce was castigating Labour within seconds for producing yet another ''tax and spend'' package.

He was technically correct. Labour is flagging higher levels of government spending in some areas. But these will be balanced by savings in other areas and increases in revenue. These are spelled out in detail in the alternative Budget, which Mr Parker claims is the most comprehensive set of costings and forecasts of the fiscal impact of various policies produced by a political party.

Mr Parker's boasting does himself and others in his party a disservice. A similar ''fiscal strategy'' report issued just before the last election was arguably even more detailed. The trouble was that document was a hurried response to Phil Goff being hammered by John Key during a debate in Christchurch in the early stages of the election campaign.

Goff ''show me the money'' was the defining moment of that campaign until it was blown out of the water by the infamous cup of tea between Mr Key and Act New Zealand's John Banks.

Caught up in the shambles over Labour's 2011 costings and the far-too-belated attempt to remedy it, Mr Parker is determined to avoid a repeat. He timed the release of his version at an earlier stage to pre-empt National's inevitable attempt to paint it as another example of Labour's fiscal laxness.

It is vital that Labour steers the economic debate rather than becomes a victim of it. Somehow, Mr Parker has to silence National's ''tax and spend'' jibe. Given his caution means there is only a modest difference between National's and Labour's spending tracks when overall spending is taken into account, Mr Joyce's ''tax and spend'' line becomes slightly ludicrous.

In fact, Labour's tight allowance for new spending may make potential coalition talks between Labour, the Greens and other parties even more tricky.

In addition, Mr Parker has insisted that Labour not reverse its intention to raise the age of eligibility for New Zealand Superannuation. Raising the age, something John Key refuses to address, provides Mr Parker with solid proof Labour is serious about fiscal rectitude.

But that will not stop the likes of Mr Joyce from pinging Labour. He and Bill English will probably shift the argument by suggesting that although Labour is promising to keep the lid on spending, its record in the last years of its previous term offers no guarantee it would not stray from any self-imposed limits on spending. And as long as voters believe that, National will keep hammering that theme.