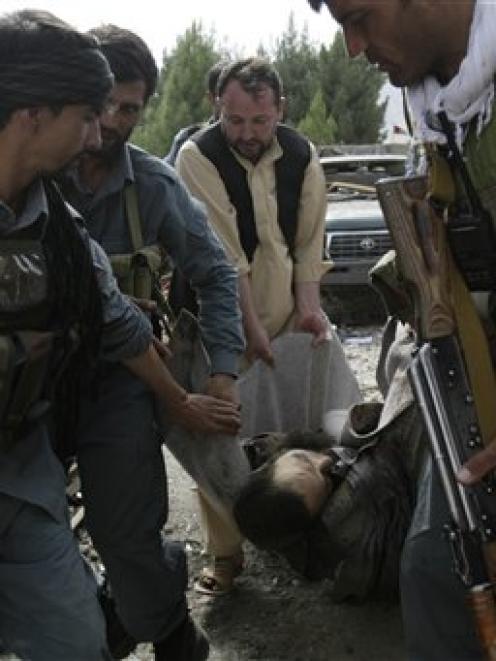 Afghan police men carry the body of suicide bomber wrapped in a carpet inside governor's compound in Parwan provincial capital of Charikar, 50km north of Kabul, Afghanistan. (AP Photo/ Ahmad Jamshid)
Six suicide bombers have attacked a governor's security meeting in one of Afghanistan's most secure provinces, killing 22 people and driving home the point that the Taliban is able to strike at will virtually anywhere in the country.

The governor of Parwan, a relatively peaceful eastern province just 50km north of Kabul, survived. He said he picked up an assault rifle and shot at least one of the attackers dead from the waiting room of his office.

Two other insurgents detonated their vests, causing most of the deaths and burning part of the governor's offices. Several cars were wrecked by shrapnel and bullets. Broken glass and body parts littered a charred lawn.

The bold daylight assault in Charikar follows a similar attack by suicide bombers at a major Kabul hotel in June, and the downing of a U.S. helicopter full of U.S. special operations troops only 60km away from Kabul. The attacks in and close to the capital raise more questions about Afghanistan's ability to defend itself as the U.S.-led coalition hands more of the country over to its struggling forces.

Police said Sunday's assault began outside the front gate, where a car bomber set off an explosion that smashed through a wall of the compound, allowing five other insurgents toting assault rifles and rocket-propelled grenade launchers to enter. The attack interrupted a provincial security meeting attended by Parwan Gov. Abdul Basir Salangi, his police chief, intelligence director, a local army commander and at least two NATO advisers.

All the attackers wore suicide vests, and at least three of them were dressed as police officers, police said. Two attackers made it across a courtyard and detonated their vests inside the governor's headquarters building, but three others were killed before they could enter, police said.

Salangi told The Associated Press that he and his aides fired at insurgents from his offices. He claimed to have killed one of the attackers.

"I had an AK-47. I shot him from the window of my waiting room," said Salangi, who was formerly the police chief of Kabul and a rebel fighter during the Soviet occupation of Afghanistan in the 1980s. He said it was the second time in the past month he was targeted by an assassination attempt.

"The last attacker was killed by police when he was only about 15m away from me," said Maladani. The bomber was killed before he could detonate his explosives.

Sixteen of the dead were civilian Afghan government employees and six were policemen, according to the Afghan Interior Ministry. At least 37 other people were injured.

The U.S.-led coalition plans to send 10,000 troops home by the end of the year and is considering whether to move forces from Taliban heartlands in the south to reinforce troops fighting insurgents in the east.

Southern provinces like Kandahar and Helmand are the Taliban's traditional stronghold, while the east is a base of operations for many Pakistani-based Taliban and international terrorist affiliates like al-Qaeda and the Haqqani network.

Afghanistan's eastern border with Pakistan is also a common thoroughfare for insurgents attempting to strike Kabul, although Parwan is considered to be one of the country's most secure areas.

The tactics used by the bombers in Parwan were similar to those used in the June attack on the Intercontinental Hotel, which was stormed by nine insurgents armed with bomb vests, rifles and rocket launchers on the eve of a major conference on Afghan governance. They killed at least 12 people and held off NATO and Afghan forces for five hours, until U.S.-launched helicopter airstrikes killed the last insurgents hiding on the roof.

Both attacks, along with the August 1 downing of a Chinook helicopter in neighbouring Wardak province, underscore how the war is encroaching upon the nation's capital.

The Parwan attack is also another example of the Taliban's determination to strike the Afghan government by attacking government installations, ambushing its armed forces and attempting to assassinate its officials.

In May, a suicide bomber attacked the compound of the governor of Afghanistan's northern Takhar province, killing a general, a regional police commander in the north and the provincial police chief. Takhar's governor, Abdul Jabar Taqwa, was injured in the attack.

In Kandahar alone, assassins in recent months have killed the provincial police chief, the province's top cleric, the mayor of the provincial capital and Ahmad Wali Karzai, the powerful half-brother of the Afghan president.

Meanwhile, NATO announced that three service members were killed on Sunday in two separate improvised bomb attacks. The international coalition did not release any further details about the deaths.

The French Defense Ministry said one of its soldiers was killed Sunday by isolated fire during an operation in the northeast province of Kapisa.

The four deaths bring to 385 the number of coalition service members killed in Afghanistan this year. Sixty-two of them were killed this month.