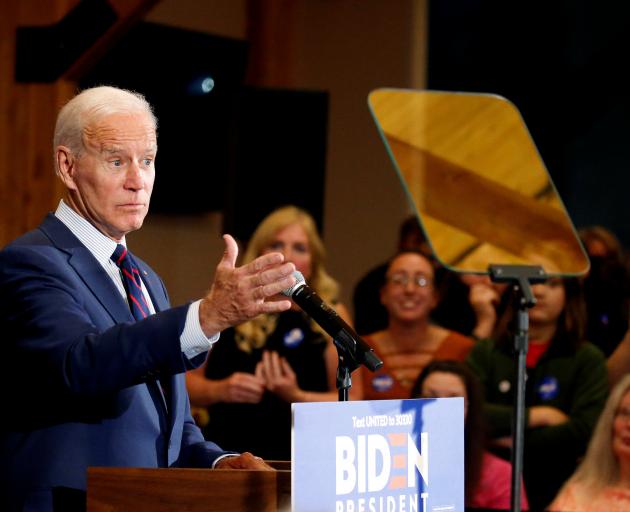 The televised Los Angeles event was the second major presidential forum dedicated to LGBTQ issues during the Democratic nominating campaign, following an event in Iowa last month that drew 10 of the 19 candidates vying to take on President Donald Trump in the November 2020 election.

Biden, the front-runner in the Democratic race, struggled to articulate his positions during the previous forum, particularly his vote as a US senator for a military funding bill that included the "don't ask, don't tell" policy that banned harassment of closeted gay soldiers but barred those who were out from military service..

Biden later backed repeal of that policy and, while he voted for a law defining marriage as between a man and a woman, he backed same-sex marriage before President Barack Obama, under whom he served as vice president.

He defended his record on Thursday night and assailed efforts to curb LGBTQ rights.

"I would curtail foreign assistance to countries who engage in this kind of behaviour," said Biden, who also said he would establish an office in the State Department with the job of promoting LGBTQ rights around the world.

Biden was followed by South Bend, Indiana, Mayor Pete Buttigieg, who is vying to become the first openly gay US president.

Buttigieg spoke about his experience as a gay man. He recounted serving in the military in Afghanistan while he was still closeted and realizing he might die without being able to know what it was like to fall in love and marry.

Buttigieg's personal experience also coloured his answer on the subject of public health rules that bar gay men from giving blood dating from the HIV epidemic of the 1980s and 1990s.

"My blood is not welcome in this country and it's not based on science," Buttigieg said. "It's based on prejudice."

He said he would move to change the policy if elected president.

Senator Bernie Sanders, a top Democratic contender, missed the event while he recovers from a heart attack.

Gay rights advocates have expressed dismay at the Trump administration's record on LGBTQ issues, including a ban on transgender individuals serving in the US military.

Lawyers for the Department of Justice argued at the US Supreme Court this week that federal civil rights law does not prohibit employers from firing workers based on their transgender identity or sexual orientation.

Ahead of the forum, Buttigieg and US Senators Elizabeth Warren and Kamala Harris released plans to secure equality for LGBTQ people.

All three support the Equality Act, like most other Democrats, which would explicitly add LGBTQ protections to federal anti-discrimination law.

They also vowed to make pre-exposure prophylaxis, a drug that helps lower the risk of contracting the human immunodeficiency virus, accessible and affordable to all who want it.

Buttigieg said he would eliminate the HIV/AIDS epidemic by 2030, in part by restoring the White House Office of National AIDS Policy that has gone dormant under Trump.

All three candidates promised to elevate LGBTQ concerns as president. Warren said she would appoint a special envoy at the State Department, while Harris said she would create a White House position, chief advocate for LGBTQ+ Affairs, to coordinate efforts across the entire federal government.

Warren, who has risen steadily in the polls to challenge Biden as the frontrunner, drew the biggest applause of the night as she addressed issues most of the candidates agreed on in a down-to-earth way.

A forum participant asked how she would respond to someone who cited religious opposition to gay rights, defining marriage as a union between a man and a woman.

"I'm going to assume it was a guy who said that, and I'm going to say, 'Then just marry one woman'," Warren said.