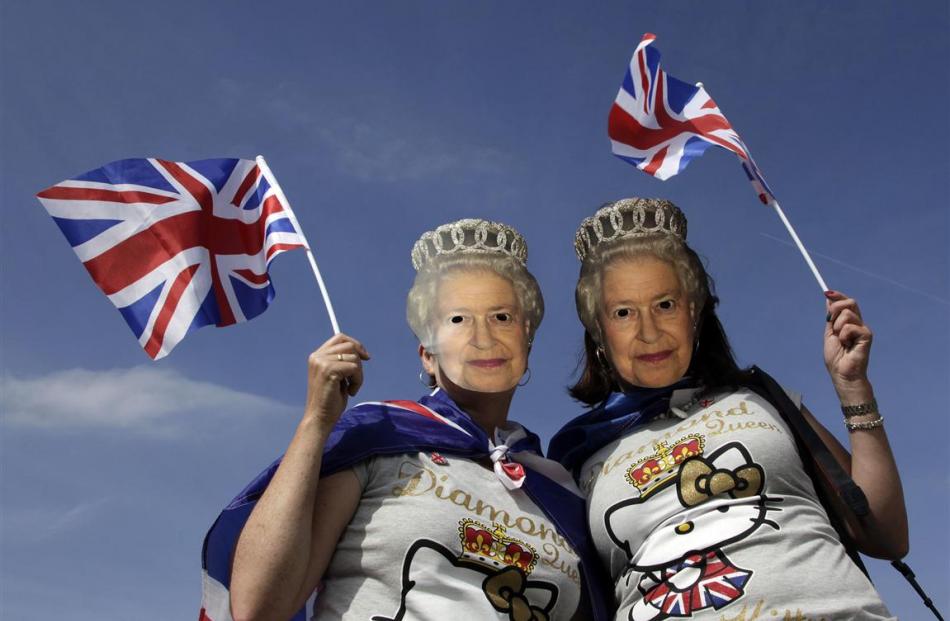 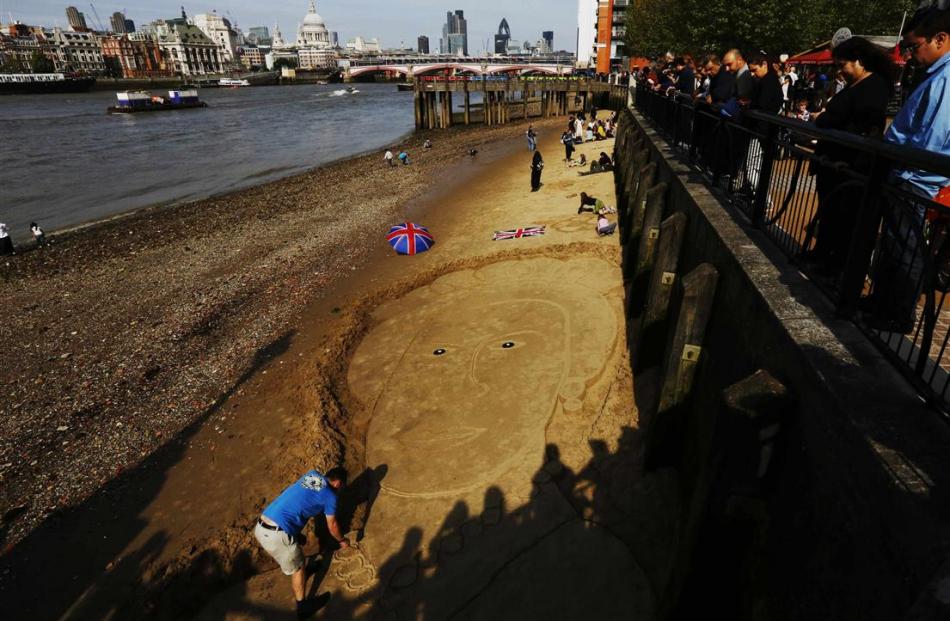 A man creates an image of Britain's Queen Elizabeth in the sand on the banks of the River Thames.. REUTERS/Luke MacGregor. 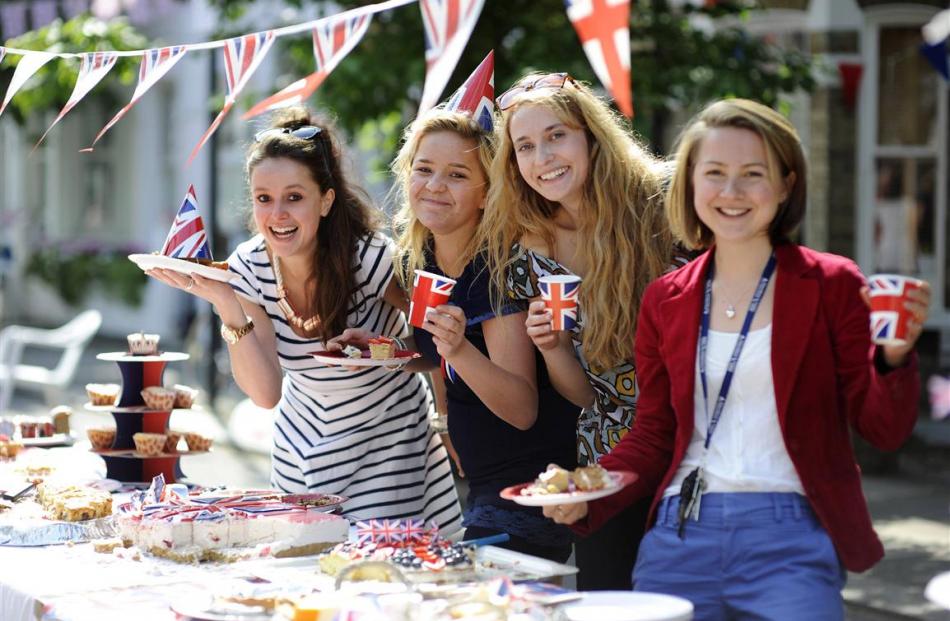 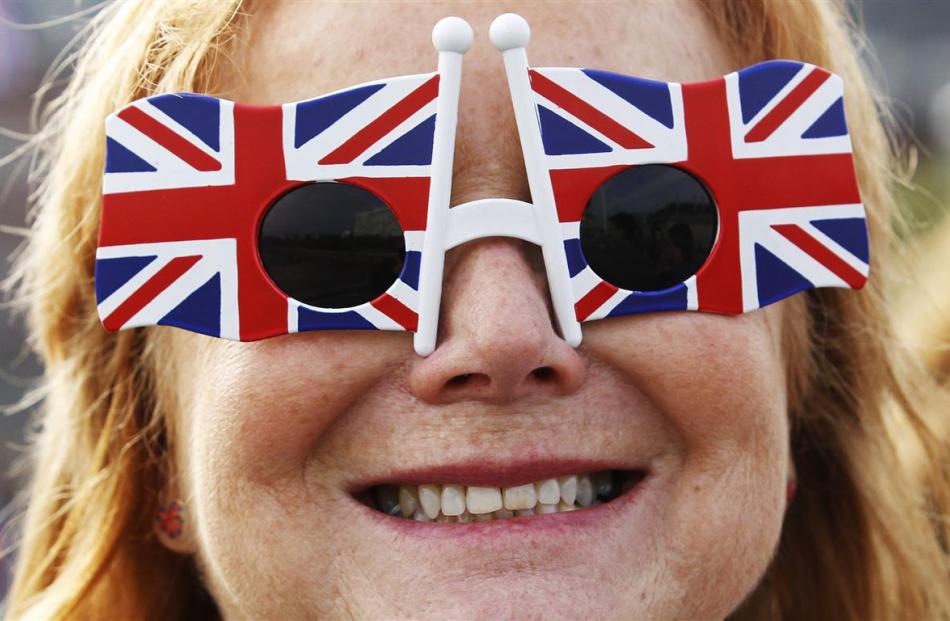 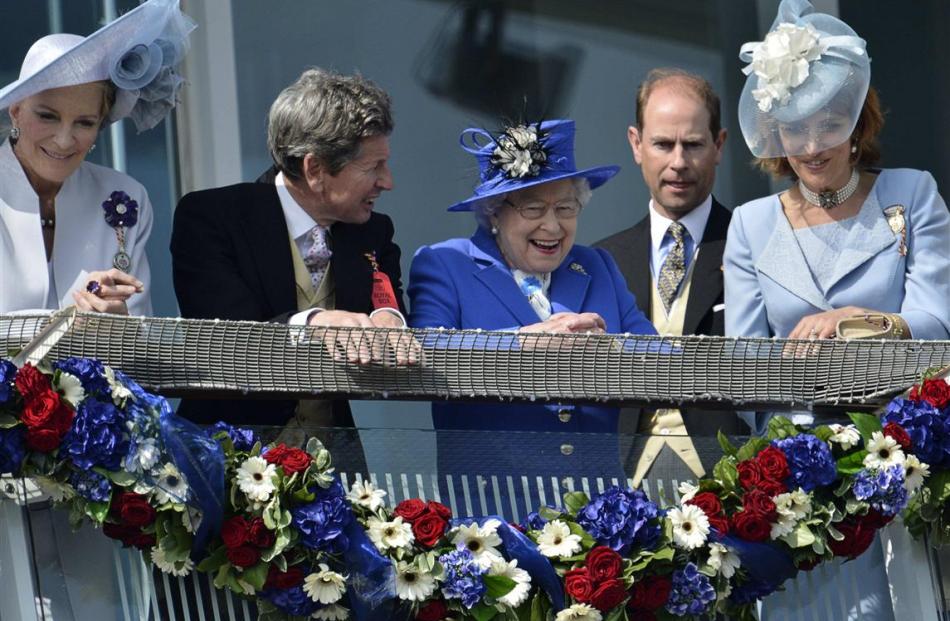 Queen Elizabeth smiles after the Epsom Derby horse race at at the launch of four days of nationwide Diamond Jubilee celebrations. REUTERS/Toby Melville

A beaming Queen Elizabeth enjoyed a day at the races, indulging a lifelong passion for horses at the launch of four days of nationwide Diamond Jubilee celebrations to mark her 60 years on the British throne.

Wearing a blue coat and matching hat, the 86-year-old was greeted by tens of thousands of flag-waving well-wishers at the Epsom Derby in southern England to watch one of the racing calendar's richest events.

Welsh opera singer Katherine Jenkins led the crowd in singing the national anthem as the queen and husband Prince Philip looked on, reflecting a mood of patriotism that has swept the country as the queen reaches a rare milestone.

Only one monarch has celebrated a diamond jubilee before - Queen Elizabeth's great-great-grandmother Victoria in 1897. The festivities mark the start of a summer of revelry in Britain with London also hosting the Olympic Games in July.

"It's a wonderful day to be British. It's not often you get a chance to show your pride," said racegoer Carole Peck from Ipswich in eastern England.

"All ages, all classes are mingling together with one thing in common. I think the whole thing with the Olympics, the queen and the Jubilee, it's time to fly the flag."

The queen is a keen horse rider and breeder, and visits Epsom every year. While few personal details are known about the famously discreet head of state, it is reported that she reads the Racing Post sports newspaper over breakfast each morning.

Amid a crowd wearing top hats and tails and women in their snazziest dresses, the queen looked on appreciatively from the royal box as Derby winner Camelot was heralded in the winner's circle. Later she presented trophies to the winning jockey, trainer and owners.

The focus turns to London on Sunday, where huge crowds are expected to line the streets and the River Thames for a series of spectacular events, although rain is forecast which could dampen enthusiasm.

Millions more are expected to attend street parties across the country as surveys of public opinion show the royal family's popularity is as high as it has been for decades.

Across Britain, red, white and blue "Union Jack" flags billow from street lamps, shop fronts and houses, and sales of patriotic souvenirs have rocketed ahead of the celebrations.

On Sunday, a flotilla of 1000 boats assembled from around the globe will sail along the Thames to accompany the queen and her 90-year-old husband on a royal barge, the largest such pageant for 350 years.

Thousands of street parties are planned across the country, including one in Downing Street outside Prime Minister David Cameron's office, as part of a "Big Jubilee Lunch".

The queen's London residence Buckingham Palace will host a pop concert on Monday featuring the likes of Paul McCartney and Elton John, before a network of beacons are lit across Britain and around the Commonwealth.

The celebrations culminate on Tuesday with a memorial service at St Paul's Cathedral, a carriage procession through central London and a fly-past by present and former Royal Air Force aircraft.

To royalists, the jubilee is a chance to express their appreciation of a woman who acceded to the throne in February 1952 on the death of her father George VI.

For others, the chance of some extra days off work and to enjoy the sort of public ceremony for which Britain is renowned has made the jubilee a welcome break from austere times, pay freezes and public spending cuts.

Republicans hope the occasion marks the last hurrah of what they say is a dying anachronism they estimate costs the taxpayer up to 200 million pounds a year.

About a million people are expected to travel to London for the flotilla alone, but not all will be cheering for the queen - banner-waving republicans plan to protest at Tower Bridge during the event.

Police said the weekend would include the largest royal security operation. About 13,000 officials including around 6,000 police officers will be on duty for the Thames pageant.