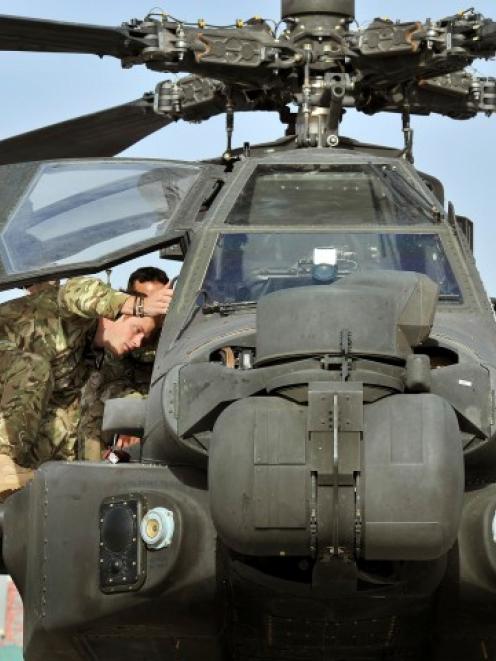 Prince Harry climbs up to examine the cockpit of an Apache helicopter at Camp Bastion in Afghanistan earlier this month. REUTERS/John Stillwell/pool
Two US Marines have been killed and other Americans wounded during a Taliban attack on a base in southern Afghanistan where Britain's Prince Harry is stationed, US officials told Reuters, speaking on condition of anonymity.

A spokesman for NATO-led forces in Afghanistan said Harry was on the base at the time of the attack but was unharmed.

"Prince Harry was never in any danger," spokesman Martyn Crighton said, adding that the NATO-led International Security Assistance Force (ISAF) would investigate whether his presence on the base had motivated the attack.

Crighton declined to offer that level of detail or give the nationalities of the victims. Crighton also did not say precisely how many people were wounded in the attack.

Earlier this week, the Afghan Taliban said they were doing everything in their power to either kill or kidnap Queen Elizabeth's grandson in what they dubbed their "Harry Operations."

Crighton said ISAF would investigate whether his presence on the base had motivated the attack.

Crighton said the attack took place between 9pm and midnight on Friday (local time) and that NATO-led forces were still securing the area in and around Camp Bastion.

The motivation for the attack will undoubtedly come under scrutiny. Violence is sweeping the Muslim world over a film that insults the Prophet Mohammad, although the Pentagon earlier on Friday said protests in Afghanistan were so far peaceful.