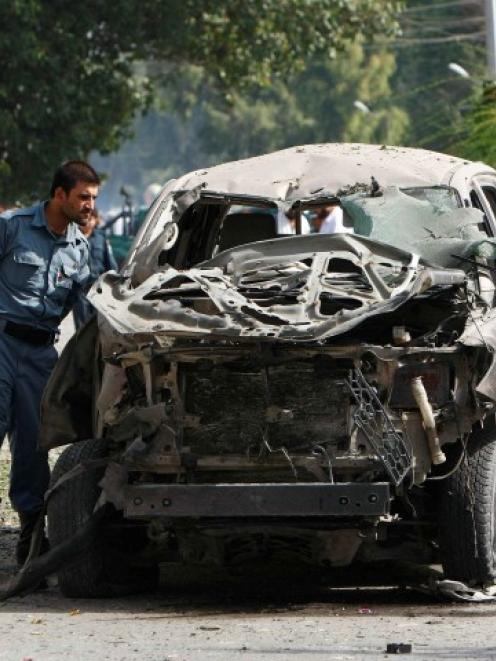 The bloodshed underscored a surge in fighting ahead of a withdrawal by most Western combat troops and handover to Afghan forces winding up in 2014. NATO-led forces have been struggling to eliminate Taliban insurgent bastions, especially in the east.

Suicide bombings in markets in the southwest province of Nimroz killed at least 28 people - 18 of them civilians and three policemen - and wounded over 70, police said, in the deadliest day of violence in the normally peaceful region since 2001.

Women and children and at least three members of the Afghan security forces were among the dead in Zaranj, the capital of the largely rural province, which lies on Afghanistan's western border with Iran.

Another bomber blew himself up in front of Zaranj hospital, while two others detonated explosive vests in other areas of the city, killing mostly civilians, President Hamid Karzai's office said in a statement.

The toll in Zaranj was expected to rise, provincial governor Abdul Karim Barahawi said. "The attackers blew themselves up in crowded markets to target civilians. There was no government installation nearby," Barahawi said.

Another 10 civilians were killed and 28 injured when a bomb went off in a bazaar in Dashte Archi district in the northern province of Kunduz, district Governor Sheikh Sadruddin said.

All the outdoor markets attacked by the bombers had been packed with people buying food and supplies to end their daily Ramadan fast, local police said.

An Afghan policeman killed 11 colleagues in Nimroz province on Saturday, firing on them at a checkpoint in Dilaram district, adding to a recent spate of such killings that have alarmed NATO commanders and left 34 foreign soldiers dead.

Afghanistan's Interior Ministry this week that the Taliban had not let up on attacks during Ramadan and security forces had stepped up security ahead of the Eid al-Fitr festival ending Islam's holiest month.

Despite a decline in civilian casualties in the first half of this year compared to 2011, the United Nations last week said Afghan civilians were still bearing the brunt of fighting between insurgents and the foreign-Afghan coalition.

A spokesman for NATO-led forces said he had no details on Tuesday's attacks. A member of parliament, Sharifa Hamidi, told Afghanistan's Tolo Television that the attacks were "brutal (and) cannot be justified".

A half-yearly report by the United Nations last week said 1,145 civilians have been killed between Jan. 1 and June 30 this year as well as 1,954 wounded, representing a 15 percent decline on last year due to a severe winter that hampered fighting.