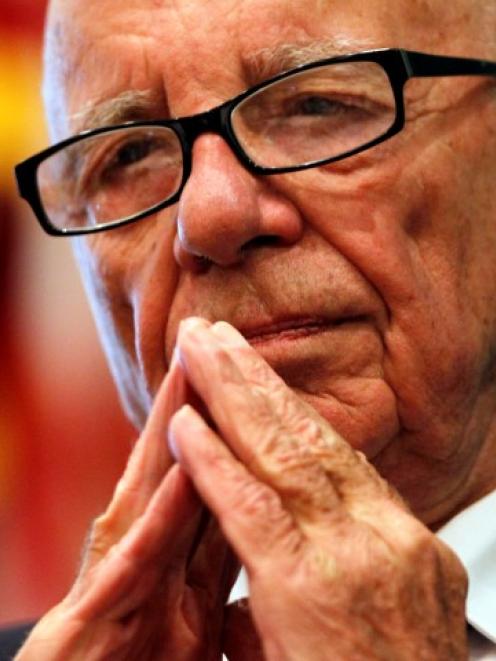 Rupert Murdoch. Photo Reuters
Rupert Murdoch has turned from one straight-talking New Zealander to another, appointing pay-TV executive Mike Darcey to run his troubled British newspaper arm through what is likely to be another tumultuous period for the Sun and Times titles.

Darcey will become chief executive of News International at the start of the year, before a series of high-profile criminal trials stemming from a phone hacking scandal and a group restructuring that could expose the papers to a harsh economic climate.

The fact Murdoch has tapped a former economist known for signing commercial deals and boosting subscription revenues in his role at BSkyB reflects the changing pressures on the newspaper business, analysts and colleagues said.

"He's meticulous in his thinking, he's extraordinarily cool and calm and he does not get emotional," media consultant Claire Enders said. "He's a known quantity to investors who follow BSkyB and he will be a reassuring presence.

"But it's brave of him to take on that role."

Murdoch revealed the appointment of the 47-year-old Darcey, who has no newspaper experience, as part of a wider announcement detailing how he will split his News Corp media conglomerate into two publicly-traded companies.

The more profitable pay-TV and film assets will be held in one entertainment arm called Fox, while the smaller publishing division will retain the News Corp name and include newspapers such as the British titles, the Wall Street Journal, the New York Post and the HarperCollins book publisher.

The publishing arm will be run by Robert Thomson, the current managing editor of the Wall street Journal and editor in chief of its publisher Dow Jones.

"While Thomson is a newspaper man through and through, Darcey is the hands-on commercial guy," one former colleague of Darcey's told Reuters. "He will be the perfect foil to Robert Thomson.

"Commercial deals, strategic decisions, wholesale partnerships, regulation and policy dealings are his bread and butter. He's pushed Sky's content online and via mobile phones and those are all skills needed by newspapers right now."

Darcey will need to tackle the continued fall out from the phone hacking scandal, a string of arrests of staff at the daily Sun tabloid over illegal payments, and the structural changes hitting the wider newspaper industry.

Like all newspapers, the News International titles have been hit by falling advertising and circulation revenues in recent years, while they will have to prepare for a tougher regulatory environment after a public inquiry called for a new law to make sure a scandal like phone hacking can never happen again.

As part of a smaller publishing division, the Sun and Times titles could also be exposed to far greater scrutiny of their cost base by investors, unlike when they were part of the wider News Corp with its $58 billion market valuation.

Darcey, who is married with two children, will replace Tom Mockridge, another former Murdoch TV executive and New Zealander, parachuted in to run News International at the height of the hacking scandal last year. He quit on Sunday.

"To be direct, the reason I am leaving is that the new structure does not offer me a role I am comfortable with," he said in an email to staff seen by Reuters, in reference to the fact he lost out on the top publishing job to Thomson.

"After 22 years with the company in five countries, I feel I have made enough of a contribution to make a personal choice to go."

Mockridge joined News International at a time of great upheaval, as the company struggled to get to grips with a scandal that damaged the reputation and value of News Corp, resulted in numerous arrests and tarnished the names of a string of senior executives.

His predecessor Rebekah Brooks was forced to step down after the now-defunct News of the World Sunday tabloid admitted it had hacked into phones on an industrial scale to generate salacious stories. She has since been arrested in connection with phone hacking and other allegations.

Unlike Brooks, who counted former and current prime ministers as close friends, Darcey is unlikely to adopt a high-profile political role in Britain.

Mockridge brought stability to the Sun and Times newspapers by maintaining a low profile and introducing a raft of digital initiatives that saved costs and boosted digital readership.

Sources inside News International's Wapping headquarters near the Tower of London on Monday said uncertainty was felt throughout the newspaper arm, with executives ducking in and out of meetings all day.

Former and current senior staff at News International said Mockridge's departure was a huge blow, although they thought Darcey would fit into a similar mould.

"Mike is a world-class executive with unprecedented strategic and commercial experience and I look forward to benefiting from his many talents," Murdoch said in his statement.

"His broadcasting background will provide important leadership in the development of our already impressive suite of digital products at News International."