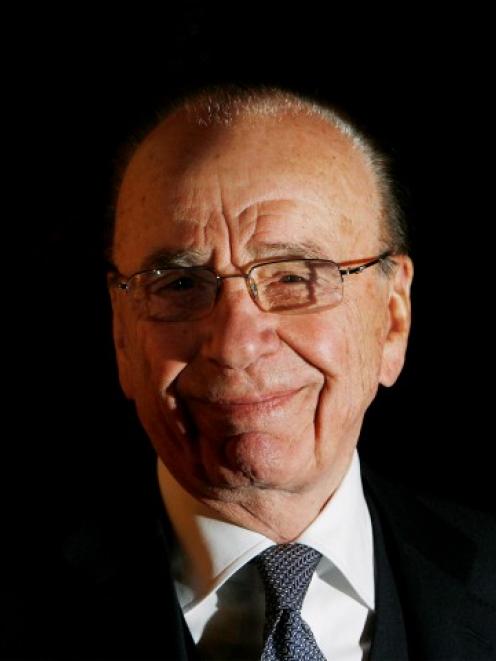 Rupert Murdoch. Photo Reuters
Rupert Murdoch has called his News of the World tabloid an "aberration", accusing journalists of hiding phone-hacking from himself, his son James and his protegee Rebekah Brooks, and said he wished he had shut it down sooner.

"The News of the World, to be quite honest, was an aberration, and it's my fault," the media mogul said in a second day of testimony in Britain's High Court on Thursday. "I'm sorry I didn't close it years before."

But he went out of way to defend his Sun tabloid, Britain's top-selling daily. It has not been touched by the phone-hacking scandal, although several of its journalists have been arrested on suspicion of bribery.

"I've tried to distinguish, throughout this, the difference between the Sun and the News of the World. You lump them together all the time and I think it's grossly unfair to the Sun," Murdoch told a judicial inquiry into press ethics.

The 81-year-old admitted he had not paid enough attention to the News of the World but did not accept that he had allowed a culture of illegality to flourish.

"I think in newspapers, the reporters do act very much on their own, they do protect their sources, they don't disclose to their colleagues what they are doing," Murdoch said.

"Someone took charge of a cover-up, which we were victim to and I regret," he said.

The inquiry's top counsel, Robert Jay, picked up on Murdoch's admission of a cover-up, causing consternation among Murdoch's legal team, and forcing Judge Brian Leveson to ask one of the party to sit down.

Asked where the culture of cover-up had originated, Murdoch answered: "I think from within the News of the World. There were one or two very strong characters there who I think had been there many, many years and were friends of the journalists.

"The person I'm thinking of was a friend of the journalists and a drinking pal and clever lawyer and forbade them ... to report to Mrs. Brooks or to James," said Murdoch.

In a response later, the News of the World's former top lawyer Tom Crone called Murdoch's assertions a "shameful lie".

The appearance at the inquiry of a man who has courted prime ministers and presidents for 40 years was a defining moment in a scandal that has led to accusations of collusion between British politicians, police and Murdoch's News Corp.

The tone of Thursday's hearing became increasingly heated, as Jay described the culture of phone-hacking as a "cancer".

When he suggested that News International, the British newspaper arm of News Corp, had shown a "desire to cover up, not expose", Murdoch snapped back: "Well, to people with minds like yours," before quickly adding: "I take that back."

Jay, keeping his cool, assured him: "I'm very thick-skinned Mr. Murdoch. Do not worry one moment."

"A journalist doing a favour for someone in returning for a favour back is pretty much everyday practice," he said. "It's a common thing in life, way beyond journalism, for people to say: 'I'll scratch your back if you scratch my back.'"

Neil Chenoweth, an Australian journalist who has spent more than two decades investigating Murdoch and has written two books about him, said: "He doesn't get it."

"If he doesn't understand that simple point, all his assurances about never acting improperly begin to fray at the edges, because it raises questions about whether he really understands what behaving properly is."

Murdoch described how the corporate mood had changed after last July's revelation that the News of the World had hacked into the voicemail of missing schoolgirl Milly Dowler, later found murdered.

"You could feel the blast coming in the window," he said, explaining why he had decided to close down the 168-year-old News of the World, for decades Britain's best-selling Sunday tabloid. "I panicked. But I'm glad I did."

The move was seen by angry News of the World journalists as a bid to save Brooks, the editor of the tabloid at the time when much of the phone-hacking occurred, whom Murdoch had later promoted to run the whole of News International.

Brooks, known for her distinctive mane of red hair and relationships with top politicians, resigned a week later and has since been arrested twice on suspicion of charges related to hacking and bribery.

The scandal also put an end to News Corp's long-cherished ambition to buy the 61 percent of satellite broadcaster BSkyB it did not already own, in what would have been a $12 billion deal and the company's biggest-ever acquisition.

The company had cultivated Culture Secretary Jeremy Hunt, who had the job of adjudicating on a move that was controversial because it would have increased Murdoch's already considerable media ownership in Britain.

On Tuesday, the inquiry was told of hundreds of emails exchanged between News Corp's top London lobbyist and James Murdoch, which boasted of the company's access to Hunt's office and privileged access to sensitive information.

Hunt's aide, Adam Smith, resigned the next day, and opposition politicians are calling for Hunt to quit.

Rupert Murdoch said he had not got involved in the politics of the BSkyB bid and could not recall being given updates by his son James, who was at the time chairman of News International and of BSkyB.

"I don't remember any conversation, to be honest with you, but I'm assuming that he kept me up to date to some extent. I delegated the situation to him, I left it to him," he said.

Separately, British broadcasting regulator Ofcom said on Thursday it had requested documents from News International to help it in its assessment of whether BSkyB was a fit and proper owner of a broadcast licence, given News Corp's stake.

The scandal has raised questions over whether the police declined to properly investigate because of Murdoch's influence.

While most British newspapers splashed Murdoch's appearance at the inquiry on their front pages, his own Sun newspaper reserved the news for page 10 on Thursday.

The Sun also printed an excoriating editorial about the government under the headline "Dipsticks", a play on the news that Britain's economy may have fallen into a double-dip recession.

"The Tory leadership are adrift," the Sun said. "They muddle on, hoping something might turn up."

"And indeed it might. If there were an election tomorrow, who could say (Labour Party leader) Ed Miliband might not win it?"

The rival, left-leaning Daily Mirror tabloid pictured Murdoch with former prime ministers Margaret Thatcher and Tony Blair and with Cameron in his pocket, under a headline "Empire of the Sun".