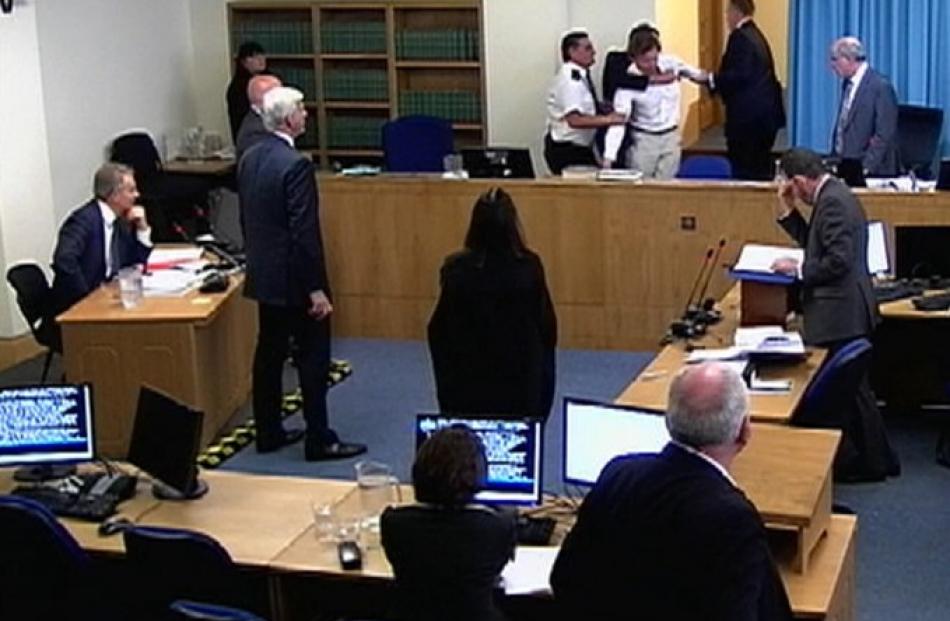 A still image shows a protester being restrained by security as Britain's former prime minister Tony Blair (L) speaks at the Leveson Inquiry into the culture, practices and ethics of the media at the High Court in London. Photo Reuters

British leaders have no choice but to court powerful media barons such as Rupert Murdoch or risk savage press attacks which are "full on, full frontal, day in, day out," former prime minister Tony Blair told an inquiry.

Interrupted by a heckler who accused him of being a war criminal for supporting the U.S. invasion of Iraq, Blair paused briefly before continuing calmly to justify his ties to Murdoch with whom he developed a close friendship.

An unwillingness to take on the press in Britain has been cited by many as the reason a culture of illegality and phone hacking came about at Murdoch's tabloids, but Blair told the inquiry into media standards that he had had little choice.

He could either risk being torn apart by what he once described as the "feral beasts" of the media, or use them to get his policies implemented.

He never agreed a deal with Murdoch, he said, and only became godfather to his daughter after he left office. Calling the mogul three times in the days before the invasion of Iraq was also not particularly odd, he added.

"With any of these big media groups, you fall out with them, you watch out, because it is literally relentless and unremitting once that happens," Blair, looking tanned and smart in a navy suit and white shirt, told the inquiry.

"My view is that that is what creates this situation in which these media people get a power in the system that is unhealthy. I took the strategic decision to manage this and not confront it but the power of it is indisputable."

Blair, whose reputation for obsessive media management brought him so close to Murdoch that the tycoon would joke about their love making, said he became increasingly concerned about the unhealthy relationship between the media and politicians.

Blair is the most senior politician to date to appear before Leveson, an inquiry sparked by the phone hacking revelations but which has since broadened out to show the collusion between senior politicians, media tycoons and police.

"If you fall out with the controlling element of the Daily Mail, you are then going to be subject to a huge and sustained attack," said Blair, who governed Britain from 1997 to 2007 after rebranding the Labour Party.

"Managing these forces was a major part of what you had to do and was difficult," he said.

The inquiry has so far focused on the close ties between Murdoch's empire and serving ministers, helping the opposition Labour Party leader Ed Miliband to consolidate his position with attacks on current British Prime Minister David Cameron.

The appearance of Blair had been seen as a potential threat to this approach, but the former prime minister was rarely troubled by the lead lawyer at the inquiry, reminding observers how he comfortably led his party to three election victories.

Describing what it feels like when a small section of the press decide to go after you, Blair said: "It's full on, full frontal, day in, day out and that is not journalism in my view. That's an abuse of power."

Sometimes using Murdoch's first name, Blair said it had been clear that the proprietor called the shots in his media empire, and not his newspaper editors. The two later became so close that having stepped down as prime minister, Blair became a godfather to Murdoch's daughter Grace at a ceremony on the banks of the river Jordan.

"Blair led the way in having no shame about courting Murdoch," said Ivor Gaber, professor of political journalism at City university. "He set the style and the standard and if you regard Cameron as the 'heir to Blair' then it's not exactly surprising that he followed suit."

Murdoch's papers also supported Blair in his unpopular decision to join the United States in the invasion of Iraq.

With anger still running high in Britain over Blair's role in the war, a protestor broke into court 73 to harangue him, entering through a supposedly secure entrance to stand between Blair and the chairman of the inquiry, Lord Leveson.

"This man is a war criminal," he yelled, as security guards tried to drag him from the court. Another protestor hit Blair's chauffer-driven black Range Rover with an egg as he later left the court.

"I'd forgotten just what a convincing, classy liar Blair is," one observer said on Twitter. "Not so much a testimony as a masterclass."

Blair set the tone for his relationship with Britain's press when, before his first election victory in 1997, he flew to Australia in 1995 to speak before a gathering of Murdoch's executives who had previously used their British tabloids to vilify his Labour Party predecessors.

The decision, mocked by rivals as an act of homage to the all-powerful media boss, infuriated much of his left-of-centre party who saw the Australian-born tycoon as a right-winger who had helped to keep them out of power for years.

But Blair's speech received a standing ovation and Murdoch indicated for the first time that he could be willing to switch the allegiance of his newspapers to the Labour Party.

"If our flirtation is ever consummated Tony then I suspect we will end up making love like porcupines, very, very carefully," he told him.