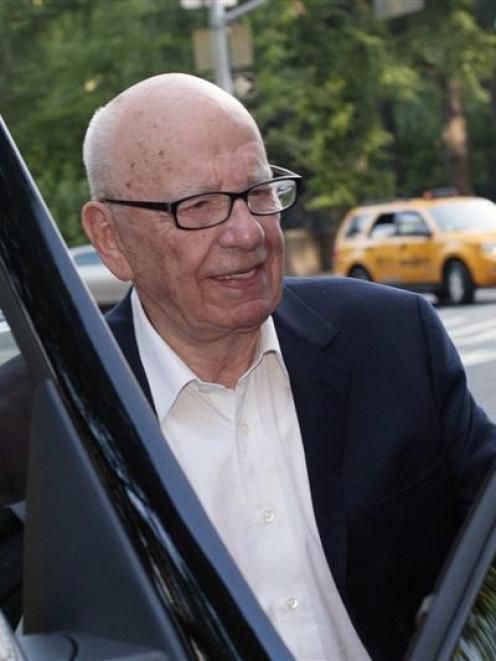 News Corp chief executive and chairman Rupert Murdoch. Photo by Reuters.
The Rupert Murdoch-controlled News Corporation recently announced it was considering the split-off of its publishing businesses into a separate publicly traded company. Craigs Investment Partners broker Chris Timms believes the split will be positive for the shares, even beyond the initial reaction. Business editor Dene Mackenzie reports.

News Corp, the Rupert Murdoch-controlled media conglomerate, has had its fair share of headlines in the past two years, forcing the closure of one tabloid in the United Kingdom and dashing hopes for total control in a television company.

The phone-hacking scandal in the United Kingdom spread across the Atlantic to the United States, as celebrities came forward saying their personal information had been splashed across the front page of tabloid newspapers.

British Prime Minister David Cameron even appeared before an inquiry and was questioned about his links to the Murdoch family and his friendships with leading News Corp editors and managers.

Craigs Investment partner Chris Timms said separating publishing could help isolate the hacking scandal from the rest of the company - both in terms of management distraction and contagion risk.

"This would not absolve News Corp from financial liability for historical behaviour. But it would, in theory, give Mr Murdoch greater editorial freedom in the future."

Mr Timms believed the decision to consider a spin-off was sparked by a new cost-cutting regime being put in place at the publishing division for the 2013 financial year as those businesses struggled with the impact from the hacking scandal, challenging economies and secular falls in some of those businesses.

"We expect Mr Murdoch would prefer to invest in the business, not starve it. Putting publishing into a separate company would allow both News Corp and publishing to be run optimally."

There were other obvious benefits, ones that Craigs and investors had espoused for a long time, Mr Timms said.

The split would simplify the company, as News Corp was the last remaining true media conglomerate.

It would also remove the most challenged business from the mix.

Uncertainty remained whether Mr Murdoch would approve the split plans but hopefully, the stock price reaction would prove encouraging, he said.

There was also uncertainty around how much cash and debt would be put into the spin-off.

The split could take between six and nine months and News Corp would need to indicate whether it could continue to repurchase stock while the process was under way. It should be possible unless it required a shareholder vote, Mr Timms said.

"Also unclear is whether this would change the regulatory environment in the UK for News Corp which had to abandon its bid for BSkyB following the hacking scandal at its UK newspapers. We would assume that UK regulators, at least initially, would see this move as cosmetic, with Mr Murdoch continuing to control 40% of the vote of both companies. We do not see a publishing spin-off as changing the landscape with regards to News Corp's interests in BSkyB - at least in the near term."

The most topical risk for the company was that the UK crisis could broaden to the US in a material way, to the extent News Corp employees or representatives hacked cell phones while they were in the US, Mr Timms said.

That could lead to a political uproar and a broad prosecution of News Corp's unrelated US businesses while adding to the potential liability from the crisis through the Foreign Corruption Act.

"Without questions, this is a volatile and remarkable process and News Corp shares might be regularly affected by news flow and outcomes from inquiries and investigations."

Craigs had factored in $US1 billion for law suits to its DCF (discounted cash flow) valuation of the company.