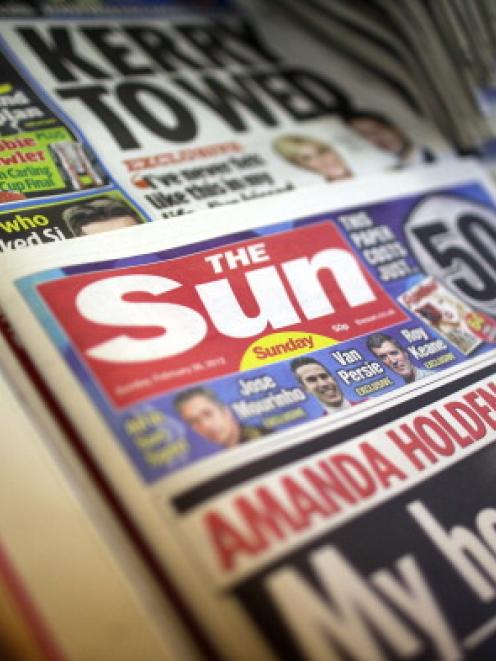 Photo Getty
As much a part of the saucier side of British 20th-century life as cheeky seaside postcards and innuendo-loaded comedies, the topless models in Britain's best-selling daily paper might soon be no more.

Media mogul Rupert Murdoch, whose Sun has featured a large picture of a bare-breasted model on page three since 1970, has indicated that it may be time for a change in tack.

In response to a tweet saying: "Seriously, we are all so over page 3 - it is so last century!", the 81-year-old Australian replied: "You maybe right, don't know but considering. Perhaps halfway house with glamorous fashionistas."

The exchange coincided with the latest in what have been perennial campaigns against Page 3, this time spurred in part by a public sense that the mass-circulation press, tainted by scandal, is too powerful and should be reined in.

The "No More Page Three" campaign sent an open letter signed by more than 50 members of parliament to Dominic Mohan, editor of the Sun, which is part of News Corp's British newspaper division News International.

"We want to live in a society where the most widely-read newspaper is one that respects women," read the letter, posted on the campaign's website.

"Instead, the Sun publishes Page 3, which reduces women to objects. It reduces men to objectifiers. And it reduces this country to one that upholds 1970s sexist values. We're better than this."

During the Leveson inquiry into press standards last year, prompted by a phone-hacking scandal that forced the closure of the Sun's sister Sunday paper, the News of the World, Mohan said the photos "celebrate natural beauty".

"We're allowed to publish those images, and I think it's become quite an innocuous British institution where, as a parent myself, I'm more concerned about images that my children might come across on the Internet or on digital devices," he said.

But not all News International insiders agree. Former executive chairman Les Hinton, who resigned as head of Dow Jones during the phone hacking scandal, tweeted in response to Murdoch that "Page 3 has jarred for ages."

Murdoch bought the Sun in 1969 and rapidly turned it into an irreverent, muck-raking tabloid, introducing topless models within a year.

Initially featuring coy side-shots, the Page 3 photos later became more explicit, leaving little to the imagination. The picture is usually accompanied by a short text, quoting the model's improbable take on one of the issues of the day, often related to something the paper has been campaigning about.

A stint on Page 3 launched the careers of Samantha Fox, who went on to become a pop singer in the 1980s, and Katie Price, who as "Jordan" was known for her surgically enhanced bust and an infamous appearance on a reality TV show, and is now the name behind a number of books and perfumes.

Though the liberal intelligentsia loved to hate it, the Sun was embraced by the public and its sales rose. In common with other newspapers, it is losing readers, but it is still Britain's best-selling paper, shifting around 2.4 million copies a day in January.

Media commentators noted it was not the first time the Sun had mooted dropping Page 3.

"Murdoch is aware that, should he dare to follow his anti-Page 3 instincts, he may jeopardise the Sun's circulation," former Sun assistant editor Roy Greenslade wrote on the Guardian's website.

"He is ... caught between his desire to 'do the right thing' and commercial reality."

"Mellisa is furious that foreign aid money is being squandered on fat cat consultants," the accompanying text reads, before going on to quote the 19th-century religious writer Charles Caleb Colton.

The idea of printing pictures of semi-naked women to boost circulation was copied by other British mass-circulation papers as well as newspapers in other countries, although many have since stopped the practice.

Germany's top-selling Bild removed topless women from its front page last year - only for them to reappear on Page 3.

Women's groups have criticised the Sun's pictures as degrading since they were introduced, but are regularly vilified by the paper as dour and bitter.

Former minister Clare Short, who has campaigned against Page 3 since 1986, was described as "fat" and "jealous", a move that Mohan admitted during the Leveson inquiry was not appropriate.

"It's not probably something I would run now," he said.