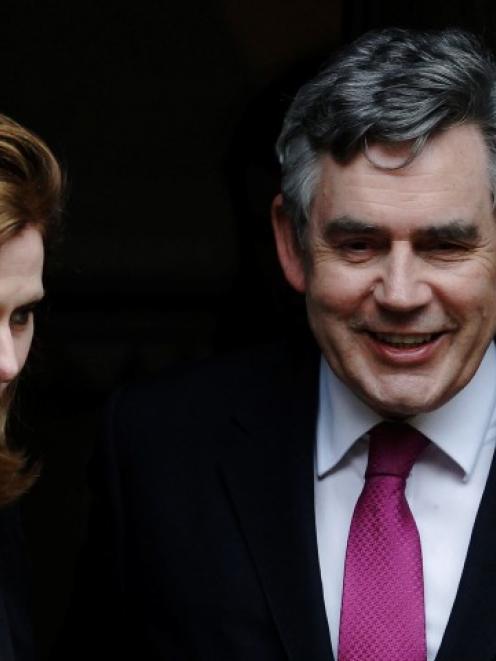 Murdoch told the inquiry earlier this year that the then Labour prime minister telephoned him in September 2009 after The Sun newspaper switched its allegiance to the Conservative Party and threatened to unleash war on Murdoch's company in revenge.

"This conversation never took place," Brown, who served as prime minister from 2007 to 2010, told the Leveson inquiry into media ethics at the Royal Courts of Justice. "I am shocked and surprised that it should be suggested."

"Mr Murdoch is wrong to assert under oath that I rang him in late September 2009, or around then," Brown said in a written statement to the inquiry. "His claim - that when The Sun switched support I called to complain and threaten him - has no foundation in fact."

A former British leader accusing Murdoch of misleading the inquiry under oath could further tarnish the reputation of the world's most powerful media tycoon in a country which is home to some of his biggest newspaper and broadcasting interests.

When pressed on how a serving prime minister could make such a threat, Murdoch had told the inquiry: "I don't think he was in a very balanced state of mind."

"We were talking more quietly than you or I are now - he said, 'Well, your company has declared war on my government and we have no alternative but to make war on your company,'" Murdoch told the inquiry on April 25.

Brown said Murdoch was wrong about the date and the contents of the phone call, and supplied records which showed he made just two calls to Murdoch in 2009, one in March and one in November. He said this was a complete list of calls to Murdoch.

Brown also submitted as evidence to the inquiry statements by five of his advisers that show none of the five heard Brown threaten Murdoch on the call in question, which Brown said focused on The Sun's coverage of the war in Afghanistan.

Aides, including Brown's special adviser, director of strategy and deputy chief of staff, said he made no such threat on the call, which took place on Nov. 10. Murdoch had said the call took place on Sept. 30.

"I listened to the phone call between Mr Brown and Mr Murdoch in November 2009," Stewart Wood, special adviser to the Prime Minister's office, said in a statement dated October 2011 that Reuters has seen.

"At no point in the conversation was threatening language of any sort used by either Mr Brown or Mr Murdoch," Wood said.

Lawyers cautioned that given the highly politicised nature of the case, it could be difficult to prove beyond all reasonable doubt who was telling the truth. Perjury carries a maximum prison sentence of seven years in England.

But the seriousness of Brown's claim could tarnish Murdoch whom a British parliamentary committee which investigated allegations of illegal phone-hacking by Murdoch publications has already deemed unfit to manage a major global company.

"It's got to the point that no one can tell quite what happened, but the fact that a former prime minister is dragging this into the public domain can't be good news for News Corp," Brian Cathcart, a founder of the Hacked Off group which led the campaign to have a judicial inquiry, told Reuters.

"Here is a former prime minister putting them back on the spot with what is a serious allegation that was made in court. It just won't go away," Cathcart said.

During his testimony, Brown also challenged a version of events given by Murdoch's lieutenant, Rebekah Brooks, about a Sun report that Brown's son Fraser had been diagnosed with cystic fibrosis.

Brooks, who was charged last month with interfering with a police investigation into the phone hacking scandal, told the inquiry the Browns had given their backing to the story.

"I have never sought to bring my children into the public domain," Brown said. He denied his consent had been given to publish the story. "I find it sad that even now in 2012 members of the News International staff are coming to this inquiry and maintaining this fiction."

The former prime minister had questioned whether the paper hacked into his son's medical records to get the story. Brooks has denied this and Murdoch has said the story was broken when the father of another child tipped off the newspaper.

Brown said a local National Health Service branch in Scotland had apologised to his family because information about his son came from NHS staff. "There were only a few medical people who knew that our son had this condition," Brown said.

He said the NHS in the district of Fife "now believe it highly likely that there was unauthorised information given by a medical or working member of the NHS staff that allowed the Sun through this middle man to publish this story".

Murdoch has described a relationship with Brown that included meals which their wives attended and conversations on topics ranging from charity to the war in Afghanistan.

Brooks told the Leveson inquiry she formed a friendship with Sarah Brown and that they had had a "pyjama party" at the prime minister's official country residence, Chequers, with Murdoch's daughter, Elisabeth, and his wife, Wendi.

But Brown said he never crossed a line in his relationship with Murdoch that would have allowed the tycoon to further his business interests at the expense of the public interest.

"I think you can serve up dinner but you don't need to serve up BSkyB as part of the dinner," Brown said of a failed $12-billion bid by Murdoch's News Corp to buy the rest of the lucrative pay-TV group BSkyB that it did not already own.