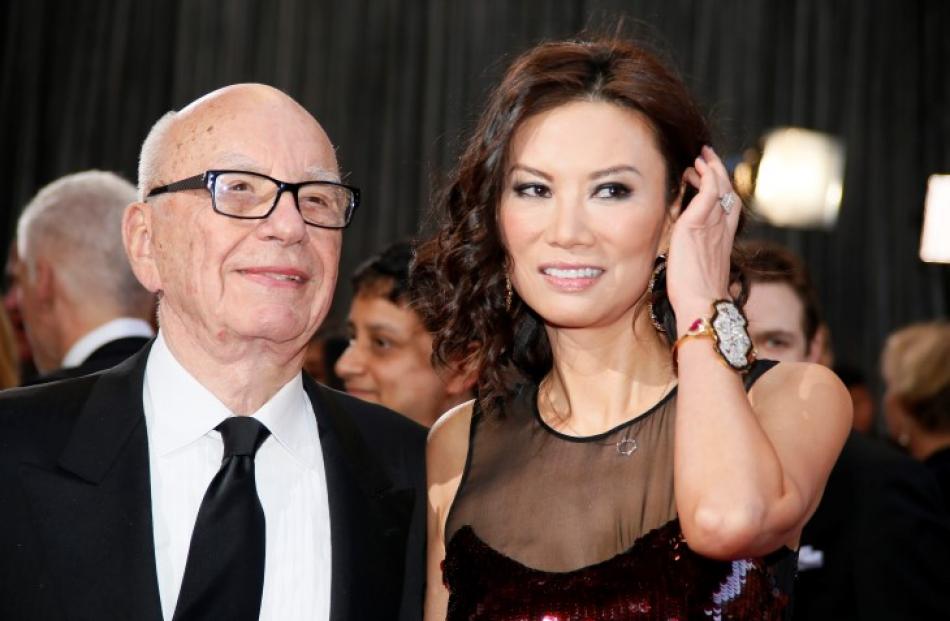 Rupert Murdoch arrives with his wife Wendi Deng at the 85th Academy Awards in Hollywood, California in February. REUTERS/Lucy Nicholson/File

He was the billionaire mogul and she was the beautiful former executive at his giant Asian media company Star TV who, when faced with a pie-throwing assailant, jumped to her feet and defended her man.

Unlike most fairytales, the marriage between News Corp boss Rupert Murdoch and Wendi Deng will not have a happy ending.

After months of rumours and denials the marriage was on the rocks, Mr Murdoch on Thursday filed for divorce in the New York Supreme Court.

The filing stated the "relationship between husband and wife has broken down irretrievably".

Mr Murdoch, 82, and Ms Deng, 44, married 14 years ago on the mogul's 50m yacht, the Morning Glory, in New York Harbour and the couple had two daughters, 11-year-old Grace, and nine-year-old Chloe.

It is Mr Murdoch's third failed marriage, with little time between divorces.

He divorced his first wife, Patricia Booker, in 1967 after 11 years of marriage and the same year he married Anna Maria Torv.

They were together for 31 years before their 1999 divorce.

Mr Murdoch has built a $US60 billion global media empire, and, ironically, earlier this week the company's shareholders voted to split the business into two publicly traded companies.

Ms Deng became a YouTube sensation in 2011 when she was sitting behind Mr Murdoch as he testified before a British parliamentary committee following the UK phone hacking scandal.

As assailant Jonathan May-Bowles approached with a pie aimed at her husband, Ms Deng, a former volleyball player, jumped to her feet and launched her right hand at Mr May-Bowles.

While a News Corp spokesperson said the divorce would have no impact on the company, Mr Murdoch's second wife Anna, who had daughter Elisabeth and sons Lachlan and James with Mr Murdoch, reportedly pocketed $US1.7 billion in the divorce, including $US110 million in cash.

Mr Murdoch's personal worth is estimated at $US8 billion.