No apologies as Obama steps up attack 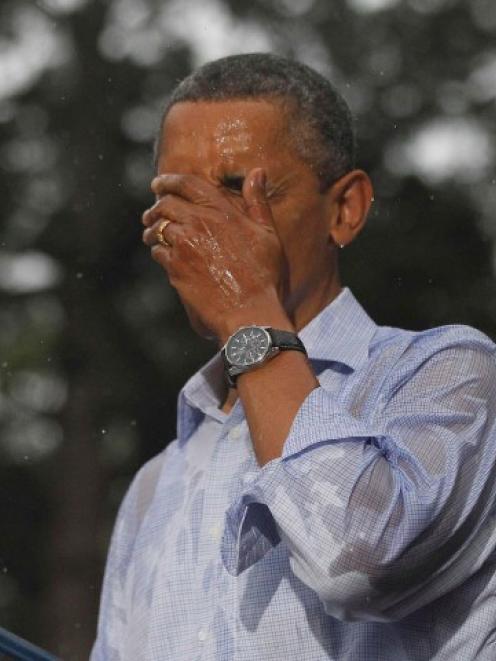 US President Barack Obama wipes rain off his face during heavy rainfall at a campaign rally in Glen Allen, Virginia at the weekend. REUTERS/Jason Reed
US President Barack Obama will not apologize to Republican presidential candidate Mitt Romney for raising questions about his tenure and the timing of his departure from private equity firm Bain Capital, the Democrat said in an interview.

Romney demanded an apology last week after Obama's campaign suggested he may have broken the law by misrepresenting his position at private-equity firm Bain Capital, part of an assault on the former executive's business career and personal wealth that may be hurting him in the polls.

"No, we won't be apologizing," Obama said in an interview with a Virginia television station WAVY.

"Stop whining," Emmanuel said on ABC's "This Week" programme. "If you want to claim Bain Capital as your calling card to the White House, then defend what happened at Bain Capital."

Romney has argued that the economic expertise he developed as an investor, manager and consultant make him a better choice than Obama to kick-start an economy that has been slow to recover from the 2007-2009 financial crisis.

But Romney's record at Bain is also shaping up to be something of a liability. Democrats have highlighted companies that went bankrupt or shipped jobs overseas under Bain's ownership to argue that Romney is only concerned with helping his fellow millionaires, not working people.

Romney's campaign has said he should not be held responsible for many of those decisions because they occurred after he took a leave of absence from Bain in February 1999 to oversee the 2002 Olympic Winter Games in Salt Lake City.

But Romney continued to claim in regulatory filings that he was still in charge of Bain through 2002, according to documents that have surfaced over the past week. Bain and Romney officials say it took several years to sort out the terms of his departure but that he was not involved with the company's day-to-day operations during that time.

"He actually retired retroactively at that point. He ended up not going back to the firm after his time in Salt Lake City," Romney senior adviser Ed Gillespie said on NBC's "Meet the Press" programme.

Obama's campaign has accused Romney of being responsible for the firing of workers and bankruptcies at Bain-owned companies during those years.

"So, you know, as president of the United States, one of the things I've learned ... was anything that happens on my watch is my responsibility. That's what people expect. Harry Truman said 'the buck stops with me' and I think, understandably, people are going to be interested in are you (Romney) in fact responsible for this company that you say is one of your primary calling cards for your wanting to be president," Obama said in the interview.

An Obama spokeswoman suggested last week that Romney could have committed a felony if he signed forms saying he was in charge of Bain when he was not -- which prompted the apology demand from Romney.

Democrats have also criticized Romney for setting up bank accounts in offshore tax havens and refusing to release more information about a personal fortune that is worth as much as $250 million.

The attacks may be resonating with voters at a time when Romney is still largely undefined in the eyes of the public. Several polls released in June found that Romney's negative ratings have risen in states where Obama and Democratic groups have attacked the former Massachusetts governor.

Romney allies said the attacks were an attempt to distract voters' attention from the fact that Obama has failed to counter high unemployment and sluggish economic growth during his three and a half years in the White House.

"The president can talk all he want about this, but it's the economy and jobs that are going to address this election," Republican Senator Kelly Ayotte, seen as a possible vice presidential running mate for Romney, said on ABC's "This Week" program.

The Romney campaign released a new television ad relying on footage of journalists talking about how Obama's negative tactics this year contrasted sharply with the message of hope and change he campaigned on four years ago.

"This is not the candidate of hope and change, this is a candidate who is hoping to change the subject," Republican Representative Paul Ryan, another possible vice presidential candidate, said on CBS's "Face the Nation."