Nth Korea leader looking to bond with his people 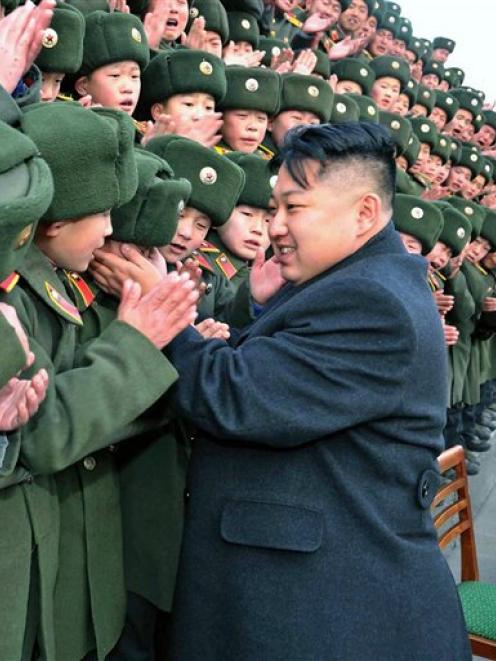 Kim Jong Un seems to want to bond with his country's people.

The style harkens back to Kim Il Sung, his grandfather and revered founder of the country and ruling dynasty, and may reflect an attempt to turn a corner on the periods of hardship and famine under Kim Jong Il, analysts say. Kim Il Sung's image as a daring young general fighting Japanese colonial troops is powerfully engraved in the minds of North Koreans.

Cheers, applause and calls of "Hurrah!" greet Kim Jong Un as he examines the heating systems of soldiers' quarters, the pressure of their water faucets, the books stacked in their libraries - even the taste of their food.

The North Korean state media reports and video footage of such "guidance visits" provide rare windows into the personalities of North Korea's leaders for outsiders and for the country's people alike. Few North Koreans, for instance, even knew what the elder Kim's voice sounded like, analysts say, despite his ruling for 17 years until his death Dec. 17.

In visits made so far by Kim Jong Un, believed to be in his late 20s, North Korea specialists have detected more warmth in his approach than the dour tours made in recent years by Kim Jong Il.

The younger Kim may be trying to emulate Kim Il Sung and move away from his father, who ruled during a famine in the mid- to late-1990s that killed hundreds of thousands, said Koh Yu-hwan, a North Korea professor at Seoul's Dongguk University. North Korea also has faced international condemnation and sanctions for its pursuit of nuclear weapons.

"He'll try to look comfortable among the masses. He'll try to form an intimacy with the people, perhaps more than his father did," Koh said.

Kim Il Sung often was pictured surrounded by children, and Kim Jong Un resurrected that image during a recent visit to the Mangyongdae Revolutionary School.

As children in military uniforms cheered and clapped, a documentary on state TV showed Kim embracing one child's face with his hands. During lunch, Kim patted students in encouragement and watched with a grin as two women ladled out soup for students; he poured a drop of sauce on his thumb so he could taste it.

His main emphasis, however, has been on military posts - with a half dozen such visits since the New Year. They seek to show citizens that their new leader is firmly in command of the country's most important institution, its 1.2 million-strong military, and that he is loved and respected by young troops and elderly generals alike.

While Kim Jong Il had two decades to prepare for leadership, Kim Jong Un was only publicly unveiled as heir in 2010, and outside observers have raised doubts about Kim Jong Un's ability to lead a country locked in a nuclear standoff with its neighbors and Washington and with a history of attacking South Korea.

Animosity is still high between the Koreas. Six decades after the Korean War, the peninsula remains in a state of war because the 1950-53 conflict ended with an armistice, not a peace treaty. About 28,500 U.S. troops are stationed in South Korea to deter potential North Korean aggression.

Kim Jong Un clearly has made attempts to appear active and engaged with his soldiers, and this "helps raise troops' morale and his profile," said Kim Yeon-su, a North Korea expert at Korea National Defense University. "North Korea is telling its people that Kim Jong Un is capable of doing all these military activities himself."

State television has also played a documentary on Kim Jong Un meant to highlight his military experience, showing him in the cockpit of a tank, galloping by on horseback and poring over documents at night.

Despite his youth, Kim Jong Un often plays the part of a solicitous father during his meticulously documented military tours.

Wearing a dark overcoat similar to one Kim Il Sung favored as a young man or a light-colored parka like the one Kim Jong Il wore, he exchanges handshakes with cheering soldiers and takes group photos, often holding hands with the officers on either side of him.

He asks about the soldiers' warmth, their eating and sleeping arrangements, listens with apparent enjoyment to their musical performances, observes their "militant spirit of training," offers guidance to officers and takes "care of the soldiers' living as their real father would do," according to state media.

He even tastes their bean paste.