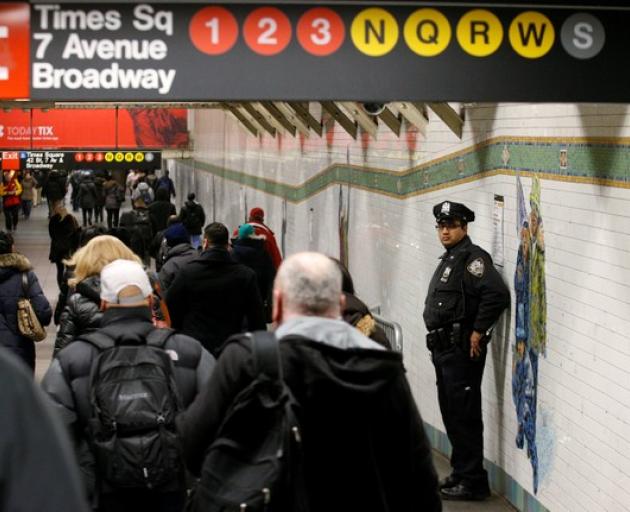 New York police will adjust security plans for the traditional New Year's Eve celebrations attended by hundreds of thousands of revelers in Times Square after a botched suicide bombing in a subway tunnel beneath the famous district, the city's counterterrorism chief said on Tuesday (local time).

The New York Police Department will conduct both an immediate and an in-depth review of Monday's incident for lessons on how to deal with this type of attack, said John Miller, deputy commissioner for intelligence and counterterrorism.

"This is the first time I believe that we have seen an individual with a suicide bomb in mass transit and actually have that bomb function. So we're going to take a hard look at it," Miller told Reuters in an interview.

The New Year's security plan will also consider other attacks such as the Las Vegas sniper shooting on October 1 that killed 58 people and wounded more than 500, Miller said.

On Tuesday, a 27-year-old Bangladeshi man was charged in federal court with terrorism crimes for detonating a pipe bomb in a pedestrian tunnel beneath Times Square.

Chemicals inside the pipe bomb ignited, but the pipe itself did not explode, officials said, limiting injuries to the suspect and three bystanders.

As a result, New Yorkers will see an increased police presence around mass transit and places where people gather, Miller said. He did not elaborate on the specific measures.

In the short term, that will mean more heavily armed and specially trained police officers in the streets, in addition to more police dogs, bag screenings and checkpoints, said Kevin Harrington, a former NYPD chief in the detective bureau who is now chief operating officer of the private firm MG Security Services.

"You'll see bigger guns and a significant increase in officers who are highly trained to use those weapons," Harrington said.

After the attacks of September 11, 2001, the NYPD created what security experts consider are the world's most robust intelligence and counterterrorism units among municipal police forces, examining every politically motivated attack on civilians across the globe to improve New York's defenses.

The NYPD cooperates with foreign police to share intelligence and tactics, embedding its own officers in 13 police forces around the world.

The system is put to the test every December 31 in Times Square at the party to ring in the new year, requiring one of the most complex security operations that Harrington calls the NYPD's Super Bowl.

"The security plan for that is going to take in a number of factors, including the sniper factor from Las Vegas," Miller said. "The suicide bomb factor has been a part of the screening there for many years."

In the Las Vegas shooting, a 64-year-old American named Stephen Paddock opened fire on a music festival from his 32nd-floor hotel room. Investigators have yet to assign a motive to Paddock, who killed himself in the hotel room.

Times Square is surrounded by tall buildings with similar vantage points over the crowd.

Police already work closely with the internal security teams at office towers in Times Square, some of which increased the security presence in the lobbies of their buildings after Monday's attack.