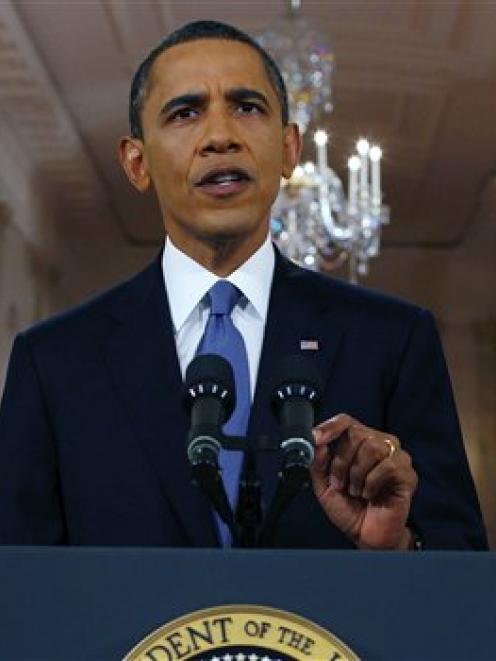 US President Barack Obama delivers a televised address from the White House in Washington on his plan to withdraw US troops from Afghanistan. (AP Photo/Pablo Martinez Monsivais, Pool)
Beginning to wind down a long and devastating war, President Barack Obama has announced he is pulling home 33,000 US troops from Afghanistan by early next year, withdrawing the "surge" of forces he had sent to rescue a flailing effort.

To a country eager for an exit, Obama said: "The tide of war is receding."

A total of 10,000 troops will leave the war zone by the end of this year - fulfilling Obama's promise for a withdrawal starting next month - and more than 20,000 additional forces will leave by the (northern) summer of 2012, shortly before the president will go before voters in search of a second term.

Still, almost 70,000 US troops will remain in an unstable country, fighting in a war bound to see more Americans killed. Obama said they will leave at a steady pace, but the US combat mission is not expected to end until December 2014 - and even then, a sizable and enduring contingent may remain in a different role.

Obama's announcement from the White House came in a perilous political environment, with Americans soured on the war and the economy, many members of Congress pushing him to get troops home even faster, and his Republican presidential rivals taking shots at his leadership at every chance.

"I am glad this war is ending, but it's ending at far too slow a pace," said Sen. Barbara Boxer, D-Calif. Added the House Democratic leader, Nancy Pelosi of California: "We will continue to press for a better outcome."

At least 1500 members of the US military have died and 12,000 have been wounded since the war began in late 2001. The financial cost of the war has passed $US440 billion and is on the rise, jumping to $120 billion a year. Those costs have risen in importance as a divided US government struggles to contain its soaring debt.

Conceding the economic strain of waging war at a time of rising debt and fiscal constraint, Obama said it was time for America "to focus on nation building here at home." The president's chances for re-election rest largely on his ability to show faster job growth in a time of deepening economic pessimism.

The withdrawal is supported by the bold bottom-line claims of his security team: Afghanistan, training ground for the September 11, 2001, attacks on America, is no longer a launching pad for exporting terrorism and hasn't been for years. But that could also fuel arguments for even greater withdrawals by voters wondering what the point of the war is after all these years, especially since the face of the enemy - al-Qaeda leader Osama bin Laden - was killed by American forces this spring during a raid in Pakistan.

Yet the White House insists the US must maintain a strong fighting force in Afghanistan for now to keep the country from slipping back into a haven for al-Qaeda terrorists.

The initial withdrawal is expected to happen in two phases, with 5000 troops coming home this summer and an additional 5000 by the end of the year.

Obama will visit troops on Thursday at Fort Drum, the upstate New York Army post that is home to the 10th Mountain Division, one of the most frequently deployed divisions to Afghanistan.

He said materials recovered during the raid to get bin Laden showed that al-Qaeda was under deep strain. He said bin Laden himself expressed concern that his organization would be unable to effectively replace senior leaders that had been killed.

The president declared, "We have put al-Qaeda on a path to defeat, and we will not relent until the job is done."

Even after the troops come home, the war will remain expanded on Obama's watch. He approved 21,000 additional troops for Afghanistan shortly after taking office in 2009, bringing the total number to 68,000. That means he is likely to face re-election with more troops in Afghanistan than when he took office, although he has also dramatically reduced the US footprint in Iraq.

The president spoke for just under 15 minutes from a silent East Room. It was a strategic moment for him to try to explain a turning point in the war effort without elevating it to a major Oval Office address - more of a stay-the-course case of progress and resilience.

"Of course, huge challenges remain," the president said. "This is the beginning - but not the end - of our effort to wind down this war. We will have to do the hard work of keeping the gains that we have made while we draw down our forces and transition responsibility for security to the Afghan government."

Significant questions still loom, including whether an Afghan government marred by corruption will be up to enormous job ahead.

Regardless, Obama made it clear the United States was ready to move on from a decade defined by wars in Afghanistan and Iraq, at a cost at of thousands of lives lost and more than $1 trillion spent. "We will not try to make Afghanistan a perfect place," Obama said flatly.

Potential GOP presidential candidates were quick to weigh in with criticism of Obama's plan - but they did not speak with one voice.

Former Massachusetts Gov. Mitt Romney accused Obama of proposing an "arbitrary timetable" and said the decision on withdrawing troops "should not be based on politics or economics." Former Utah Gov. Jon Huntsman said the approach in Afghanistan should be focused on counterterrorism, "which requires significantly fewer boots on the ground than the president discussed tonight."

Back on Capitol Hill, Sen. John Cornyn, R-Texas, accused Obama of acting based on political considerations. "I am increasingly concerned by the lagging public support for the mission, and it was disappointing that the president failed to bring more clarity to the situation," he said.

Obama argued that reinforcements he sent have accomplished their mission: eroding the capacity of Taliban insurgents, diminishing the al-Qaeda network and providing time and training for Afghanistan's forces to take charge.

Most Americans oppose the war in Afghanistan and are far more concerned about the teetering economic recovery at home.

Military commanders favoured a plan that would allow them to keep as many of the 30,000 surge troops in Afghanistan for as long as possible, ideally through the end of 2012. That timeline would have given them greater troop strength through two crucial fighting seasons.

Many Afghans are eager to see the Americans leave, yet there are big risks for the government there.

"There will be some battles, there will be suicide attacks and bomb attacks," acknowledged Defence Ministry spokesman Gen. Mohammad Zahir Azimi. "But we in the Afghan forces are prepared to replace the foreign forces, and I'm confident the army has enough capacity and ability."

USofficials have been saying for several years that al-Qaeda's safe havens had shifted from Afghanistan to Pakistan. While there has been some success in degrading the terror network in Pakistan, there are still deep concerns among US officials about Pakistan's commitment to fighting terrorism.

"So long as I am president," Obama said, referring to Pakistan, "the United States will never tolerate a safe haven for those who aim to kill us. They cannot elude us."